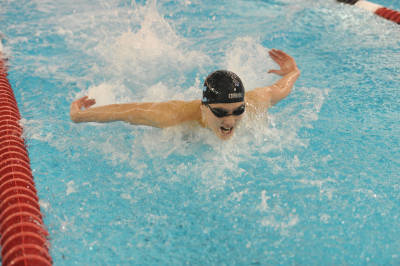 The Columbia men’s swimming and diving team traveled to Annapolis, Maryland over the weekend to confront the U.S. Naval Academy in its home pool. The Midshipmen won ten events and outscored the Lions 157-140 and in the process ended its dual meet season with a 7-4 record. Columbia’s last dual meet will take place on Friday, February 7 at Princeton.

In the 1000 free, Thomas Duvall (9:22.35) and Alex Nickell of the Mids took first and second, while three Lions (Harry Stephenson, Nikita Bondarenko, and Jack Foster) all touched with a half second of each other.

Navy’s Bomberger (20.84) narrowly won the 50 free ahead of Philipp Gaissert and Ngan of Columbia. Jakl won the 100 free with his signature strong second half: tied for fifth at the 50 he negative-split the race and ended up .15 ahead of Navy’s Hugh Davison.

The 200 back went to the Mids’ Conor Campbell (1:50.16). Quinn of Columbia finished second with a strong final 50. The Navy breaststroke trio got another sweep in the 200; this time Hoffer (2:01.94) touched out Murphy by .08, while Brutkiewicz got the bronze again.

Navy took the top two spots in the 500 free with Duvall (4:32.50) and Nickell over Columbia’s Bondarenko. Not taking any more chances, Jakl led wire-to-wire en route to winning the 100 fly in 49.50. Navy’s Debaugh was second.

The two teams split diving points. In three-meter diving, Columbia’s Micah Rembrandt (340.50) outscored Midshipmen Ben Freedman and David Principato, whereas in the one-meter, Freedman (310.95) came out on top, followed by Rembrandt and Principato.