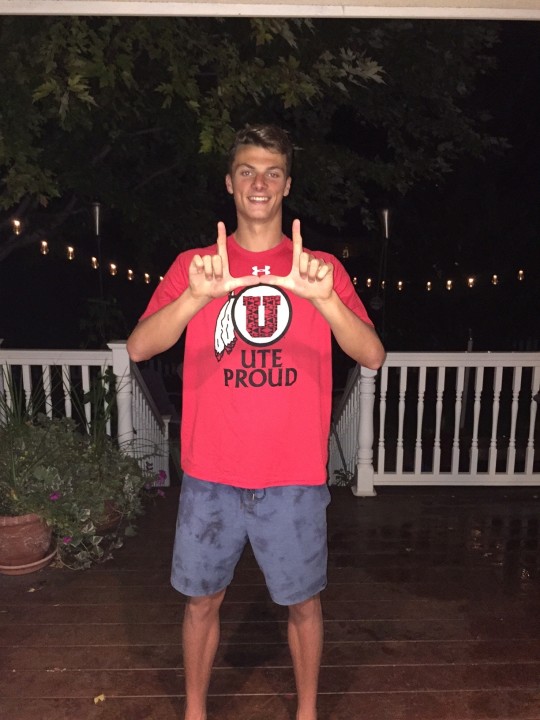 The Utah Utes have received a verbal commitment from Loveland Swim Club’s (CO) Brody Lewis. Lewis is a breaststroker who also... Current photo via Brody Lewis

The Utah Utes have received a verbal commitment from Loveland Swim Club’s (CO) Brody Lewis. Lewis is a breaststroker who also excels in longer distance freestyle. He recently won the 100 breaststroke at the Colorado HS 5A Championships; he also placed 6th in the 200 IM as he represented his high school, Greeley West.

The emboldened times above indicate Winter National cuts– Lewis’ 56.40 qualifies for Winter Jr Nationals, though. What’s notable about Lewis is his big time drops from last year to this year. Take a look at the chart below:

This is some serious speedin’ up, and Utah will be looking to add depth to a breaststroke core that doesn’t really go more than 2 guys deep. In the 100 breast finals at last year’s Pac-12 Championships, they got two 54s from freshman Jack Burton and sophomore Keanu Interone, then nothing under 57 seconds after that. Burton also led Utah in the 200 breast with a 1:57.81, but the only other Ute under 2 minutes was current senior Brandon Young, who will have graduated by the time Lewis gets to campus.

There’s always the question of whether or not a high schooler who has been improving will go on to continue doing so at the same rate (or even keep improving in the first place), but if Lewis can cut some more time off of his breaststroke bests, he will be in contention to score some individual points for the Utes in his first year on campus.

Brody is a high character team leader – Nice addition for any team
We love the guy – Loveland Swim Club!

Utah has made a wise decision in recruiting Brody Lewis to their men’s swimming team for 2016-2017. He is a standout swimmer who has proven that hard work pays off – the proof is in his times from last year to this year, especially at the Colorado 5A State Championships. He is a well-rounded student who also excels in the classroom. His work ethic will continue to lead him to success in and out of the pool. Congratulations to Brody Lewis and Utah!