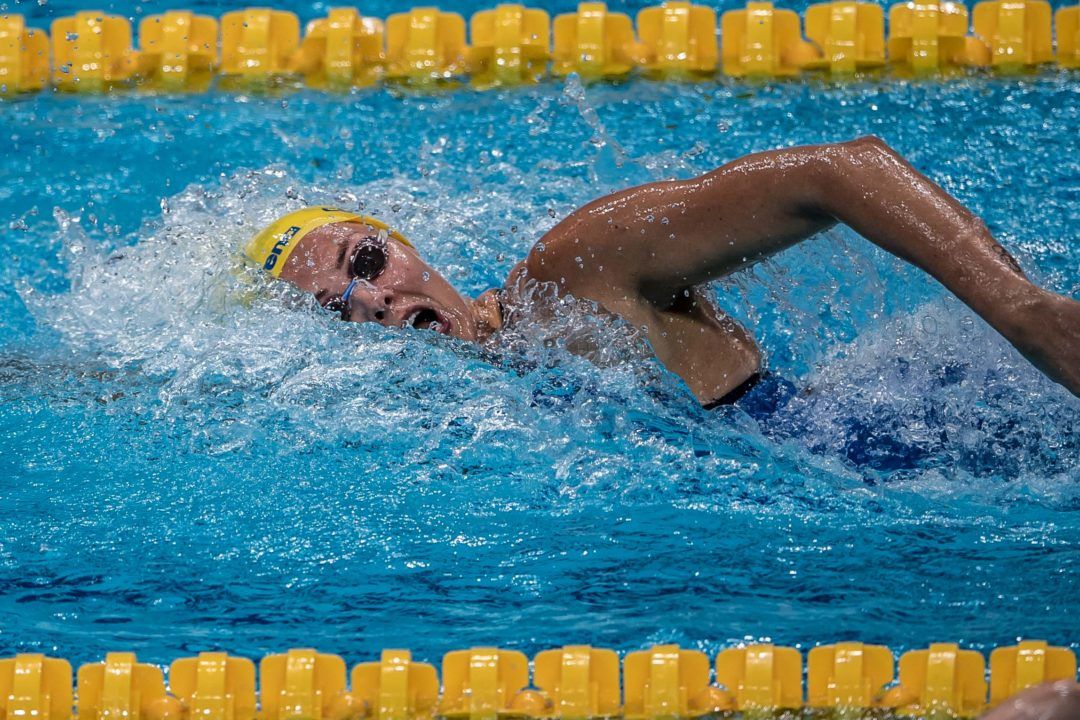 The FINA World Cup Series continued with day 1 of its stop in Berlin, Germany, with the meet representing the 2nd of just 2 cities in this cluster. Entering this meet, Hungarian Katinka Hosszu leads the women in the overall FINA World Cup points standings, while Russian Vlad Morozov has the lead over the men.

As with the previous stop in Budapest last weekend, this World Cup meet runs concurrent to an International Swimming League (ISL) meet, meaning a noticeable contingent that could have competed here will instead be representing their squads in Naples, Italy. The ISL teams included in this weekend’s Italian meet carry over from Indianapolis and include the Aqua Centurions, Energy Standard, Cali Condors and DC Trident.

Dutch backstroking ace Kira Toussaint wasted no time getting down to business, firing off a new national record in the women’s 50m back. The 25-year-old already nailed a new mark last week in Budapest, registering a winning time of 27.68 to overtake a supersuited record from 2009.

Tonight, however, Toussaint managed to shave off another .19 to score an even lower Dutch NR of 27.49, representing the only woman of tonight’s field to venture into sub-28 second territory. You can read more about Toussaint’s record-setting performance here.

Another mainstay on this World Cup Series scene thus far was back in the water as well, as Japanese Olympian Ryosuke Irie did his thing in the men’s 200m backstroke. Touching the wall first in a time of 1:56.46, the man earned the 2nd 1:56-mark of the cluster, paired with his 1:56.79 from Budapest last week.

His time this evening beat out the field by over 3 seconds and even surpassed his outing of 1:56.52 produced at this summer’s World Championships in Gwangju, Korea that rendered him the 5th place finisher.

Hosszu has won the overall World Cup title 5 times over the course of her career and is quickly approaching the 300 World Cup gold medal mark. She added another top medal result to her tally when finishing first tonight in the women’s 200m fly.

Rounding out the top 3 200m fly finishers tonight was Austria’s Claudia Hufnagl. Hufnagle touched in 2:10.57 to come within .25 of her own lifetime best of 2:10.32 notched just this past June at the Mare Nostrum Tour in Barcelona.

Like his performance last week in Budapest, Milak opened his race in 3rd place, spitting 24.51 before firing off a quick back-half time of 27.27 to produce the only sub-52 second outing of the field. Last week in his home nation he touched in 51.27.

Runner-up tonight, however, was Jakub Majerski of Poland, upgrading his bronze from Budapest. Last week the young Pole touched in a time of 52.34 and he was just .03 off of that outing this evening with a mark of 52.37.

Hungarian Sebastian Sabo, a former Serbian competitor, touched tonight in 52.52. That’s well off his 51.28 mark from the Singapore World Cup.

Despite holding a personal best of 51.73 from last year’s Sette Colli, Northwestern University-bound Italian National Record holder in the 200m fly, Federico Burdisso, hit the wall in 53.19 for 7th. At the World Championships, Burdisso clocked 52.65 to finish 19th out of the heats in this 100m fly event but registered his Italian standard in the 200m fly of 1:54.39 en route to 4th place.

Milak took the 400m free silver earlier in tonight’s session, tying Germany’s Florian Wellbrock with a time of 3:48.98. Danas Rapsys was the winner of the event, touching in 3:47.65. He already owns the World Cup REcord with the 3:43.91 he collected in Jinan back in August.

A pair of Spaniards led the women’s’ 200m breaststroke field, as Jessica Vall and Marina Garcia Urzainqui made it a 1-2 finish in respective efforts of 2:27.14 and 2:27.82. They were joined on the podium by Slovakia’s Nikileta Trnikova, who produced a mark of 2:28.91 for bronze.

Trnikova set her nation’s standard at 2:27.96 when she finished 7th in this 200m breast event at the 2019 World Junior Championships.

Of note, Italian Ilaria Cusinato placed 8th tonight in the 2breast event, clocking a time of 2:33.78.

Cusinato had earlier raced in the first event of the evening, the women’s 400m free, where the Italian touched in 4:14.54 to claim 6th place. Topping the podium in the mid-distance free event was Czech Republic teen Barbora Seemanova.

Seemanova stopped the clock in a quick 4:10.06 to just out-touch Aussie Maddie Gough by only .07. Gough had led the majority of the race, but fell just shy at the end, settling for silver in 4:10.13. Gough has been as fast as 4:08.09 time from the Singapore stop.

Rounding out the top 3 in the women’s 400m free tonight was Canada’s Aly Ackman, who notched 4:11.25 for bronze. Ackman took the same result at this summer’s Pan American Games, but was slower there in Lima, Peru, mustering 4:12.05.

Dutch breaststroker Arno Kamminga is showing no signs of slowing down, coming within .10 of his own national record in the 100m distance of the discipline. Kamminga fired off a time last week in Budapest of 59.05 to check-in with a new National Record and he was just outside that time this evening, hitting the wall in 59.15. Splits for Kamminga tonight included 28.08/31.07.

Serbian national record holder in the event, Caba Siladi was also under the minute mark, registering a time of 59.71 for silver. He owns his nation’s standard with the 59.40 he produced at the Hungarian National Championships this past March.

25-year-old Michele Coleman of Sweden pulled out a mild upset in the women’s 50m freestyle, beating out World Championships medalists Ranomi Kromowidjojo and Cate Campbell. Coleman entered this meet with a lifetime best 50m free time of 24.56 from just last week in Budapest but found another gear to hack that mark down to 24.26 for the win.

For Coleman, she now checks-in among the world’s top 20 all-time performers, tying Canada’s Taylor Ruck in the 20th slot.

C1 was the bronze medalist in this event in Gwangju, earning a time there of 24.11, while Kromo was also in the final, producing a time of 24.35 for 6th place.

Russia’s Vlad Morozov proved once again he is the man to beat in the 50m freestyle over the World Cup circuit, putting up another big 21-pointer of 21.55. He was 21.50 last week in Budapest and already as quick as 21.27 this year, the World Cup Record.

Breaking the 22-second barrier as well was Japan’s Kosuke Matsui, the 25-year-old who only just broke the monumental threshold last month. While competing at the Japanese National Sprots Festival, Matsui ripped a PB of 21.88 and was withing striking distance of that time tonight with a silver medal-earning 21.93.

American Michael Andrew got on the board with bronze in a time of 22.03 tonight to close out the session.

Are there any free live streams for the World Cup meets

I do not think so, except maybe in Germany. The results are here: https://www.omegatiming.com/2019/fina-swimming-world-cup-berlin-live-results

On a different topic, is everyone now going to comment on Conor Dwyer ? Cause they tore Shayna Jack and Australian team management to absolute shreds for not revealing why she didn’t swim at worlds ( it was so her teammates weren’t distracted from the task at hand ) .

When ISL states repeatedly : times are not important; no times, no times. And swimmers like Dressel sings in unison : “I like when it’s not about times”. Then FINA learned hard on own mistakes and promotes high performance in at least one race per stop no matter what event is. That equals chances of multiple events swimmers with the swimmers that are swimming a few or even only one event but are doing it at the world record level.
So times or points? Tough decision. No, I will stay with times. To watch the genuine excitement of winning in competition I will go to the high school meet. From competition of elite world class swimmers I would expect… Read more »

But I think it is all about times. If you look back the past 30 or so years, the pools got perfected, the swimmers have gotten different swimmings suits, rules changed, swimmers even shave now, etc., the descision makers and swimmers do all kinds of things to get better and better times. Sometimes I wonder what the real times would be in the old pools and normal swimming suits…

Think it’s a pretty fair comment.
Swimming is about data, and lots of it. Crazily nobody wants to let the general public into stroke rates, meters per seconds, dressels ground breaking underwater sped compared to others.
Just saying take the stats live out of baseball, basketball, cricket, nfl and you will loose a lot of audience.
I really wonder when promoters and media will wake up to this.
I am a bit over a split and commentary same old same old.

Go Coleman! One more freestyler and Tokyo relays might be fun

34-year old Ida Marko-Varga announced her – second – comeback only a couple of weeks ago, aiming to make the Swedish 4×100 free team in Tokyo and her fifth Olympics. I doubt she’ll ever break 55 s again though, so hopefully one of the youngsters can make some drastic improvements over the next nine months – Hanna Eriksson has 56.01 this season (Swim Open) and Hanna Bergman had 56.24 at last years Europan Juniors (she hasn’t broken 57 s this year though)