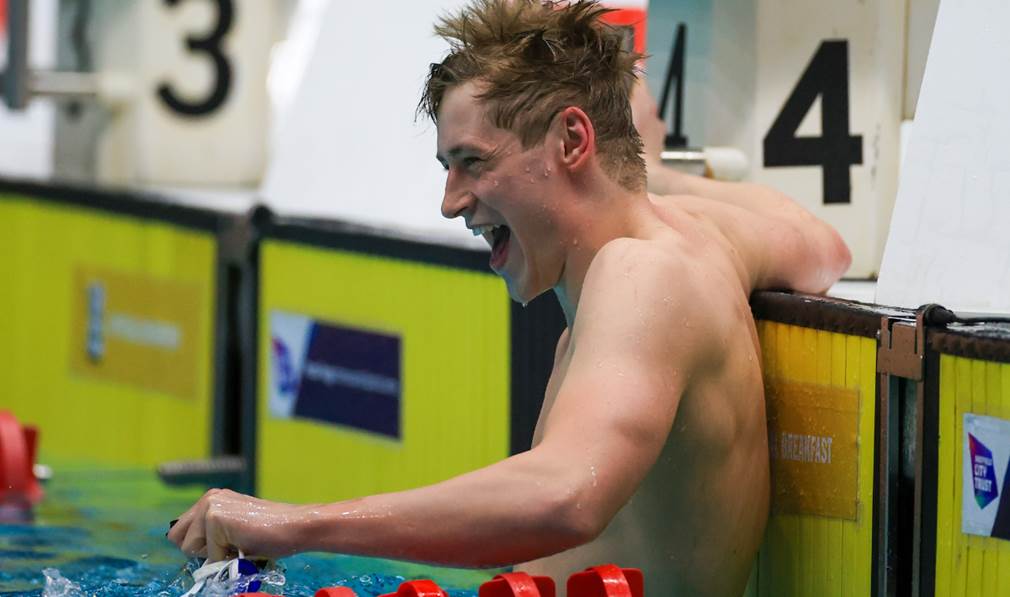 Stephen Clegg set a stunning new S12 world record in the men’s 100 fly to bring the curtain down on the British Para-Swimming International Meet in style.  Current photo via British Swimming

The two took us through competing at their first meet since the pandemic and what competition and Paralympic qualification will look like moving forward.

Andre Brasil and CPB Lose Lawsuit Against IPC After Reclassification

The German courts have sided with the International Paralympic Committee regarding 14-time Paralympic medalist Andre Brasil’s reclassification as ineligible.

Stephen Clegg set a stunning new S12 world record in the Men’s 100m Butterfly to bring the curtain down on the British Para-Swimming International Meet in style.

Clegg had threatened a fast time by going close to his own British record in the morning’s heats – and the Chris Jones-coached sprinter paced his finals swim to perfection, staying strong all the way to reach the wall in 56.75, nine hundredths of a second under the previous best, set by Russia’s Roman Makarov in 2013.

Unsurprisingly, that world record effort earned Clegg World Para Swimming World Series gold on the night, as well as sending him well under his classification’s Paralympic consideration time, while S14 athlete Reece Dunn hit yet another consideration time of his own, touching in 56.19 for 910 points to Clegg’s 1004.

“I’m buzzing with that time. No-one can ever really complain with a world record!” said 25-year-old Clegg, a silver medallist in the S12 100m Butterfly from the 2019 World Championships.

“Obviously everyone wants to give it their best and I think I do have a little more to give through the season, but it’s a great starting point to the year with the first main competition of the season and a great building block for the next five months to come.

“The reaction to the world record was great. I wasn’t expecting much of a reaction at all because there aren’t many people here with the COVID restrictions and people heading home with it being the last day – but it was great to hear all my teammates and staff get behind me as I finished, it was really nice to hear.

“I’ve been doing a lot of work this season around that 100m Butterfly, which has been my main focus. Everything is really clicking on all my events, even the ones I’ve not really worked on that much. I thought I was in a good place to do something pretty special with that 100m Butterfly and I’m glad I was able to do that, but I think I’ve got a lot more to give throughout the year.”

The Women’s MC 100m Butterfly also served up an impressive effort by Louise Fiddes, who recorded her second Paralympic consideration time of the meet on her way to victory. Fiddes had already gone under the S14 100m Breaststroke time – and after coming close with a controlled effort in the heats, she clocked a 1:07.21 to go three tenths under the consideration requirement for this event.

For Fiddes, her final night win was something of a bonus after meeting her main target earlier in the week.

“I’m really pleased. Some of the races weren’t quite how I wanted, but today I was really happy and I really just enjoyed being here, being with the team, seeing everyone – it was a really nice meet,” she said.

“It honestly feels a bit like a dream, because it’s been such a long time since I’ve seen most of the members of the team, it does make it seem so much more fun and real to be all together and racing again.

“The 100m Breaststroke was my main focus, this one was a little bit of a surprise, the 100m Butterfly. I don’t really enjoy doing fly, I think it’s just all the gym work I’ve been doing, it just all came together. The 100m Breaststroke is everything I think about, from the minute I get up to the minute I go to sleep, that event is everything to me.”

The final night of action at Ponds Forge had earlier got off to a fast start in the Women’s MC 50m Freestyle showdown. Tully Kearney built on a strong heat effort to claim World Series silver, narrowly missing out on her S5 British record by touching in 36.52, to notch up 948 points.

Hannah Russell (S12) has been in fine form all week, and the Graeme Smith-coached athlete also broke the 900-point mark, her time of 27.65 earning her 920 points for third. That pacey effort also saw her under the S13 consideration time for Paralympic selection, with no S12 50m Freestyle on the programme at the Games. Jonne Moleman of the Netherlands (S4 – 961) was the overall winner.

Meanwhile, the morning heats saw Lyndon Longhorne round out a memorable few days by setting his fifth S4 British record of the meet, a time of 45.26 in the Men’s MC 50m Freestyle heats going under the previous mark set in 1999 by Paul Johnston.

“It’s been a very busy week, going from classification on Sunday and being down here for a week. It’s been crazy, the build-up, four weeks in the pool, to now taking five British records – it’s been more than I expected! I wasn’t expecting to get any British records, to be honest with you, so to get all of them, it’s been a massive achievement,” he said.

“I’ve over-exceeded, everyone’s absolutely buzzing with my performances. Thanks to my home programme, Derwentside, the coaches up there and British Swimming to get me down to Manchester for a solid four weeks of swimming and ready for this.”