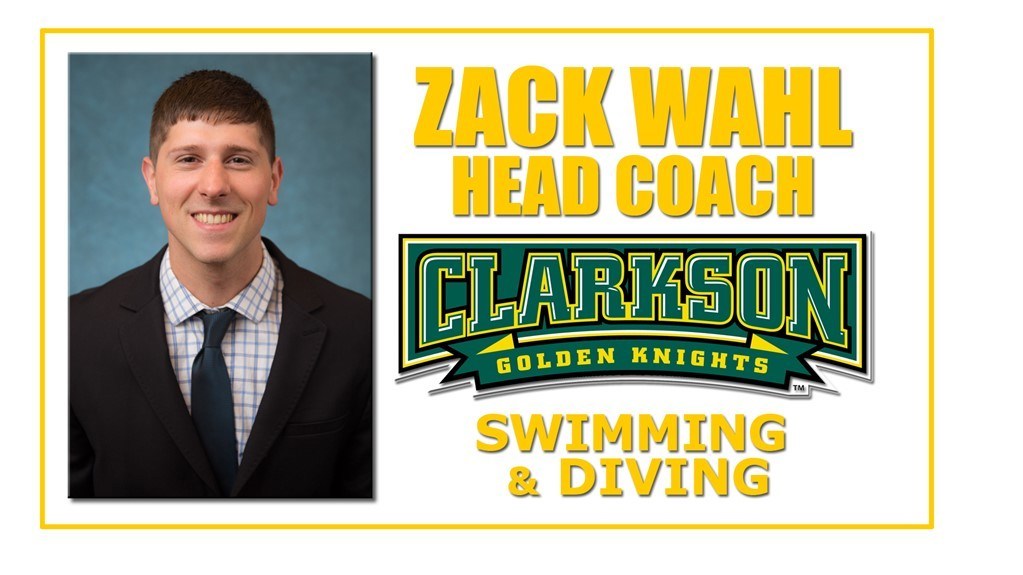 The Clarkson University Athletic Department is pleased to announce the hiring of Zack Wahl as the new head coach for the Golden Knights' Swimming & Diving program for the 2018-19 season. Current photo via Clarkson Athletics

The Clarkson University Athletic Department is pleased to announce the hiring of Zack Wahl as the new head coach for the Golden Knights’ Swimming & Diving program for the 2018-19 season.

“We are excited to have Zack joining our staff,” Clarkson University Athletic Director Steve Yianoukos said. “As an outstanding swimmer at Union and his previous coaching positions, he has both the understanding of the Liberty League and the technical knowledge to take over a program that has a longstanding tradition. He will be a welcome addition to the program and I am confident that he will be able to take over the reins and provide a smooth transition for the team that has enjoyed plenty of stability with Mick Maguire at the helm for the past 31 years.”

“I am honored to take over the swimming and diving program from Mick Maguire, who built such a strong tradition for Clarkson University,” Wahl said. “I hope to continue the great student-athlete experience while building the competitiveness of the program within the Liberty League conference.”

A 2014 graduate of Union College with degrees in both Geology and Biology, Wahl has spent time at three different institutions as an assistant coach, including Middlebury College (2014-15), Springfield College (2015-17), where he earned an MBA in May 2017, and at SUNY Geneseo (2017-18). Over the course of that short period of time, Wahl helped coach 22 student-athletes to qualify for the NCAA Championships, including 10 All-American honors. At Geneseo alone, 22 swimmers were SUNYAC Champions and 12 qualified for the NCAA Championships.