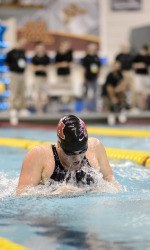 Kierra Smith was a double winner for the Minnesota women, who hold big leads over Purdue and Northwestern. Archive photo via Minnesota Athletics

The Boilermakers of Purdue, ranked #16, put together two* wins of their own. Rhiannon Sheets touched first in the 200 fly (2:00.27) over Gopher freshman Danielle Nack (2:00.67). Their other win came in the 1000 free, where Alexa Davis and Kaersten Meitz TIED with a time of 9:51.32. Ties are not uncommon in the sprint events, even less so in mid distance events, but it’s pretty unlikely for two swimmers to finish 40 lengths of the pool in the SAME TIME. So that’s why there’s that asterisk. We’re going to give both Davis and Meitz the recognition, while the points might be split.

The lone Wildcat win came in the 100 back, as Lacey Locke powered her way to a 55.45 to top Minnesota’s Simenec (55.76). Northwestern hasn’t been much of a force in the Big Ten in recent years, but they have a great group of underclassmen who are rapidly improving. The Wildcat women are coming off of a big win at then-#21 Iowa where they didn’t even have any diving points as their divers suffered from various illnesses/injuries (according to NUsports.com). They are on upset alert in the 200 free relay tomorrow.

The Northwestern men only took one individual event, and it was a close one. Almog Olshtein won the 50 free with a time of 20.37, stealing what would’ve been Minnesota’s Turner’s 2nd win. Turner, at 20.38, was only one hundredth behind Olshtein.

The second session of this meet begins tomorrow at noon CT.