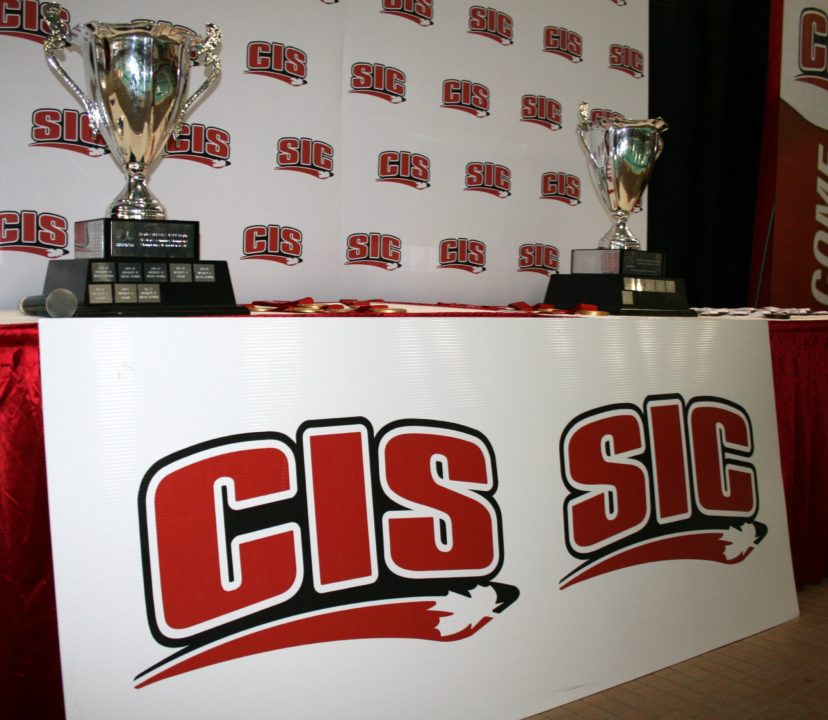 Tonight, in Calgary, Alberta, the UBC Thunderbirds will battle it out with the Toronto Varsity Blues for the men’s title.  Keep your mouse on the refresh button, all the info you need is to your right.  Thanks to Team Aquatic Supplies ( @TeamAquatic ) for making this meet coverage possible and to special SwimSwam guest writer Thom Brennan for manning the live updates!

The 800 was a two woman race from the start as UBC Thunderbird, CIS and Canadian Record Holder Savannah King and Université de Montréal’s Gabrielle Soucisse battled it out over the first 650 before King picked it up winning the event in a time of 8:33.72  (4:17/4:17). Soucisse finished in a 8:38.33, with the University of Toronto’s Bridget Coley finishing third in 8:44.47.

Calgary’s 5th year senior Jason Block continued his domination of the breaststroke events winning in a new CIS record  time (27.22), Brian Lee (University of Toronto) was second in 27.95, while Laval’s Kevin Deret was third in 28.10 Block was also awarded the Grand Slam Award, after winning the 50 Breast four times in his CIS career.

The University of Calgary Dinos continued their winning streak with Gleb Suvorov winning the men’s 200 back. His teammate Russell Wood took the race out fast, but Suvorov, the bronze medal winner from last year, charged over the second hundred to win in a time of 1:55.29, a new personal best. Matthew Myers from the Toronto Varsity Blues was second in 1:55.89; while Wood was third in 1:55.95. The two medals for the Dinos has tightened up the race for the men’s team title: Toronto still leads with 440 points, UBC T-Birds in second with 420, Calgary at 406.

Gabrielle Soucisse is having an outstanding meet. After winning the 100 and 200 Backs earlier in the meet and finishing second and pushing King in the 800 earlier in the night, Soucisse came back to win the 200 Back in 2:07.74, upsetting defending champion and CIS record holder Geneviève Cantin (Laval) who was second in 2:08.67. Taylor Moore from the University of Ottawa Gee Gees was third in 2:11.93.

Last year’s CIS Champion Dominique Massie-Martel (Laval) was able to repeat, winning the men’s 100 Free in 48.55, Kelly Aspinall (UBC) was second in 49.16 with Evan van Moerkerke (Guelph) in third in 49.28. UBC T-Bird freshman and Short Course World Championship team member Luke Peddie was sixth in 49.86. The Thunderbirds had a chance to take the lead in the men’s team race in the 100, with 2 up and 3 down, compared to UT’s 1 up and 1 down, and they took advantage. The T-Birds now lead with 461 points, to Toronto’s 455, Calgary is third in 437.

Caroline Lapierre-Lemire (UQTR) was out fast in 26.24 and held on for the win in 54.51. 2012 Olympian and CIS record holder Heather MacLean was second in 54.66, while her UBC teammate Brittney Harley was third in 55.36. Lapierre-Lemire was also awarded the Sprinters Cup after she won both the 50 and 100 Frees.

In the women’s race Calgary finished off its home meet with a win in the 400 medley relay with a time of 4:02.86. 100 Backstroke champ Gabrielle Soucisse had Université de Montréal out to an early lead (1:00.38), before Calgary a took lead they wouldn’t relinquish with Fiona Doyle on the breaststroke leg. Calgary’s Lindsey Delmar was able to hold off a charging UBC team, with 2012 Olympic teammates Amanda Reason (Calgary) and Heather MacLean (UBC) battled it out on the freestyle leg with Reason coming out on top. Final scores in the women’s team championship: UBC – 691.5, Calgary – 548, Toronto – 300.

In what has to be one of the closest men’s team points titles in CIS history it came down to the final relay. The race was a battle between UBC and Calgary. Kelly Aspinall (UBC), CIS Male Swimmer of the Year, was out first on the backstroke leg in 53.68, but Jason Block took command of the race on the breaststroke leg, out splitting everyone by over . Coleman Allen, the UNLV transfer, took the lead back on the fly, and Luke Peddie was able to hold on for the win, UBC won the race in 3:35.10. The University of Toronto placed fifth in the relay and scored enough points to hold off UBC and win the men’s CIS Championship. Final scores: Toronto – 539, UBC – 524, and Calgary – 514.