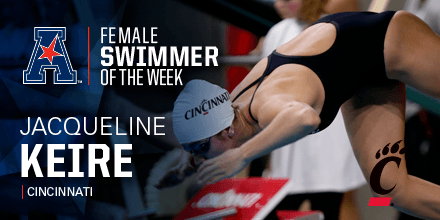 The American Athletic Conference has announced the winners of the league’s swimming and diving honors for the week ending Jan....

The American Athletic Conference has announced the winners of the league’s swimming and diving honors for the week ending Jan. 29.

AMERICAN ATHLETIC CONFERENCE MALE SWIMMER OF THE WEEK
Jonathan Gomez • Jr. • SMU • Cali, Columbia
Gomez produced three first-place finishes against Texas A&M last week. The native of Columbia finished the 400 individual medley in 3:52.34 and outswam the field in the 200 butterfly – both NCAA B standard times. He also touched the wall with the top time of 4:31.84 in the 500 freestyle.

AMERICAN ATHLETIC CONFERENCE MALE DIVER OF THE WEEK
Matt Mullen • Jr. • East Carolina • Harrisburg, Pa.
Mullen tallied a pair of top-3 performances at the South Carolina Collegiate Invitational. The junior placed second on the 3-meter board with a score of 275, and took third on the 1-meter board (256.25) for the Pirates.

AMERICAN ATHLETIC CONFERENCE FEMALE SWIMMER OF THE WEEK
Jacqueline Keire • Sr. • Cincinnati • Burlington, Ontario
Keire captured two individual events and contributed in two relay victories against Kentucky on Senior Day. The product of Burlington, Ontario, finished atop the podium in the 100 freestyle (50.52) and the 200 freestyle (1:50.56). Keire swam the anchor on the winning 200 medley relay team (3:46.41) and the 200 freestyle relay team (1:35.43).

AMERICAN ATHLETIC CONFERENCE FEMALE DIVER OF THE WEEK
Micaela Bouter • Jr. • Houston • Johannesburg, South Africa
Bouter earned first and third in the diving events at the LSU Quad Meet over the weekend. The junior produced her highest score of the season in the 3-meter, tallying a score of 335.50 to defeat the field. On the 1-meter board, Bouter took the bronze with a score of 265.35.

AROUND THE AMERICAN
A number of American Athletic Conference swimming and diving programs were named College Swimming and Diving Coaches Association of America (CSCAA) Scholar All-America Teams. Cincinnati and SMU men’s swimming and diving teams earned the honor, while Cincinnati, UConn, East Carolina, Houston, SMU, and Tulane were selected on the women’s side. The awards are in recognition of teams’ that achieved a grade point average of 3.0 or higher during the 2016 Fall Semester.

Cincinnati hosted Kentucky in its final dual meet of the season Friday at the Keating Aquatic Center. The Bearcats honored the careers of 11 seniors prior to the start of the match. The women’s team lost to the Wildcats by a score of 184-116, while the men fell 216-84.

UConn men’s and women’s swimming and diving captured its third consecutive dual meet victory against Dartmouth. The men defeated the Big Green, 181-114, while the women grabbed the 161-134 win.

SMU men’s swimming and diving team dropped a 133-95 decision to Texas A&M on Friday evening at the Mansfield ISD Natatorium. The women’s team fell to Texas A&M at the Student Recreation Center Natatorium on Friday afternoon in College Station.

The 2017 Men’s and Women’s Swimming and Diving Championships will take place February 15-18 at the University of Houston.