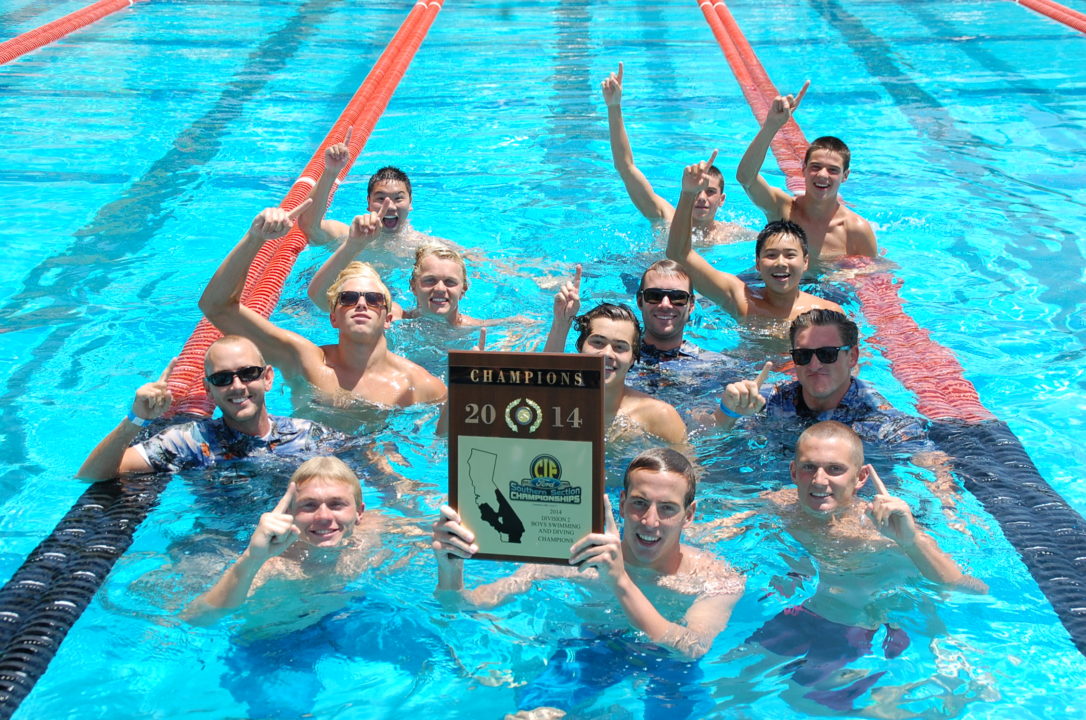 The Los Osos boys got their repeat, but the story of the CIF-SS D2 meet was the challenge put forth by Santiago of Corona. Santiago consistently got swimmers into scoring position, and even loaded up two events (50/100 free) with three “A” finalists each. The lead oscillated between the two schools until the 50 free. At that point Santiago went up and stayed there until the winner-takes-all 400 free relay.

Lakewood won the 200 medley relay thanks in no small part to a monster lead-off by junior Daniel McArthur (22.76). He was followed by juniors, Timothy Valdez (26.88) and Nick Bustamante (22.59), then sophomore Michael Talag brought them home (20.00) for a combined 1:34.23. With no graduating seniors on the relay, Lakewood has one more year to take a crack at the D2 record of 1:33.39. The race for second was exciting: Murrieta Valley got the win with a blistering freestyle anchor, giving them a 1:35.02 to 1:35.07 edge over Walnut.

Knowing he’d want to be way out front before the breaststrokers made their move, Lakewood’s McArthur got off to a quick start in the 200 IM. He split the fastest fly leg and by far the fastest back to go up by 1.6 seconds at the 100. Ayala sophmore Hunter Sa-Nguansap tried to close the gap but McArthur still had legs after the breast and was able to bring it home for the win, finishing in 1:47.86, .06 off the D2 record. Sa-Nguansap touched in 1:49.00 for second, while Walnut senior Derek Kao got third with 1:52.65.

For the second year in a row Coan of Los Osos followed up his 200 free with a victory in the 100 fly. This time he went a PB 48.63. Murrieta Valley junior Adrian Gutierrez finished second out of lane 8, and Crescenta Valley’s Edward Yi got third.

Wang from Rowland exacted revenge for his third-place finish in the 200 free by winning the 100 in 45.26. Los Osos’s Forbes led at the 50 but Wang outsplit him by a second on the back half and ended up first by .66. Senior Tyler Gamble of Arroyo Grande took third.

Another CIF-SS D2 record went down in the next event. Lakewood’s McArthur clocked a 48.48 in the 100 back which was good enough to lower the D2 mark by .32 and win the event by almost two seconds. Junior Dimitry Zhevelv of Santa Monica took second place while freshman Tenny Chong of Arcadia finished third.

Yale commit Kao of Walnut won the 100 breast with a new D2 record of 54.91. That bettered Zachary Stevens’s 2013 record by .22. The Arroyo Grande senior Stevens, who will swim at Cal next year with Coan and Ryan Kao, finished second in 55.35. MIT-bound Justin Chiu of Mark Keppel was third.

All in all it was a thrilling meet with lots of fast swims, and great team efforts all around. Runner-up Santiago didn’t win one event; none of their individual swimmers placed higher than third and the best their relay finish was second place. And yet they did a terrific job of getting kids into both “A” and “B” finals, outscoring the psych sheet by almost 90 points. Los Osos produced more finalists than expected too and in the end, every last one of them mattered. It couldn’t have been any closer or any more fun to watch.

Oh oh. Unlike other sections it looks like it’s not so full. Only the first hour.