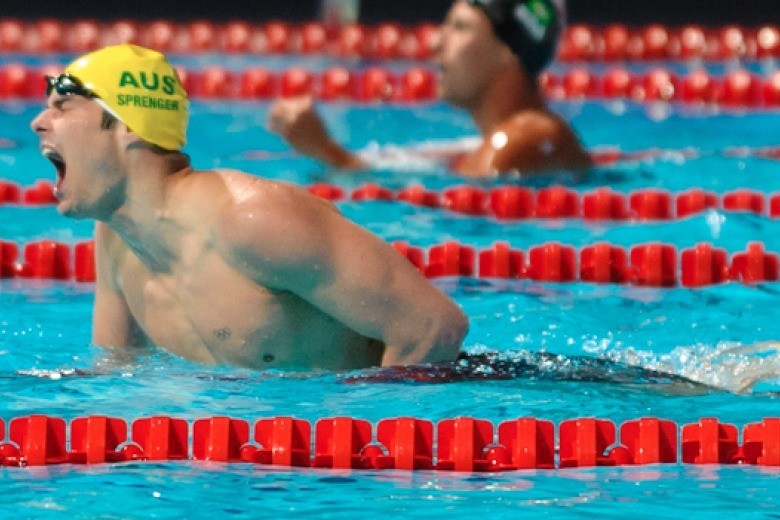 The two swimmers are on very different points of their career arcs.

Sprenger, at 28-years old, is likely headed toward his final Olympic Games,and is facing a shoulder injury that flared at the Commonwealth Games early in the 200. He would go on to finish competing at the meet, but didn’t come close to his favored status in the 100 breaststroke at that meet, or even to a medal. He did earn bronze in the 50 breaststroke and silver as part of the 400 medley relay.

“Obviously it’s frustrating to have an injury, but it is also part of being an athlete.  I’m disappointed at not being able to race here at home for the Pan Pacs, but if it had to happen, I’m glad it’s still two years out from Rio,” Sprenger said.

The Aussies already called up Jake Packard to the Pan Pacs team, and it will now be down to him and Kenneth To, based on fitness, to prop up the breaststroke leg of the Australian medley relay.

Fairweather, meanwhile, is just 17-years old and is beginning her journey to the top. She’ll miss the meet while dealing with an undisclosed illness.

Fairweather was a prelims swimmer on the women’s 800 free relay at the Commonwealth Games, where she split a 1:58.97 on the team’s top-seeded 3rd leg. The Australian women in finals would go on to win gold, with Fairweather winding up having a faster split than Alicia Coutts who replaced her in the evening.

Individually, Fairweather also took 6th in the 400 free (she was the #2 seed in prelims) as well.

“Remy is young and will no doubt come back firing next year and with a boost of confidence following her Commonwealth Games experience. We want to keep our athletes healthy leading into the Rio Olympic Games in 2016 and beyond, and this break is unfortunate but important for both swimmers,” said Swimming Australia head coach Jacco Verhaeren.

They’re the 2nd and 3rd swimmers to pull out of Pan Pacs, after Ellen Gandy previously dropped. The updated roster of 41 swimmers is below. The 2014 Pan Pac Championships run from August 21st-25th on the gold coast.

41 Australians for the Gold Coast

Glandular Fever seems to have wreaked havoc on many of the Australian female swimmers in the last few years. Campbell, Coutts, Seebohm, etc.

Usa will be down in the 800 free relay, but only this year and next in my opinion. Townley haas, rooney, dressel after Gregg troy makes him a 200 freestyler, will lead the relay in the olympics.

I am curious to see if Gregg Troy will be able to turn Dressel into a great 200 freestyler. I haven’t seen too many (if at all) a pure 50-100 sprinter turning great 200. On the opposite, there have been great swimmers successfully coming down the distance.

US will really need to step up the times on the trials.. to match australia on 800 free.. the top 3 australians are faster than the best american on 200 free..

If we assume Lochte and Phelps are not swimming in the 800 relay, I definitely think Australia has an edge, even though I suspect McLean and Dwyer will be faster. If they asked me, I’d say Phelps should NOT swim the 800 relay because, assuming he will be in the 100 free finals, I think it would take too much out of him the night before his fly swim. Maybe they could put him in the 400 free relay if he does well though.

If Lochte is planning to try to qualify for the 200 back on the World Team, I hope HE doesn’t swim the 400 free relay, because I don’t think he can handle that right now. Since… Read more »

Japan always displays technical excellence and will be competitive! Hopefully our breaststroker can keep us close enough that Adrian can touch the wall first though. The world rankings suggest we have both a breast and fly advantage over Australia (without Sprenger); I hope we will beat their medley relay, because I’m not at all confident our freestyle relays will prevail with the way the Aussies are swimming! It will be exciting!

Australia has not the level of butterfly Usa has ; so i don’t think they will challenge a Shields on fire / or Phelps on fire or Lochte on fire on the third leg ! Nathan is unbeatable on the last relay since 2012 . I don’t feel that’s gonna change . It will be exciting to follow

I didn’t realize the Australian Team is smaller than the US Team! I thought the max team size was part of the rules to make the competition as fair as possible. Well, I hope Sprenger wish Sprenger good luck in his recovery! This is probably good luck for our men’s medley relay though, because we do not currently have a breaststroker who can match the speed he has shown when he is healthy.

U are maybe right for the Us breaststroker in the medley relay but u maybe forgot one important thing for the medley : The japanese are more dangerous in every big meat at medley relays …. that said , with Grevers , Shields / Phelps , and Adrian , Nick Fink / Cody Miller , i don’t see Usa been beaten so far even with Sprenger on the team .

sorry it was Big Meet ! not big meat ! LOL

on backstroke , Usa has evident strong choices , for butterfly as well . they have choices other teams don’t have for the medley relay . That’s their power ……

With Grevers leading off, big meat was correct.

And I expect it will be Cordes on the MR. It’s the last event (but it comes right after the 200 breast, wtf?!) so it will depend how each swimmer looks on day 4.

On paper the US men’s strongest relay is the medley where they should be the favorites. Australia’s men though will have good chances to beat the US in both the 400 and 800 free relays. This is the most vulnerable the US men’s 4×200 has looked for a decade even though Dwyer and Lochte may be swimming on more rest.