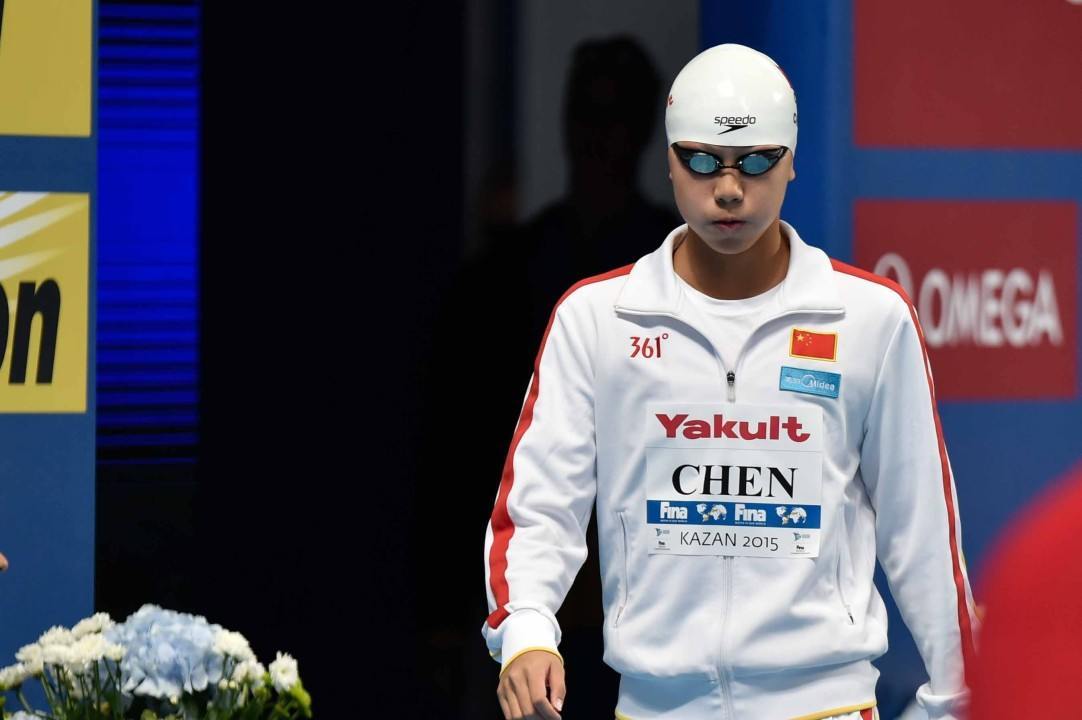 Chinese state run news agency Xinhua has published a confirmation from the Chinese Swimming Association that butterflier and Olympic finalist Chen Xinyi has tested positive for the banned substance hydrochlorothiazide, a diuretic.

If confirmed, this would be China’s first positive test at the Olympics since the 1992 Games in Barcelona.

Chen was the 8th qualifier into the 100 fly finals on the meet’s first day on Sunday, leaving American Kelsi Worrell 9th and out of the final. Chen then improved her time and touched in 56.72 to place .09 seconds behind American Dana Vollmer for a bronze medal.

Chen and the Chinese Swimming Association are seeking expedited testing of her “B” sample as well as an appeal hearing in front of the Court of Arbitration for Sport (CAS), which is set up in Rio to expedite such cases. The speed of those proceedings has been hindered by technology issues with the CAS website and email systems.

Under a new process by the IOC at the Olympics that they say will ensure transparency, the IOC will do initial research to decide if an adverse analytical finding was for a “legitimate reason.” Once the IOC has decided that there is a case, the CAS takes over to decide if an anti-doping violation has occurred.

The IOC then hands out any necessary punishments.

Hydrochlorothiazide is a diuretic, which means that it doesn’t provide any specific performance-enhancing benefits, but is outlawed because it can obscure other performance-enhancing substances. It’s prescribed use since the 1950s has been to treat high blood pressure and swelling due and is one of the most commonly-used blood pressure medications in the United States.

As of posting time, at 8:15 U.S. Eastern Time, Chen was still listed to swim in heat 12 of the women’s 50 free on Friday afternoon in Rio.

Wait…when was the test taken? Seems pretty quick turnaround (given testing times normally) to have this be a test taken post-100fly race. This almost has to be a positive from prior to Rio. Did China know about this prior to Rio and waited till now to release the info?

Yep it was indeed prior to Rio, not sure if they knew it though.

Not like it matters. Just abuse the appeal process and stuff their pockets with cash. Serve a 1 week suspension. Come back and act like you were the victim of an evil gnc rep. Hire Efimova as a consultant. Shes a pro at this sort of thing.

The most surprising thing in this article is that this is the first violation since 1992. That’s pretty impressive.

Hydrochlorothiazide is a relatively weak diuretic. Although it’s the most common “masking agent” WADA finds, it’s still hard to imagine it obscures much in the way of PEDs beyond what drinking a lot of water to dilute the urine would do. If anything, it has performance impairing effects, unless you’re trying to drop weight for a wrestling match to make a weight cutoff.

First positive test AT THE OLYMPICS since 1992.

I realize that. It’s worth pointing out though, that going back to 1968 for the summer Olympics for all sports, China has only been caught doping 3 times. The U.S.? 18 times. I don’t think we exactly have a legacy to be proud of.

Look. I’ll give you one name — an American — that trumps them all, and anything anyone has ever done individually in doping. Lance Armstrong. Sponsored by the United States Postal Service no less. This holier than thou attitude we Americans have when it comes to doping is ridiculous.

Yes dopers come from many countries but that is beside the point. The real scandal is state/NGO complicity or failure to take swift and appropriate action. USA Track and Field….guilty. USA Swimming….not guilty. Chinese Swimming Federation…guilty. MLB guilty. I repeat the Chinese (Swimming Federation) are guilty of mishandling the Sun doping violation (failure to report in a timely manner, etc). If we want to control doping then we need to take action against the offending federations. ALL Chinese swimmers should have been banned from the Olympic just like the Russian track and field athletes. That will light a fire for all federations to be more diligent.

Armstrong doped on his own. Russian, Chinese and then East Germany have a state sponsored doping program.

So many more athletes swim in the United States swim. It’s a higher probability for people to dope. Not saying we support it in fact we ridicule our athletes who do. China stays acting like they’re innocent along with Russia.

They had something like 8 at 94 Asian Games. HGH in their luggage at 98 Worlds.

Wow. Poor Kelsi. No opportunity for a finals swim bc of this.

Can’t say Im surprised. I am surprised there havent been more positive tests.

Heartbroken for kelsi if this is true!

I’m sure Kelsi would be the first to say it was her terrible finish that cost her the finals spot.

The Chinese women doping has been an overhang in the sport for decades. I read earlier today that close to half of the positive tests in women’s swimming in the 1990s were Chinese swimmers. Even more disturbing, in this instance the swimmer tested positive for a masking agent drug. Russia gets the ink but China has been an equal offender in the sport of swimming & in… Read more »

I can imagine a lot of things. And yes, her finish was relevant to her not getting to the finals. When you underperform by half a second in a hundred, you leave room for all kinds of things to happen. Just ask Cate Campbell.

What I didn’t imagine, as an American, was that some of our greatest sports heroes —- Lance Armstrong, Marion Jones, Mark McGuire, to name very, very few — were cheats. Hell, one of our own government agencies — the United States Postal Service — sponsored one of them. Are we cleaner in swimming? Probably so. But Lance Armstrong’s decade of repeated denials and negative tests, leave some room for doubt, and should put a lid on… Read more »

The USPS didn’t sponsor one of them, it sponsored a whole team of them.

The cheating seems widespread. Look at the Chinese gymnasts. Yet another Olympics where the female Chinese athletes look like they are 12 and not the required minimum 16 years old. It’s much easier for them to whip around the uneven parallel bars when they weigh 80 lbs and have only lean muscle and haven’t gone through puberty. It makes me appreciate the accomplishments of the American women’s team even more. They are incredible athletes and are doing so with real bodies, they have spent years on the gym in a demanding sport.

@Swim mom
I don’t think you are being objective and fair in your comments about the relative phisiques between the Chinese and the American lady gymnasts. One simply can’t relate the real age to the looks of the same people, some more the looks of different ethnicities !

Why not then the US train up a team of purely petite Asian gymnasts and compete with the Chinese? Anyway, USA is not short of such talents !