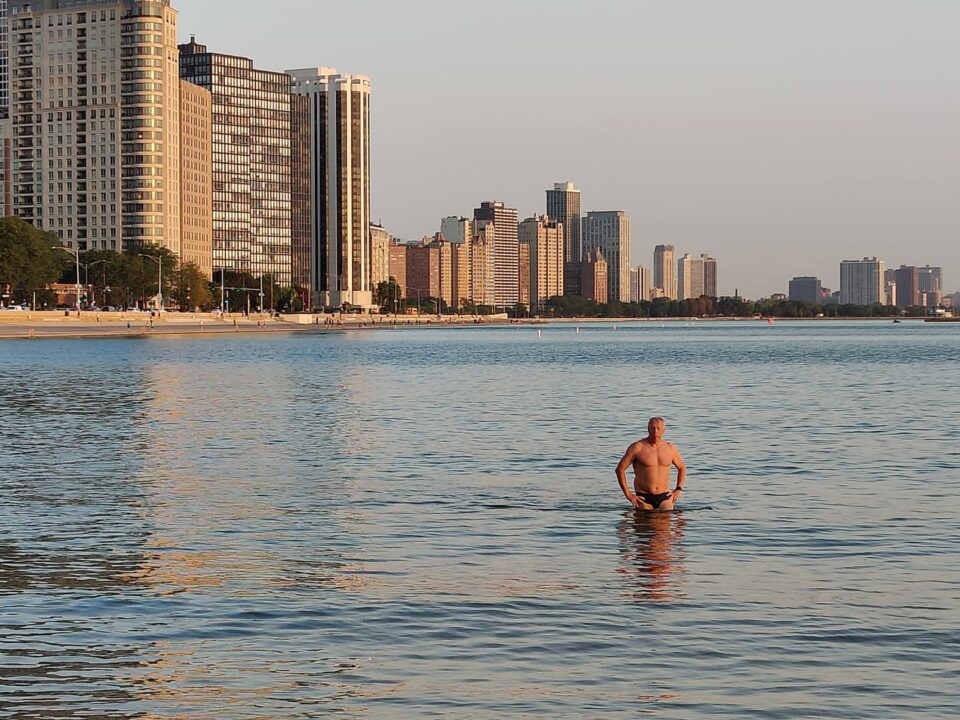 George Wendt was a legend in the Chicago swimming scene. He died after suffering a heart attack during the Big Shoulders Swim in Lake Michigan on Saturday. Current photo via Eric Johnson

George F Wendt, a champion Masters swimmer, died after suffering a heart attack during the Big Shoulders Swim in Chicago on Saturday. He was 73 years old.

Wendt is a local swimming legend in Chicago and was the president of the Chicago Masters Swim Club.

No details have been formally released, but there were images of Wendt going through the starting gate. Ambulances could be seen driving down the lake shore running trail while the participants were swimming. By the time the 5 kilometer race was finished, the emergency personnel were all gone. Multiple participants have posted on social media that the heart attack occured “during the swim.”

According to an article in the Chicago Tribune in 2012, Wendt at the time had competed in all 22 Big Shoulders races, and twice won.

Wendt set at least one Masters World Record in his career, in the 400 IM in the 65-69 age group in 2012, though that record has since been broken. He also broke 7 US Masters Swimming World Records in his career.

A statement by swim organizers read as follows:

I write this with an incredibly heavy heart. For those who haven’t heard, today we lost George Wendt, a good friend, a role model, a swimming icon, and someone I will miss dearly. George was one of the best people I had the pleasure to call friend.  Always positive with a smile, George was the guy who made going to the pool at 5:15 seem like a privilege, rather than a chore.  He died doing something he loved, open water swimming.  We will have more in the days ahead, but in the meantime, please send any photos you had of George from the race, or from the race in general, to post.

Several other tributes to Wendt poured out on social media over the weekend, and a sunrise vigil was held in his memory at Promontory Point in Chicago on Sunday morning.

The swimming community lost a great man yesterday. George Wendt held many individual lifetime records and was a…

The Big Shoulders swim includes a 5 kilometer and 2.5 kilometer race, departing from the Ohio Street Beach on Lake Michigan. In the 5km race, the main event, Tyler Hines won in 1 hour, 8 minutes, 45 seconds. The 2nd-place finisher, and top female finisher, was Danielle Schumacher in a time of 1 hour, 9 minutes, and 11 seconds. Hines is a former swimmer at the University of Wisconsin, while Schumacher is a former collegiate swimmer at Illinois State.

Among the more recognizable names in the field was current Northwestern sophomore Lola Mull, who placed 6th overall. Mull was the 8th place finisher at the 2021 NCAA Championship

George and I swam together many years ago in Hawaii when his daughter was on the University of Minnesota team. We also crossed paths a few times at masters nationals. In 2008 he beat me at nationals and broke my national record in the 400. I had hoped to see him again at one of these meets and will miss his competitive spirit and welcoming attitude. My best to his family.

I had the pleasure of seeing George on deck at UIC almost everyday when I was coaching with CWAC from 2007-2011. He was a wonderful man and an amazing supporter of the swimming community. He will be dearly missed. 🙏🏻

I was lucky enough to get to know George well in my time with Chicago Masters. He was the first person to introduce himself to me on my first day, and he was always ready with a smile on deck. It’s hard to describe the presence he had; overwhelmingly positive and infectious. He was such a kind and generous man, I’m so sorry to hear of this loss.

Had the pleasure of swimming with George in the late 90s… hard worker, great guy, real gentleman. Heart and soul of masters and open water swimming in Chicago… will be missed.

I was at this race. It is unfortunate I never had the opportunity to talk to George. From personal accounts it seems like he was well liked.

Pretty sad to be at a race with someone passing away. Life is too short.

George was the coolest guy. So unassuming. And just a great swimmer.
I went to Fenwick HS and knew the Wendt brothers there. I knew George fairly well and am so shocked and saddened.

What a loss for the swimming community and George’s family and friends. RIP George. In heaven it’s all glassy open water, perfect water temp, gorgeous nature and immunity to getting tired, sunburned, or ever going off course. And when you walk up a smooth beach exciting the water, your favorite food and beverage await you. You are in a better place my friend. You will be missed.

When you are older the heart beat can be off. I had A Fib which can caused a stroke, so I have a monitoring device near my heart to make certain A fib doesn’t return.. Not certain if it was an irregular heart beat that caused George’s heart attack.

I probably owe George my swimming and coaching career. I knew George at the University of Minnesota, where I joined the team the year after he retired from college competition. After my freshman year, after summer swimming, I was tired, and started talking (to anyone who would listen), about quitting. One day, I sat down with George, and instead of talking about “quitting,” we talked about “swimming.” That conversation made me look at the positives, and I never looked back.

The next season, I had the honor of breaking George’s varsity record in the 400 IM. I finished my career with the Golden Gophers in 1972, and went on to coach for 43 years.