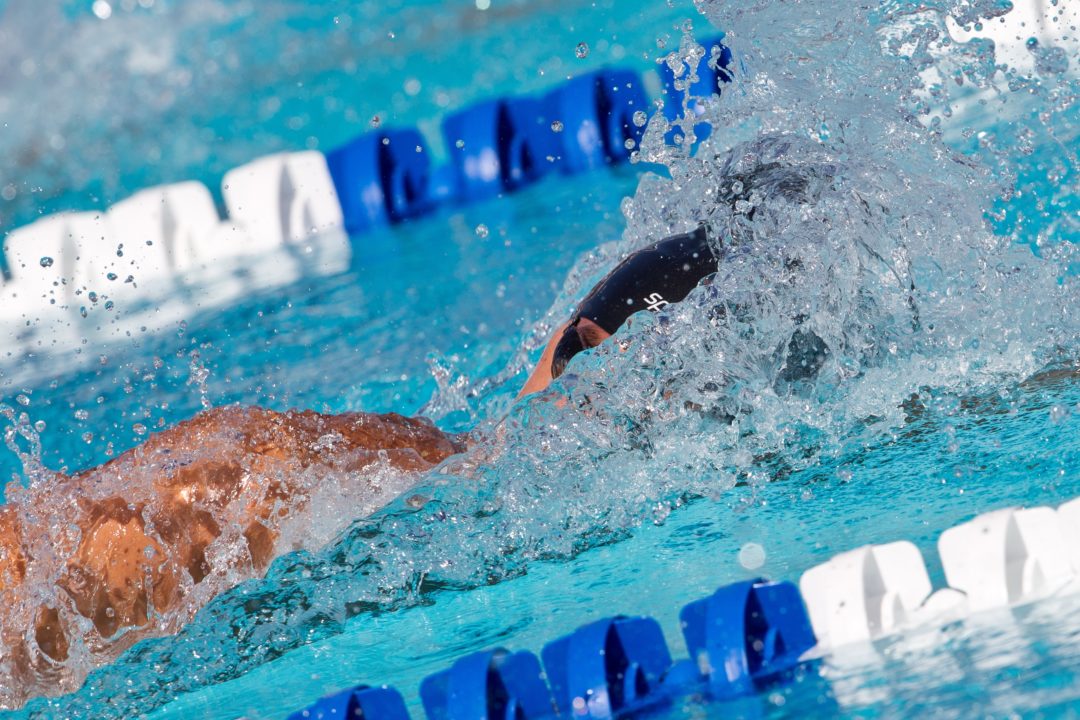 Day 4 of the 2012 Australian Age Group Championships, swum in long course, got off to a bit of a...

Day 4 of the 2012 Australian Age Group Championships, swum in long course, got off to a bit of a slow start Thursday.

But then the big-stars showed up in the day’s last 4 events, and turned that momentum around completely.

It started in the girls’ 100 free, where a pair of teammates from Chandler in Queensland, with 13-year old Shayna Jack took a win in 56.47, which is the best time we’ve seen by an Australian at this age since Yolane Kukla in 2009 was swimming 55’s. Jack’s teammate Lucia Lassman took 2nd in 57.91.

Shortly thereafter in the boys’ 12-13 100 freestyle, the newest swimming sensation Kyle Chalmers  took yet another win, and yet another Australian National Age Group Record, with a stunning, better-check-the-backup-watches time of 52.29 to take a dominant win.

That time is really pretty historic. It breaks Maxwell Te Haumi’s 53.63 set 5 years ago, and comes within a tenth of clearing the 14-year olds record. Chalmers was already approaching the record with his swim from January’s South Australia State Championship meet, but I didn’t see him crushing this record by well over a second. That’s easily his best swim of the meet, and his 3rd National Age Record.

By comparison, the fastest 13-year old that we’ve seen in the US (by my recollection and research) is Charlie Moore…in 54.3.

Chalmers is also a strong Aussie rules football player, following in the footsteps of his father Brett Chalmers, a former pro.

“Footy training at the moment is only a couple of times a week, but I’m supposed to be playing in a rep (representative) team later this year, but I don’t think I’m going to do it because I just don’t have time… If I keep on track with these records my choice will be way easier and this success in swimming will help me out a lot when it comes time to choose,” Chalmers said of deciding between his two sporting loves.

Though that was the only record broken on the night, the swimming stayed hot for the final event – the 14;-year old’s 100 breaststroke. In the girls’ race, Georgia Bohl from the famed club at St. Peter’s (where she would train alongside Leisel Jones). That came close to Jones’ National Age Record in that event that sits at 1:08.30. It’s probable that Lethal Leisel will retire after London (though – can you ever be sure anymore?), but Bohl is in line to be more-than-ready to step in and challenge by 2016 – under the watch of her father Michael Bohl, the head coach at St. Peter’s and one of the world’s great coaches.

In the boys’ version, Nicholas Groenewald took his 3rd title of the night with a 1:08.00 in the boys’ 14-year olds 100 breaststrokes. That’s nowhere near a record, however it’s a trend back in the right direction for Australian men’s breaststroking, that is a bit thin in the older age groups (including the senior level). The top 5 finishers, including Josh Zuill in 2nd in 1:08.36, were faster than the winning time in this event from last year.

The boys’ 16-year olds 200 freestyle may have exposed a more immediate star for the Aussies – 16-year old Graham Alexander in a blazing 1:49.84. That’s 1.01 seconds faster than Cameron McEvoy won this race in last season, and McEvoy is now on the Olympic Team at 17. What really stood out in that race was how well he was able to hold his speed – after opening in 53.6, he was able to close in a 56.2, which is really fast for that age. The front-half still needs some work, but by 2013 or 2015, depending on retirements, he too could join the Aussie free relay at the World Championships.

In the elder age groups, Olympic Team member Brittany Elmslie won the 17-18 100 fly in 1:00.04. That’s slower than she was at long course Nationals, but again shows the difference between a “rested” swimmer and one who is back in big training. She went out very hard, and though Mikkayla Sheridan closed much better on the closing 50 meters, Elmslie held on to top Sheridan’s 1:04.44.

In the girls’ 17-18 200 IM, 17-year old Kotuku Ngawati topped Taylor McKeown with a 2:13.50, which by nearly two seconds clears her lifetime best. Ngawati didn’t have a great senior Nationals meet, but it seems as though maybe she’s saved her energy for this race instead.

And the other highlight time came in the girls’ 800 free relay. The Wests Illawara team was sitting about 5th at the halfway mark, nearly 6-seconds behind the front-loaded (and impressive) Southport Olympic Team. But then Emma McKeon hit the water, and swam a 1:57.94 split to launch them into a huge lead. Zoe Elkerton had enough to hold on for the win for Wests Illawara in 8:16.60.

Yeah, well, that Chalmers kid is no Michael Andrew… 😉

….I think there should be an age group world championships. Could be very difficult on parents–time, energy, expenses–but building excitement at the age group level is important. We focus so much on elite swimmers, but the age group base is 99.9% of the swimming community.