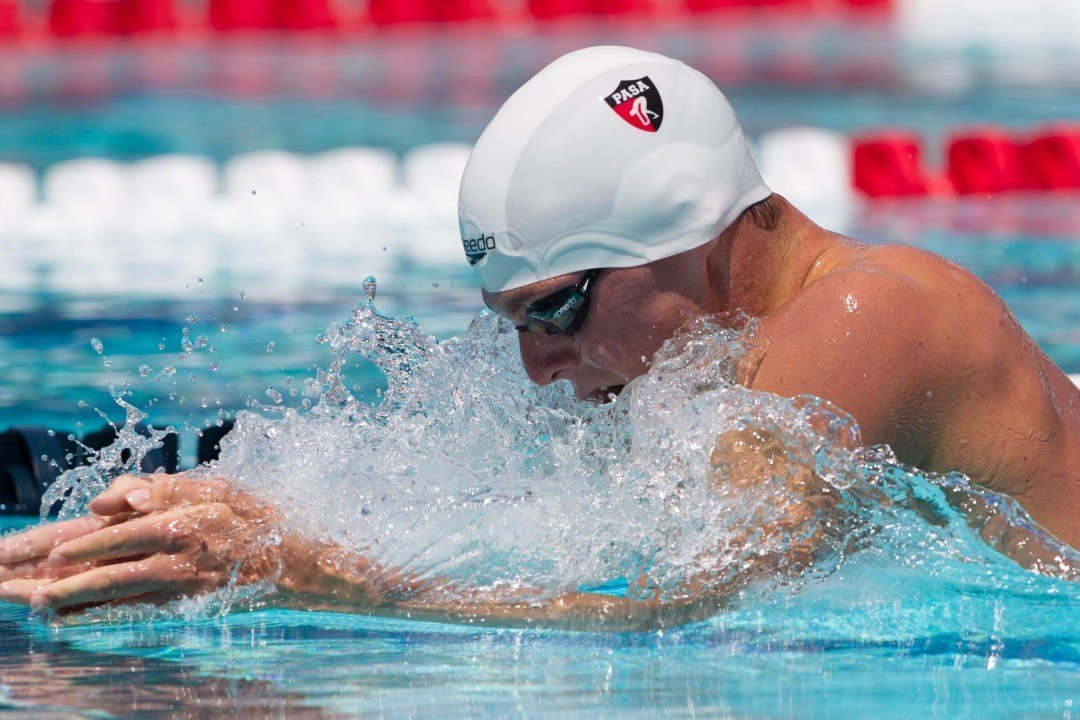 Curtis Ogren leads the Palo Alto boys, who sit atop the boys team points. PASA is second in combined scores to Carmel which has gotten 218 from its outstanding girls crew. Current photo via Tim Binning/TheSwimPictures.com

The team scores for each gender haven’t been terribly close so far at US Junior Nationals, with the girls from Carmel, Indiana and the Palo Alto Stanford boys leading handily. But the two programs are separated by just 8 points in the combined totals heading into the last day of competition.

The Carmel girls have been lighting it up so far, led by budding star Amy Bilquist‘s double wins and the record-smashing 4×100 free relay. In fact, Carmel even went 1-2 in the 100 back last night with Bilquist and Claire Adams, both 16, sweeping the top two spots.

They now lead the team points by 96 over Y-Spartaquatics, sitting at 218 points for the week. That’ll be a tough margin for anyone to overcome today, especially with Bilquist lining up her third win of Juniors in the 50 free, an event in which Veronica Burchill is also expected to score and three more Carmel girls could wind up cracking the scoring heats with good swims.

Meanwhile Palo Alto Stanford Aquatics (PASA) lead the boys scores by a narrower, but still dominating margin. Their 126 points are 32 ahead of the next-closest challengers, with Indiana University, Aquazot, SwimAtlanta, Nova, Tennessee and Upper Dublin all locked in a tight battle for second (all six of those teams are within 5 points of one another currently). PASA is also set up for a potential win tonight, with IM stud and future Stanford Cardinal freshman Curtis Ogren holding the top seed in the 200 IM. He’s especially favored in that event given Aquazot’s Corey Okubo has scratched the race. Okubo, an incoming Princeton freshman, was slated to be Ogren’s biggest competition, but scratched out of the remainder of his lineup after winning the 200 fly and taking 5th in the 200 back, presumably to rest up for Senior Nationals next week. Okubo has only been swimming relays since then.

But Carmel and PASA are nearly dead even in the combined scores. Carmel leads with 218, all of those points coming from its girls. PASA, meanwhile, has gotten 84 points on the girls side, led by rising Stanford freshman Ally Howe. In the combined total, they sit at 210. Those two are well checked out from the rest of the list, as North Baltimore sits third back at 134.

Keep an eye on that points battle tonight, as things could come right down to the 400 medley relays to decide the overall points winners.

Don’t you have to score at least one point in each sex to compete in the combined. At least it used to be that way.

That’s what I thought as well.