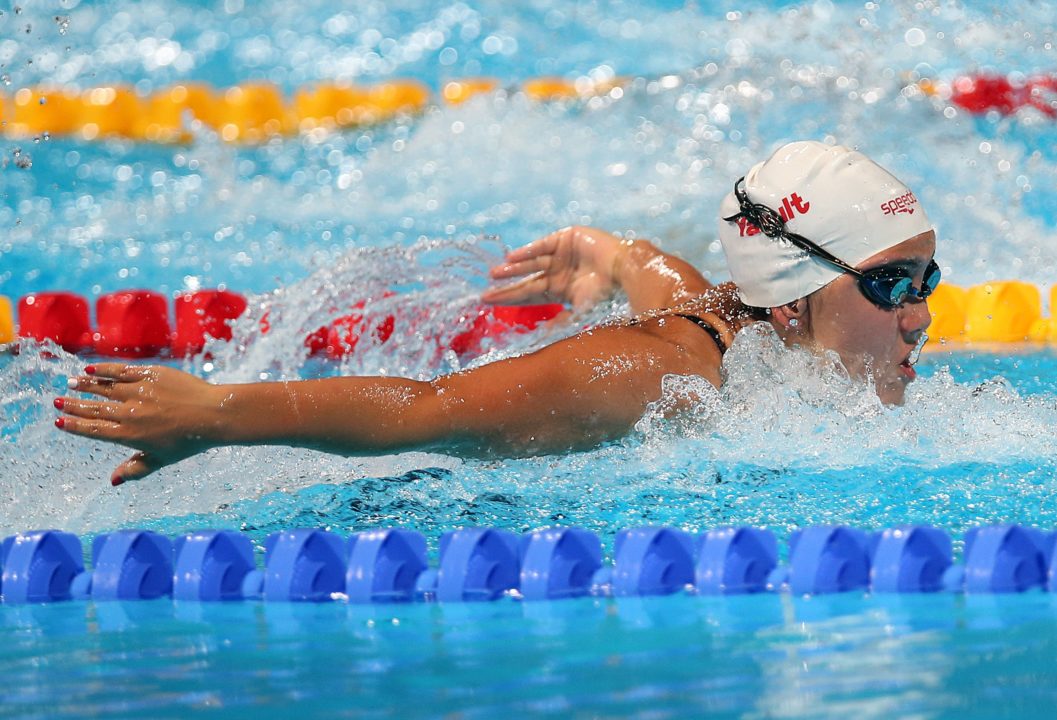 “I’ve always liked training with people that are faster than me,” Thomas said. “They’ll push me every day, and that’s the way to get better.” Current photo via Swimming Canada/Ian MacNicol

Cal recently got a big verbal commitment from one of the top recruit’s in the class of 2014: Canadian Noemie Thomas. Thomas recently came back from her first major long course international competition; finishing seventh in the 100 fly finals at the World Championships in Barcelona.

Thomas will be joining the likes of some of the top swimmers in the world in joining Cal’s impressive women’s roster for next year. The team holds two 2012 U.S. Olympians, Missy Franklin and Rachel Bootsma, along with two international Olympians, Farida Osman from Egypt and Marina Garcia from Spain.

“I’ve always liked training with people that are faster than me,” Thomas said. “They’ll push me every day, and that’s the way to get better.” Nobody in the NCAA right now comes within half a second of Thomas’ 100 fly long course time of 57.96, so Thomas could very well be the one doing some of the pushing as well.

Thomas faced a tough decision, having to decide between going to an American school or staying and training in Canada at the International Centre with some of Canada’s top athletes.

“The main thing was being part of an American team and obviously training with one of the best colleges in the US as well as training with Teri (McKeever) and all the high level swimmers there. They understand that I want to develop not just as a college athlete, but also as an international athlete,” Thomas said.

Thomas added that the training program at Cal worked well with her goals, “They have a strong emphasis on swimming well in the summer time and that’s something that’s really important to me.”

A very important factor in her decision was the coaching staff at Cal, “I’m very confident that Teri will do what’s best for every person on the team.”

One thing that Thomas is going to have to get used to is short-course-yards competition. In Canada, short course meets are done in short course meters (25) so Thomas is lacking in yards experience. Her short course swimming is very quick which indicates that she might be just as good in yards. At the 2012 Short Course FINA Worlds, Thomas finished fourth in both the 50 and 100 fly in 25.60 and 56.92.

At the 2012 Short Course FINA Worlds, Thomas beat her teammate and rival Katerine Savard however, Savard got the better of her in Barcelona finishing fifth in the 100 fly. Savard broke the Canadian record in the prelims, touching the wall in 57.31.

Savard not only swims the 100 fly, but swims the 200 as well. Savard finished 15th in the 200 fly in Barcelona. Thomas might be looking to expand her practice into Savard’s territory, putting a little more focus on the 200 fly.

“I’ve always been more of a sprint butterflyer than a 200 butterflyer, but lately I’ve been trying to do both.”

The next time these two will face off at an international meet will be at the 2014 Pan Pacs in Gold Coast, Australia assuming both qualify at the Canadian trials.

Thomas had a slower start to this season, taking time off after worlds and resuming her training in September. Recruitment trips and writing her SAT’s have also taken time away from her training.

“From now on until trials, I just need to train as much as I can to make the team,” Thomas said.

Right now Thomas is spending her senior year in high school training in Canada. She plans to enjoy every last minute of it, “The difference will be appreciating everything a little bit more because I know that it’s my last year in Canada. I’ll only be seeing my teammates for one more year and I’m so grateful for everything I have right now including being with my family and brother at home.”

Thomas has only just begun her international career here and looks to broaden her success next year training under Teri McKeever at Cal.

Smash, Cal… As good a job as Stanford has done, Cal just keeps piling up A+ recruits. This girl may have been the #1, and certainly a top 3 US recruit. Yet it feels like it’s sneaking in under the radar.

Cal may leave scorers home for the 2015 NCAA champs. I don’t think that’s a wild statement. There is SO much world class talent on that pool already… And they are adding more and more. It’s amazing.

Exactly… In the 200 Medley, it’s entirely possible that only Missy makes it… As the Freestyler… And who knows if Missy can really out sprint a kid like Vredeveld in a 50… Imagine not using ANY of those three? Crazy… I could see it though… I think Missy is a lock on the 400, clearly, but neither Pelton or Bootsma are. (This is all 2015 talk).