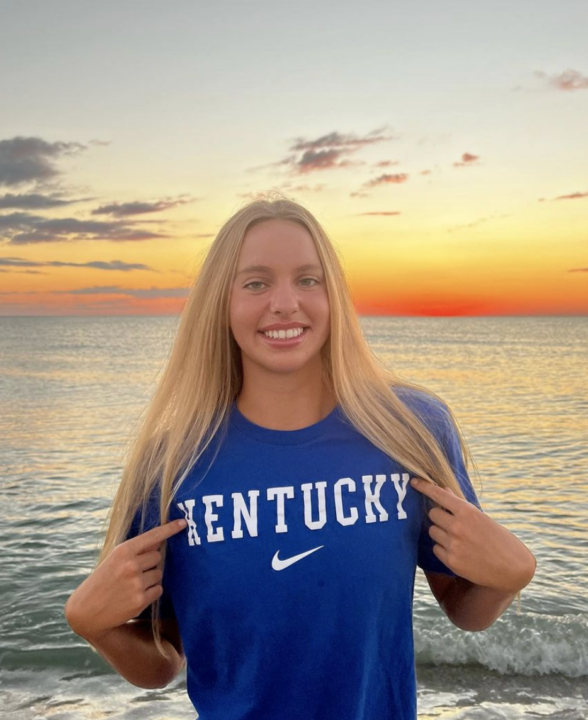 Distance specialist and Canadian Bailey O'Regan has announced her verbal commitment to the Kentucky Wildcats for the fall of 2024. Current photo via Instagram

Kentucky is continuing to lead the way for the class of 2024 commitments, with the most recent being Bailey O’Regan. She announced her verbal commitment on Instagram:

O’Regan is Canadian, and has competed for Etobicoke Swimming out of Ontario in the past. However, in February she made the move to the Sarasota Sharks in Florida to train under Brent Arckey, after previously spending time there during COVID. The Sarasota Sharks have a history of being a strong distance program, as they have developed elite swimmers like Olympian Emma Weyant. Fellow Canadian and Etobicoke alumni Summer McIntosh has also made stops in Sarasota to train.

O’Regan is a mid-distance to distance specialist, with range from the 200 free up to the 1500, including the 400 IM. She has not competed in short course recently, but had a busy spring and summer competing in the Canada Games, Futures out of Cary, and the Canadian Swimming Trials.

Distance freestyle was a relatively weak event for the Wildcats in 2022, as their highest finisher at SEC’s last year was current junior Megan Drumm, who placed 5th in the 1650 with a time of 16:11.14. Their next best scorer in the event was current senior Beth McNeese, who tied for 17th with a time of 16:21.93. In the 500, Kentucky missed out on advancing anyone to the A-final, but did have Izzy Gati, Kaylee Williams, and Beth McNeese advance in the B or C-final.

O’Regan still has two years to improve and possibly get some short course experience before arriving in Lexington, but she already will add some much needed depth to the Kentucky distance group. Kentucky has the #15 ranked 2022 recruiting class, however of this group, only Stella Todd comes in as distance specialist.

In the class of 2023, Elizabeth Tilt has a similar time to O’Regan in the 400 IM (4:50.22). Libby Grether and Paige Houseman also are distance free specialists, but have best times that are currently slower than O’Regan’s.

O’Regan joins fellow Canadian Emma Finlin, Hayden Penny, Addison Reese, and Taylor Grimley in Kentucky’s rapidly growing class of 2028. There are also two more in this class according to Kentucky’s social media, but the names have not yet been confirmed.

The class thus far is very strong in IM and distance specifically, but all the recruits are versatile and have the potential to make an impact in multiple events. Finlin is also a distance specialist, who is coming off a sixth-place finish in both the 800 and 1500 at the Junior Pan Pacs held in August. Reese and Penny were featured in the “Best of The Rest” section in SwimSwam’s “Way Too Early” recruit ranks for the class of 2024, and already hold best times that are projected to score at SECs.

Great choice for Bailey! We will see
some big things from her under coach Lars