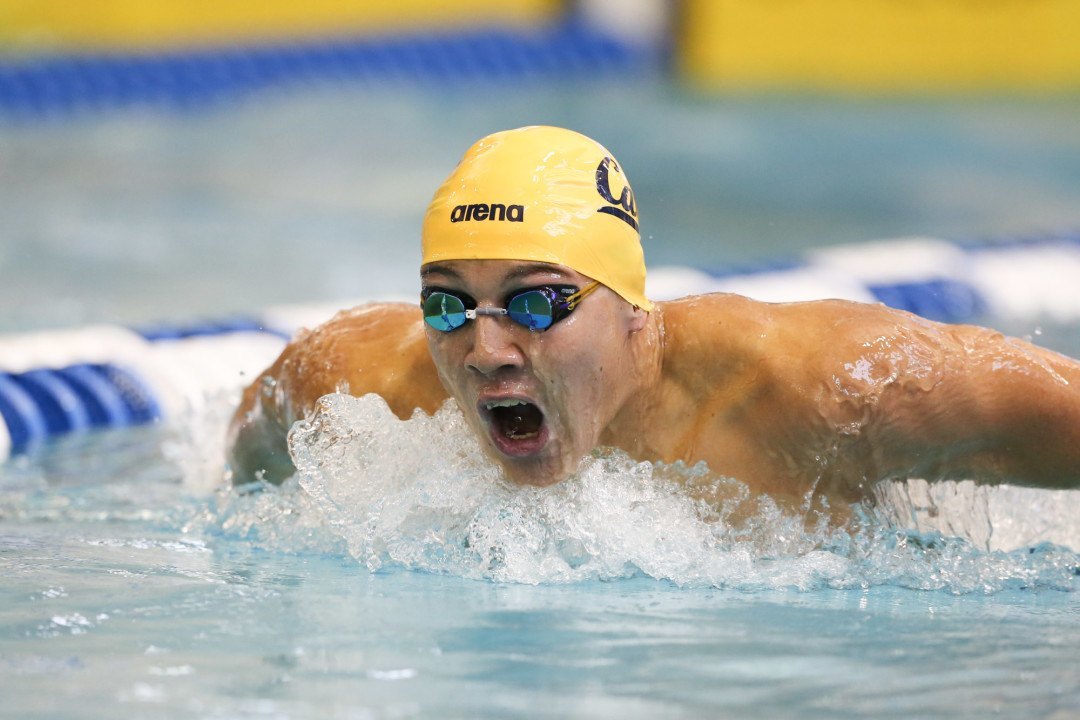 Cal’s Long Gutierrez has entered in the 50 free, 200 free, and 100 free for NCAAs, a schedule fairly different from his lineup last year.

Last year, Gutierrez pulled off an incredibly tough prelims double on Day 3 of the 2016 NCAA Championships, swimming the 200 free and the 100 fly back to back. While doubling up at NCAAs is no easy task, the commonly attempted double is the 100 fly – 100 back double, as there are two events in between. The 200 free – 100 fly double, meanwhile, is far rarer, but Gutierrez was able to qualify for the B final in both events. He was 1:33.93 in the 200 free just minutes after cracking a 45.99 in the 100 fly, finishing 13th in the fly and 14th in the free.

As impressive as his prelims session was, Gutierrez scratched the 100 fly finals swim and focused on the 200 free, where he shaved off a few tenths to grab 12th (1:33.55). In a huge swing for Cal, Justin Lynch, who had tied for 17th in the 100 fly prelims, won the swim-off, and then got bumped into the B final thanks to Gutierrez’s scratch. Lynch then moved up to 10th in the final, nearly winning it. Gutierrez also swam the 200 fly for his third event, but was unable to make finals.

One reason why he’s only swimming freestyle, besides avoiding the tough double on Day 3, would be due to Cal’s depth in butterfly. In the 100 fly, Cal has the 8th seed (Matthew Josa) and 9th seed (Justin Lynch), while they have the 2nd (Zheng Quah), 4th (Andrew Seliskar) and 12th (Mike Thomas) seeds in the 200 fly.

Cal is so stacked in fly

This is off topic, but I wonder why top notch schools aren’t usually greatest at breastroke. It’s more obvious with the women (Cal, Stanford), but it does seem like it’s a problem with the boys too. I would think that any top breastroker would love to come to Stanford, Cal, or any of the other top school.

Huh? Ever heard of Licon, Katis, and Hoppe?

Katis went to Harvard first and Licon is an IMer in addition to being a breaststroker, just deciding to swim 100 breast for the first time at NCAAs this year. Hoppe is not at the elite level at this point ranked 16th in the 100 and 45th in the 200 this year. He has yet to make an A final at NCAAs. If you look at the top 5 teams, they have 2 swimmers in the top 16 of the 200 breast while they have 5 in the 200 back and 8 in the 200 fly. SWIMGEEKGIRL’s observation is correct.

It’s sort of correct within the narrow confines of your definition for the past 2 years or so. Not enough to make any sort of definitive meaningful statement.

I may be completely wrong but I think it’s because breaststrokers aren’t as helpful on relays, except the medley relays. It seems to me that backstrokers/butterflyers are decent at free as well, especially butterflyers. This is probably because breaststroke is just so different from any other stroke.
Take Schooling, for example. He can be used effectively in 100/200 fly, 50/100/maybe 200 free, and all five relays. On the other hand, Licon could be used effectively in 100/200 breast, 200/400 IM, and only two relays. This means top programs would ideally develop or recruit only one or two breaststrokers.

I know this is an extremely narrow range but when I was saying top tier I was thinking more about powerhouses Cal + Texas for guys and Cal + Stanford + Georgia for girls.

On a side note, I know the powerhouses probably changed over time but my limited experience is from the past couple years maximum so that’s what I think.

I apologize if anybody was offended by that. I didn’t mean anything offensive by that, it is just a casual observation that I, as a casual swim fan who has really only been following swimming for the past couple years, had thought I noticed.

My reasoning behind it was that Lilly King and Miller were from Indiana while Cordes was from Arizona (I think). I also think of Prenot and Licon as more IMers (I know Prenot got silver at Rio in breast but to me I think of him as more a IMer). Also commentators are always commentating that Cal has no breastroker and has to use Weirzeil as the breastroker on medley relays.

I apologize if I offended anybody with my statement. I’ll try to be more clear with what I’m saying. It was just something I thought I noticed as a casual swim fan. But I will admit, that I have only been following swimming for the past couple years so my history is not that great. I said this before, but I know this is an extremely narrow range but when I was saying top tier I was thinking more about powerhouses Cal + Texas for guys. Obviously it was different before, but that is what I in my limited experience think. I was looking at the U.S.A 2016 Olympic Trials for the 100 and 200 of each stroke and saw… Read more »

Dwyer was from Florida