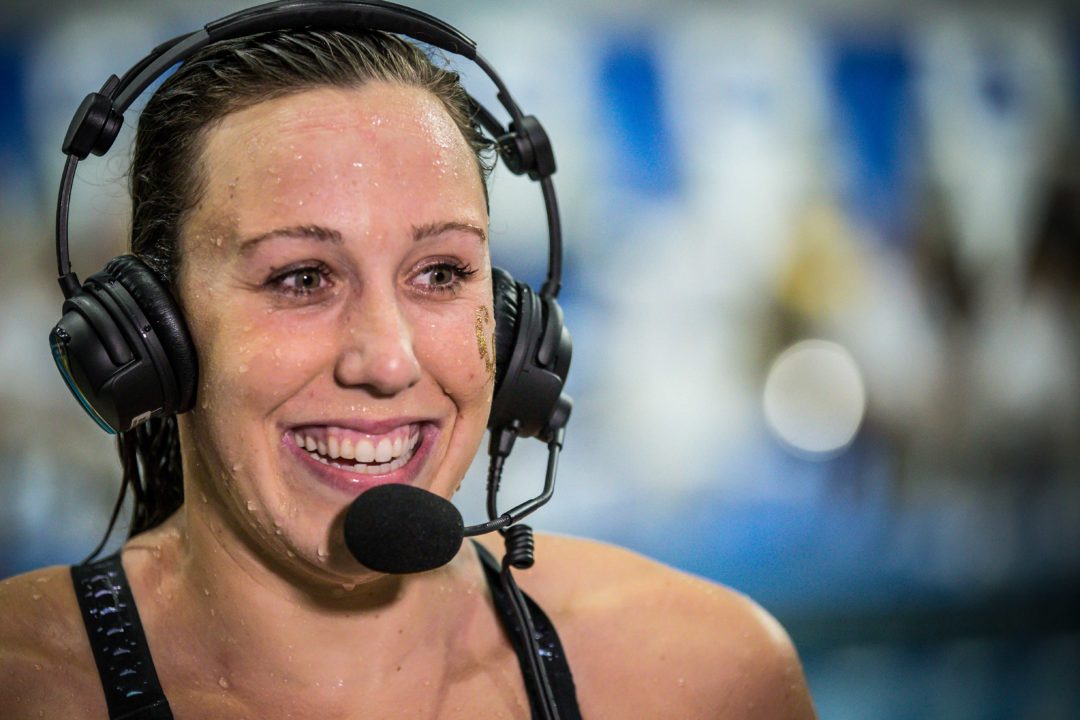 After setting an American record in the 50 free during the shortened 2019-20 NCAA season, Weitzeil becomes the sixth Cal swimmer to win the award. Current photo via Jack Spitser/Spitser Photography

Tennessee’s Erika Brown, Michigan’s Maggie MacNeil, Wisconsin’s Beata Nelson were the other three finalists for the award, which honors the best female swimmer or diver of the preceding NCAA season. The nominees are chosen by a panel of coaches from the CSCAA.

Weitzeil set the American and U.S. Open record in the 50 free (20.90) in December, becoming the first woman in history to break the 21-second barrier.  She set a Pac-12 meet record in winning the 50 free in 21.03 before injuring her arm and missing the rest of the 2020 meet, but was set to compete in the 2020 NCAA Championships before its cancellation. The Saugus, CA native captured a silver medal at the 2019 World Championships as part of the U.S. 400m free relay that set an American record.

“I am so incredibly honored to be the recipient of the Honda Sport Award for swimming this year,” Weitzeil said in a Cal press release. “It is so special to have my name next to the other Cal swimmers that have won in the past. They are a major part of Cal’s history and legacy, and to be able to add my name to that list and represent Cal this year is amazing. This would not have been possible without my coaches, teammates, staff and support system that all helped me through this last year, and so I send a huge thank you to all of them, as well. Go Bears!”

She will now contend with the winners of the 11 other sports for Collegiate Woman Athlete of the Year and the Honda Cup, which has been won by a swimmer in three of the last five years. Franklin won in 2015 and former Stanford teammates Katie Ledecky and Simone Manuel went back-to-back in 2017 and 2018.

“The Honda Award is the premier honor available for female collegiate student-athletes, and I’m thrilled for Abbey that she is this year’s recipient for swimming,” Cal head coach Teri McKeever said. “She had an outstanding season and seemed to set a record almost every time she raced, highlighted by her American record in the 50 free this past December. As one of our co-captains, Abbey was also a terrific leader in and out of the pool, and I expect we’ll see even more from her in the years ahead.”

The CWSA explained in its announcing the finalists last week:

Congrats to Abbey, but Brown had the better season. Looking forward to seeing them go head-to-head at OTs!

Congrats to Abby and all nominees. Great seasons by all 3 and I understand it’s hard to pick in this situation. However…

Weitzel just does not get beat by Brown. Cal does not get beat by TN. Probably factored in is IF NCAAS were held, Weitzel woulda mugwumped Brown as usual…dont forget that every year Brown falters at NCAAs. Abby is the right choice for certain. But I agree Brown should be the runner up.

Woohoo! I love when swimmers win this or other big awards.
I would have loved to see what she could do at NCAAs.

Congrats Abbey and good luck with your career!