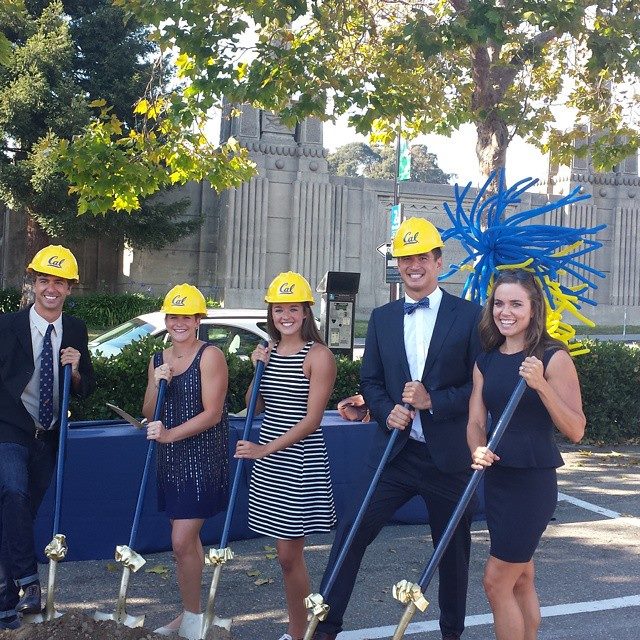 California Olympians Anthony Ervin, Caitlin Leverenz, Rachel Bootsma, Nathan Adrian, and Natalie Coughlin were at the University of California this evening to break ground on their new $15 million facility.

The new facility is being built primarily for training purposes, but will be able to accommodate around 500 spectators for swim meets and water polo matches. The facility will also be an athletics-only facility, which will open up more time in Spieker for the general student body.

California has been one of the most successful programs nation-wide in recent years. Their women’s team, led by triple individual event champion, Missy Franklin, won the NCAA Championship meet this season. The new pool is a renewed sign of commitment for an aquatics program that has produced multiple Olympians and NCAA Champions, including the athletes pictured below during the ground breaking ceremony.

The project will be funded by Cal Aquatic Legends, an alumni donor group; that group, in fact, has negotiated for full control over the construction of the facility, including working with architects and supervising the construction on land that has been granted by the university.

The new facility will have a 50-meter by 25-yard outdoor pool, as well as a new platform diving tower. Cal has sent Kahley Rowell to the NCAA Championships as a platform diver the last two years, despite her having to use Stanford’s facility to train.

Construction of the new pool is expected to take 12-15 months to complete. The new facility will be located on the very southwest corner of campus, replacing an old parking lot, and about a block away from Spieker.

Governor Cuomo, how about building a 50m pool here in NY?

Haha, I believed that most of you in USA were allergic to public money spending! And now you want a 50-meter pool? 😆 I don’t understand anything! 😆
Those on the right or far right of your current useless and dangerous congress always say they want to spend less but at the same time they continue to waste your money each year with HUGE cheques to their billionaire friends or their oil companies friends (of course they need to thank their very generous donators). And they refuse to spend it to make the infrastruture investments your country desperately needs.
The problem or the reality is that if you want roads, bridges or high speed rails, you can do… Read more »

Lay off the MSNBC Kool-Aid, Bobo. 🙂

I agree that it is great that some strapping capitalists stepped up to fund the building of a great pool for these deserving academicians. However, I’m no supporter of handouts to anyone (except maybe the Marshall Plan to build some trains for the Frenchmen). How are things in France these days anyway?

How about a 50m pool in Montgomery, AL. Since there isn’t one near by..

You have a 50 meter indoor pool in at the Columbus Aquatics Center in Columbus, GA. They configure it long course during part of the year, but generally it is set up short course for most of the year.