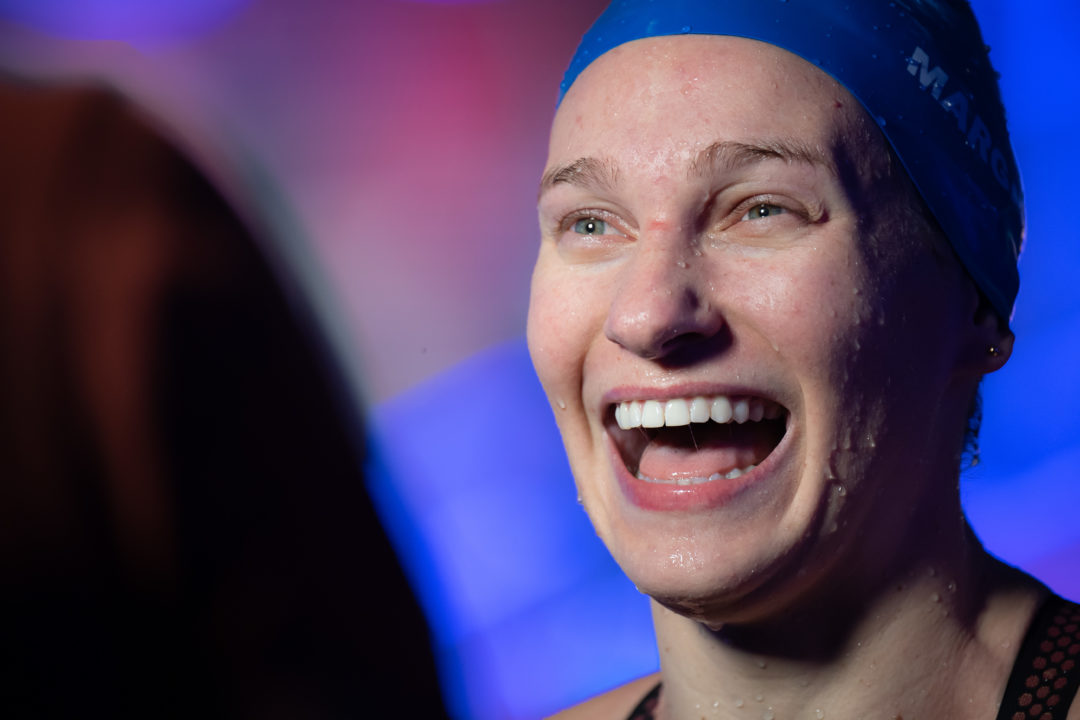 Cali Condors star Melanie Margalis, who ranks 30th in the league in MVP scoring this season, will miss the playoffs of Season 2 of the league. Archive photo via Mike Lewis/ISL

Melanie Margalis of the Cali Condors will be leaving the Budapest bubble and not participating in the playoffs for what is being termed ‘personal reasons,’ general manager Jason Lezak confirmed on Monday.

Margalis was absent from the start list for the opening day of the team’s regular season finale on Monday, but many teams rested their star swimmers with their spots in the semi-finals already ensured.

Margalis, who was part of the top women’s squad in the league with the Condors, ranked 30th in league MVP scoring through the 4th week of competition. That ranking comes even without swimming in any of the high-points skins events. That ranked her 5th among all swimmers for the Condors, who are undefeated and sit atop the league table this season.

Margalis opened her season on fire in Match 1, where she was 6th overall in MVP scoring. That meet included breaking the American Record in the 200 IM. Since then, however, her performances have been slipping, which includes dropping the 400 free and 400 IM from her schedule entirely.

The Condors have Hali Flickinger as backup in those events, so they won’t totally vacate high placements with Margalis’ absence, but after that they could struggle in her events. Distance freestyler, and open water specialist, Haley Anderson has been filling in, finishing 7th in the 400 free (4:04.56) and 8th in the 400 IM (4:39.21) in Match #8. Her points in the 400 IM were stolen, meaning that she scored 2 total points in 2 swims at that meet.

The Condors do have an IMer, Kelly Fertel, on the bench who they’ve called up to fill in for Margalis at meet 10. Fertel, a former Florida Gator, hasn’t raced yet this season, and with a top 2 seed essentially secured, Monday will be a chance for the Condors to learn what they’ve got in their reserves headed toward the playoffs.

Oh no. Bummer. Hope she is ok though.

As a journalist, whenever I hear “personal reasons,” I assume that just means they don’t want to tell anybody why. It’s sort of a catchall used from everything from Shayna Jack’s positive doping test before Worlds to Pieter Timmers’ promise to come home to his wife.

I wouldn’t read too much into it until there’s more information. That phrase has been diluted to the point of being akin to a no comment.

I hope she is not positive (to covid) , and they keep it secret to avoid panic approaching the semi-finals.. looking at her ig and performances so far, she was pretty stocked to represent the condors

Relax. If she got the flu, sorry covid, she will be just fine. Like the vast majority of the public. People…..

Over 1.3 million people have died

She probably misses that Georgia cooking