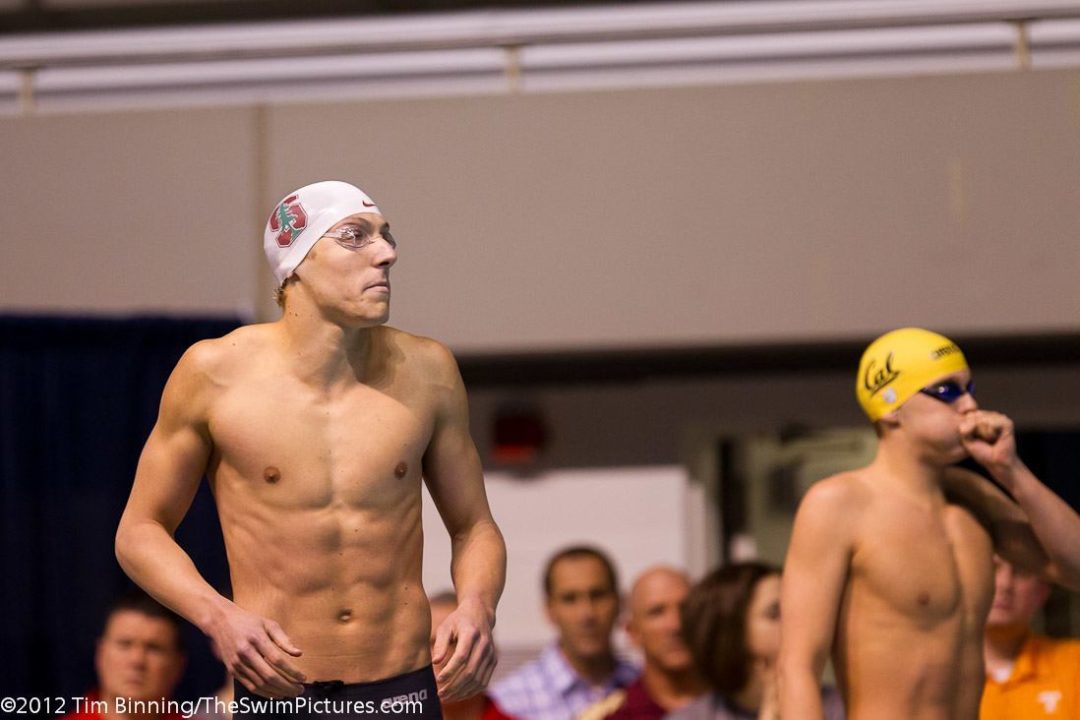 On Wednesday evening in Palo Alto, the Stanford men played host to Cal in their annual “triple distance” meet. In this event, athletes are divided into 6 different groups, based on stroke specialty, with each one swimming three different distances of that specialty: butterfly, backstroke, breaststroke, sprint freestyle (50/100/200), distance freestyle (200/500/1000), and IM (100/200/400).

The Cal men are a bit shorthanded this fall between injuries, alternative commitments, and a few other issues, and as such are still without swimmers like Tom Shields and Seth Stubblefield: both of whom were a part of Cal’s NCAA Championship relays last season. That left Stanford to dominate at least the sprint events, where they took victories in the shortest races in 5 out of the 6 disciplines.

That included a 20.18 win in the 50 free by senior Aaron Wayne, followed by a 20.50 from his teammate Andrew Saeta for 2nd. Junior Shayne Fleming was the highest-finishing Bear in that race, taking 3rd in 20.61.

David Nolan won the 50 backstroke in 22.42, which early in the year is just a second away from his leadoff 200 medley relay split from last year’s NCAA Championships. He showed a lot more on his speed than his endurance at this meet: he also won the 100 back in 49.06, but ended up only 3rd in the 200 in 1:47.27. That left him behind teammate Matthew Swanston (1:46.15) and Cal junior Marcin Tarczynski, who won in 1:45.71. That ranks the Polish swimmer 4th in the country so far this season.

A pair of freshman, one for each squad, won individual events as well in a great head-to-head battle in the IM events. Stanford rookie Gray Umbach, the top-ranked recruit in the class of 2012, won the 100 IM in 50.98, placing him ahead of Cal newcomer Josh Prenot (51.12). Prenot, however, would fight back for narrow victories in both the 200 and 400 IM’s.

Cal’s Trevor Hoyt was the most dominant swimmer in his specialty as he was the only triple-winner. He first took the 50 in 25.67, then the 100 in 55.35 (blowing away Stanford’s Mason Shaw by more than a second) and finishing with a 200 win in 2:00.94. Not that Cal is ultra-deep in this stroke beyond Hoyt and Prenot, but this meet highlighted just how big of a hole Stanford has in their breaststrokes.

Cal, despite missing much of their sprint group, did fairly well in the relays. They won the 200 free in 1:20.71, including a 19.66 anchor from Fleming, to rank 4th in the country. Stanford has been better than that this year, but here only mustered a 1:21.65 (without top guns like Nolan or Wayne on the relay).

The Cardinal, though, with Nolan AND Wayne on the relay, swam a 1:29.28 to win the medley. Interestingly, they’ve got Nolan swimming the breaststroke leg, which might be a wise decision given their relative depth in the backstrokes. Nolan outsplit Cal’s Hoyt 24.79-24.90 on that leg: perhaps a bit of a secret-weapon headed toward NCAA’s.

The times from across each group’s three distances were aggregated to find 6 winners:

Thanks for the reporting & I don’t care if there are typos!

Thanks for the Pac 12 update. As you noted the Bears have been without Shields, Cox and Messerschmidt this entire fall season and highly regarded frosh Jacob Pebley has missed Cal’s last two meets. Still, Josh Prenot has looked as advertised and should be a factor in March.

As I looked at the A and B cut times included in the Cal/Stanford results I noted that they are quite different than the times you posted in an article dated October 3rd. Can you post the current cut times?

h2ofan – I’m 95% positive that the ones Stanford used in the results are last year’s cut times, but I will follow-up to make sure.

And Shimomura and Lyon as well.

Shimomura and Lyon were able to swim versus Wisconsin this past Saturday. I don’t believe DeZwierk has participated in any of the men’s meets so far.