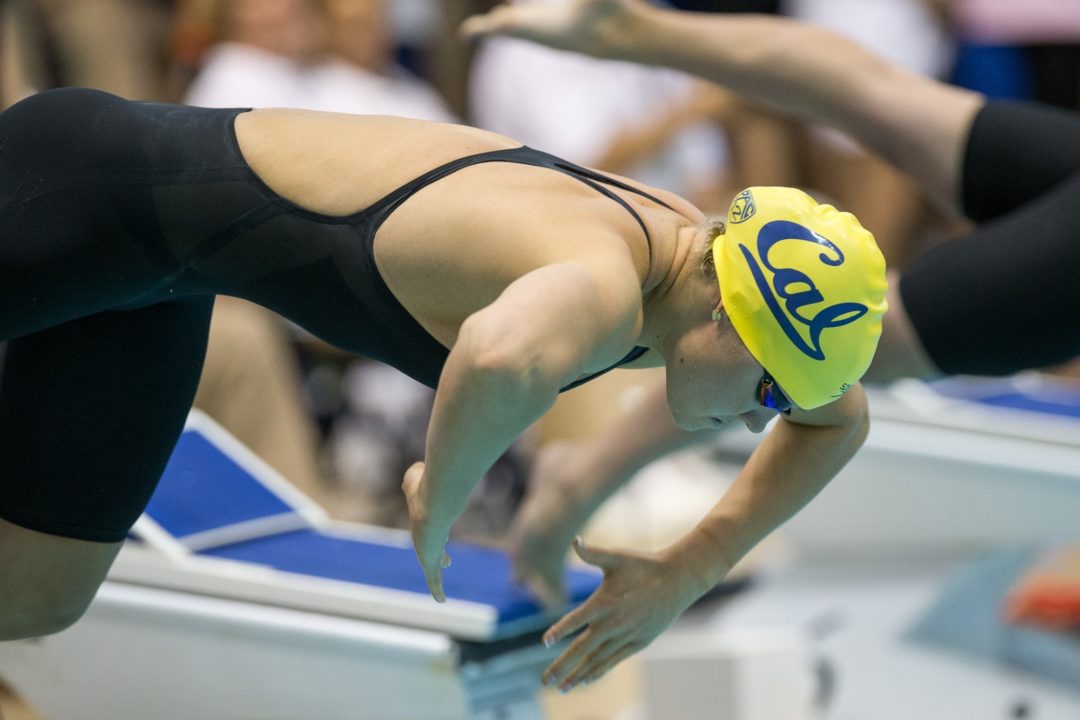 Elizabeth Pelton and the women of Cal jumped from 4th to 1st in this week's CSCAA rankings in Division I. Archive photo via Tim Binning/TheSwimPictures.com

Editor’s Note: SwimSwam is not on the voting panel for the CSCAA Dual Meet Rankings, but are posted as a courtesy. See our most recent women’s Power Rankings here.

The California Golden Bears have launched to the top of latest College Swimming Coaches Association of America poll, riding a big weekend at the Georgia Invite to rise from 5th in the last set of rankings.

They pass up previous leaders Texas A&M, who dropped down to 4th, their finishing spot at last year’s NCAA Championships. The top 3 ranked teams are now the top three finishers from a year ago – defending NCAA champs Georgia remain second after their home invite, while 2014 NCAA runners-up Stanford are still ranked third a few weeks after their mid-season rest meet in College Station.

CSCAA NCAA Division I Women’s Swimming and Diving Ranking as of December 10, 2014

The Dual Meet Rankings are a little bit deceiving since everyone just swam in Invitational meets. It might make more sense to change the name to something else.

That’s true. The only rankings that really matter are at either the conference meet (for some), and for others at NCAAs.

Since the regular season in swimming doesn’t really mean anything if you really think about it. And the rankings are just supposed to reflect the times teams have done up til that point, why do we have a ranking system in the first place? Can anyone answer that?

The Cal women swam well and are certainly worthy of the number one ranking. However, they went from 5 to 1 jumping past Georgia when the lady bulldogs actually won the meet. The reality is that these rankings and most in season meets have little real value. Are swimmers getting “A” standard swims and qualifying for NCAA’s is more informative. Most of the swimmers that will score points in March won’t swim tapered until February or many in March, which is why the NCAA’s are such a wonderful and wide open event. It just seems a little odd that the week they move to #1 comes after a meet in which they didn’t finish #1