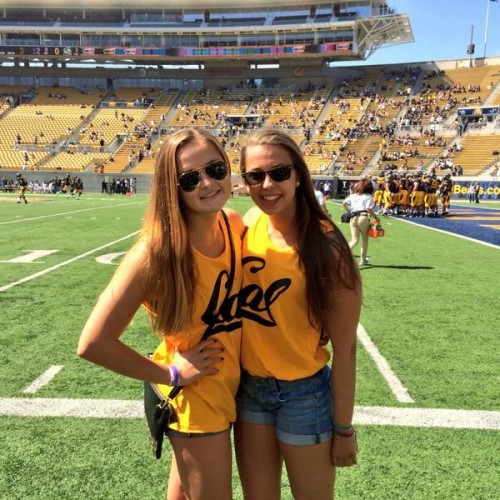 Above, Kathleen Baker and Katie McLaughlin, lead the way on a dense Cal women's recruiting class.

Below is a press release prepared and submitted by the Cal Sports Information Department.

“I’m really excited about this class because each of them can contribute in multiple events,” head coach Teri McKeever said. “They’re young, enthusiastic and passionate. Most importantly, I think they’re the right fit with their personalities and their academics. What they were looking for and what we were looking for definitely matched.”

Baker, in the 100-meter backstroke, McLaughlin, in the 200-meter butterfly, and Weitzeil in the 400-meter free relay, will represent Team USA at the World Championships next summer in Kazan, Russia. All three also swam at the Pan Pacific Championships in Australia, the top international competition of 2014, earlier this year. Bilquist, meanwhile, captured five total medals, including four gold, at the 2014 Junior Pan Pacific Championships. Campbell is a local product out of Palo Alto who is a two-time section champion in the 200-yard fly, and Lamay finished eighth on the 1-meter springboard at the 2014 national diving championships.

According to swimswam.com, Weitzeil is considered the nation’s No. 2 recruit, with Baker No. 3, McLaughlin No. 4 and Bilquist No. 5.

Bilquist returned home to Carmel, Ind., and the Carmel Swim Club earlier this year with gold medals in the 50 free, 100 back, and 800 free and 400 medley relays, plus a silver in the 400 free relay, from the Junior Pan Pacific Championships. She will also be on the U.S. squad at the 2014 short-course world meet in the 50 and 100 back.

McLaughlin, from Dana Point, Calif., earned a bronze medal in the 200 fly while also finishing fourth in the 100 fly at Pan Pacs last summer. A four-time medalist at the 2013 World Junior Championships, she also won the 100 and 200 fly at the ’13 Junior National Meet. In addition, McLaughlin broke the national high school record in the 100-yard fly at the 2014 CIF Championships.

Weitzeil hails from Saugus, Calif., and will come to Cal after earning a silver medal as part of the 400-meter relay at Pan Pacs. She was a finalist in both the 50 and 100 free at the 2014 National Championships, setting a 17-18 national age-group record during her fifth-place finish in the 50 free (24.91). In addition, she earned a pair of medals on relays at the 2013 World Junior Championships in Dubai.

“Taking part in international meets helps them gain a lot of confidence that they’ll bring to our program,” McKeever said. “It means we have more people that are at and striving for that level of achievement, which I think elevates our whole team. When you have the opportunity to compete and meet people from all over the world that are the best of the best, it raises their game. I think that trickles down to all of us.”

Campbell competed in seven different events at the 2014 Junior National meet, including the 100, 200 and 400 free and 100 fly – and helped Palo Alto Stanford Aquatics to top-three finishes in the 400 free and 800 free relay. She comes to Cal from the same club program that also produced current Bears Rachael Acker, Camille Cheng and Alicia Grima.

“We’ve had really good success with swimmers from PASA, and they have a fantastic program,” McKeever said. “You know that you’re getting a great student-athlete.”

With the addition of McLaughlin, Baker and Weitzeil, six of the 25 members of the U.S. team for the 2015 World Championships will have Cal ties, a roster that will also feature junior Rachel Bootsma, sophomore Missy Franklin and freshman Cierra Runge. In addition, five Bears will be on the World University Games squad – Bootsma, senior Melanie Klaren, sophomore Celina Li, junior Elizabeth Pelton and Weitzeil.

As a team, Cal has won three of the last six NCAA Championships and has placed among the top three in the nation each of the past six years. Golden Bears swimmers have accumulated 40 Olympic medals, 54 individual or relay national titles, and 10 Pac-12 Swimmer of the Year awards.

Placed eighth on the 1-meter board at the 2014 AT&T National Diving Championships … finished 11th in the event in 2013 and 16th in 2012 … participated in the 2012 Olympic Trials and was 23rd on 3-meter … has also competed in synchronized diving and was ninth on 3-meter at the 2014 national meet with partner and current Cal sophomore Anne Kastler … was 13th on 3-meter at the 2012 Olympic Trials with Chloe Helmink … in 2011, Lamay and Helmink placed third in 3-meter synchronized diving at the Junior Pan American Championships in Medellin, Columbia … began diving at age 12 … older sister, Sophia, is a former national-level figure skater.

Awesome class for Cal, amazing talent, kudos and all that…

Great class by Cal. They are definitely keeping up with Stanford when it comes to recruiting. These two teams will duke it out for the next few seasons unless another school can put together blockbuster back-to-back classes.

It’s a very strange thought that Cal can lose arguably one of the greatest female swimmers in history (and not even to graduation) and still be just as loaded as before. Not that Missy is replaceable, but others can fill her shoes with good results.

McKeever deserves credit for putting together another very strong recruiting class, which will be ranked number one or two nationally. It’s not like relays were a problem area for Cal, but this class has strengthened their relays and it appears that the Bears have effectively replaced most of the individual points that will leave the program after 2015.

Despite that, Teri still hasn’t completely addressed the problems that plague the 2015 team: no breaststroke individual scorer, no diving scorer, and another distance scorer to complement Runge. Kathleen Baker can fill the breast hole on medley relays, but she’ll never be a full time breaststroker, especially in an Olympic year. With Georgia imploding, Cal has a chance to win another… Read more »

This is such an awesome class and I didn’t even know about the two additions until now. GO BEARS!