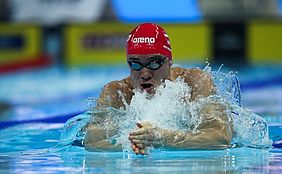 A total of six national records bit the dust over the course of the Austrian Short Course Championships, with Bernhard Reitshammer knocking down two of them. Archive photo via ATUS Graz

Due to coronavirus-related regulations, just 100 women and men were able to compete at these championships, selected based on Austrian national rankings.

Simon Bucher was especially impressive, taking down three national records single-handedly over the course of the meet. In addition to establishing new Austrian standards in the 50m fly and 100m fly with marks of 22.07 and 50.37, respectively, Bucher took down the longstanding national 50 back record as well.

Set at 23.98 by Olympian Markus Rogan back in 2009, the 50m backstroke record was eliminated by Bucher, who put up a quicker 23.73 en route to victory on the final night of action.

After all was said and done, Bucher reflected on his historic performances. “I can’t put that into words yet. You always look up to people like that [Rogan] and then suddenly you are faster. Incredible.”

As for 26-year-old Bernhard Reitshammer, the man found success in the 50m and 100m breaststroke events, establishing new Austrian national records in each. In the former, Reitshammer threw down a mark of 26.32 to outperform the previous NR of 26.38 he set himself in December of 2019.

In the longer event, Reitshammer produced a solid swim of 57.15 to continue his dominance in the discipline in Auster Graz.