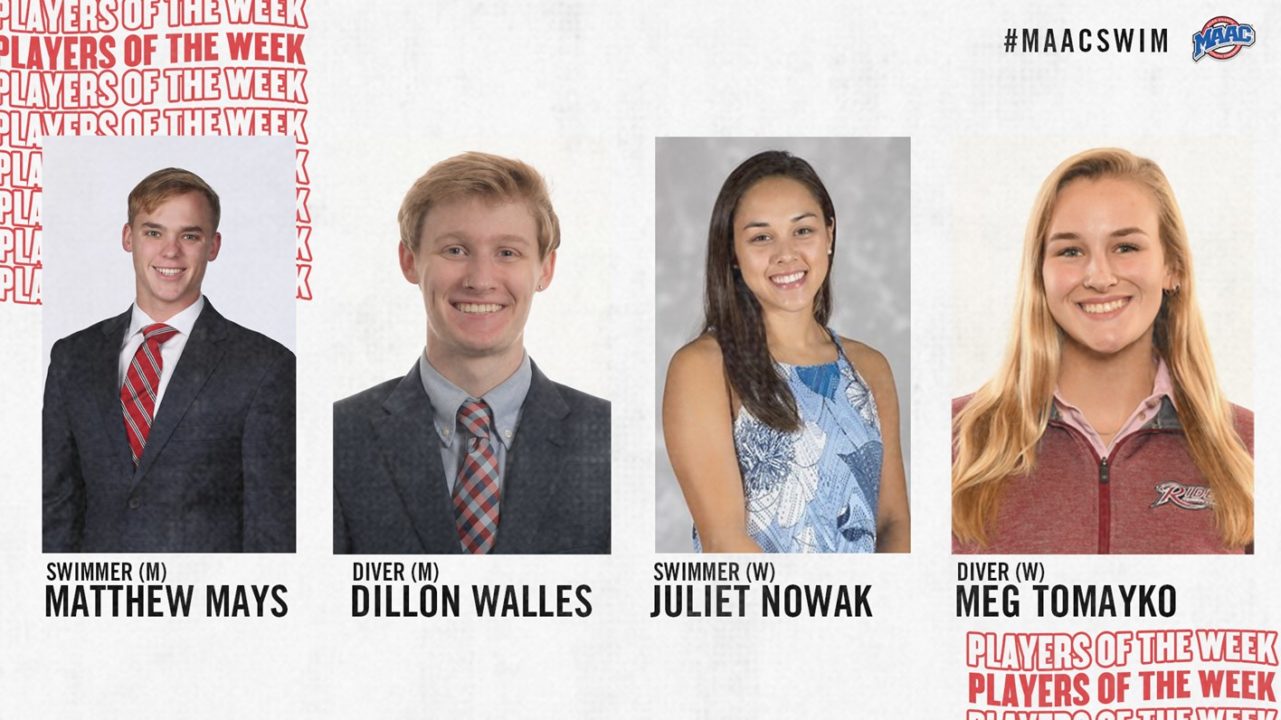 Men’s Swimmer of the Week
Matthew Mays, Bryant
Jr., St. Croix, Virgin Islands/ Good Hope Country Day
Against Marist on Saturday, Matthew Mays won the 100 and 200 backstrokes with times of 51.37 and 1:51.64. He also was a part of the second-place team in the 200-medley relay.

Men’s Diver of the Week
Dillon Walles, Rider
Jr., The Woodlands, TX/ The Woodlands High School
Junior Diver Dillon Walles continued his dominance on the boards for the Broncs last week. In a dual-meet victory over Lafayette, Walles won both the 1M and 3M diving events. He has won both diving events in seven straight meets. He finished first overall in the 1M with a score of 339.90 and he also came in first in the 3M at 334.05.

Women’s Swimmer of the Week
Juliet Nowak, Marist
Sr., Secaucus, NJ/ Secaucus
Senior captain Juliet Nowak set the tone early for the Red Foxes, getting the team on the board with
their first individual first-place victory. She finished with a time of 59.23 in the 100-yard back.
Nowak also finished with a time of 28.01 in the 50-back portion of the 200-yard medley, helping
Marist get on the board early. She was the highlight of the meet for Marist, leading the team with 14 points, also finishing in second place in the 200-yard back with a time of 2:08.48.

Women’s Diver of the Week
Meg Tomayko, Rider
Sr., Murfreesboro, TN/ Siegel
Senior Meg Tomayko had another impressive performance on the boards last week for the Broncs. In a dual-meet victory against Lafayette, she won both the 1M and 3M. It marked the second meet in a row that Tomayko won both events. She finished first in the 1M with a mark of 278.25 and she tops in the 3M with a score of 265.57.