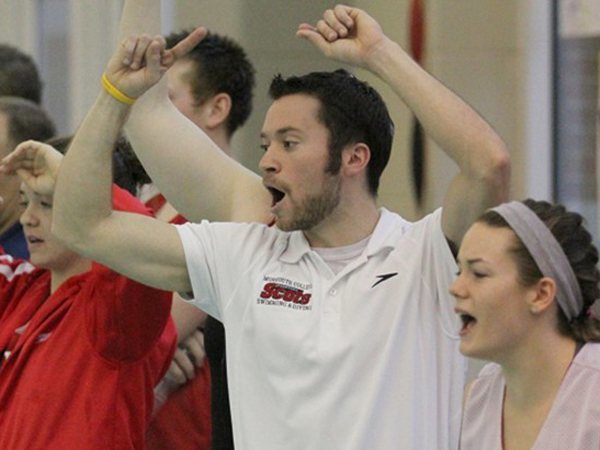 The Brown Bears left their mark against UMass Amherst as they won every event and had a strong show from their underclassmen. Current photo via www.brownbears.com

As the Brown Invitational was going on for the women, the Brown men faced UMass Amherst and dominated in their home pool with a score of 201-93. Brown won every event on the swimming side but fell to the UMass divers, which carried very few divers on the men’s side compared to the women’s roster.

Josh Koppel of UMass dominated both boards by almost 50 points while Brown’s Jonathan Schlafer took second. In third for 1 meter and just 4 points shy of Schlafer was Sazzy Gourley and Barry Roberts of UMass took third on 3 meter.

In the 400 medley relay the Brown A-relay of Alexander Pascal, Thomas Mercurio, Thomas Glenn and Oliver Diamond took first with a 3:24.05. Pascal had the fastest backstroke split in the field by over a second which was also displayed in his win in the 100 backstroke, then showed off his sprint speed in Brown A-relay which won the 200 free relay. Mercurio played a great roll in the relay but showed his mid-distance strength in the 200 breaststroke and took first with a 2:05.92. The Brown B-relay of Paul Hunter, Connor Lohman, Jeffrey Strausser and William Lacosta took second with a 3:27.16.

Connor Lohman and Thomas Mercurio went head to head in the 100 breaststroke as Lohman took first with a 57.52 while Mercurio took second with a 58.88. Edward Kim represented UMass and took third with a 1:01.31.

Jack Nee came back for the 100 free and took third with a 47.98 as he just fell short to Wiktor Karpinski of UMass in second with a 47.89 while teammate Oliver Diamond took first with a 47.59.

Once again, Thomas Mercurio and Connor Lohman faced off in the 200 breaststroke as Mercurio had more front half speed and barely out-touched Lohman with a 2:05.92. Lohman took second with a 2:05.96 and third was Michael Glenn with a 2:09.56.

Wrapping up the meet with the 200 free relay was a first place finish by the Brown A-relay with a 1:22.53 and consisted of Thomas Glenn, Alexander Pascal, Jack Nee, and Jeffrey Strausser. Second place was the UMass A-relay of John Conway, Wiktor Karpinski, Troy Nichols, and Brian Stiles with a 1:25.05.