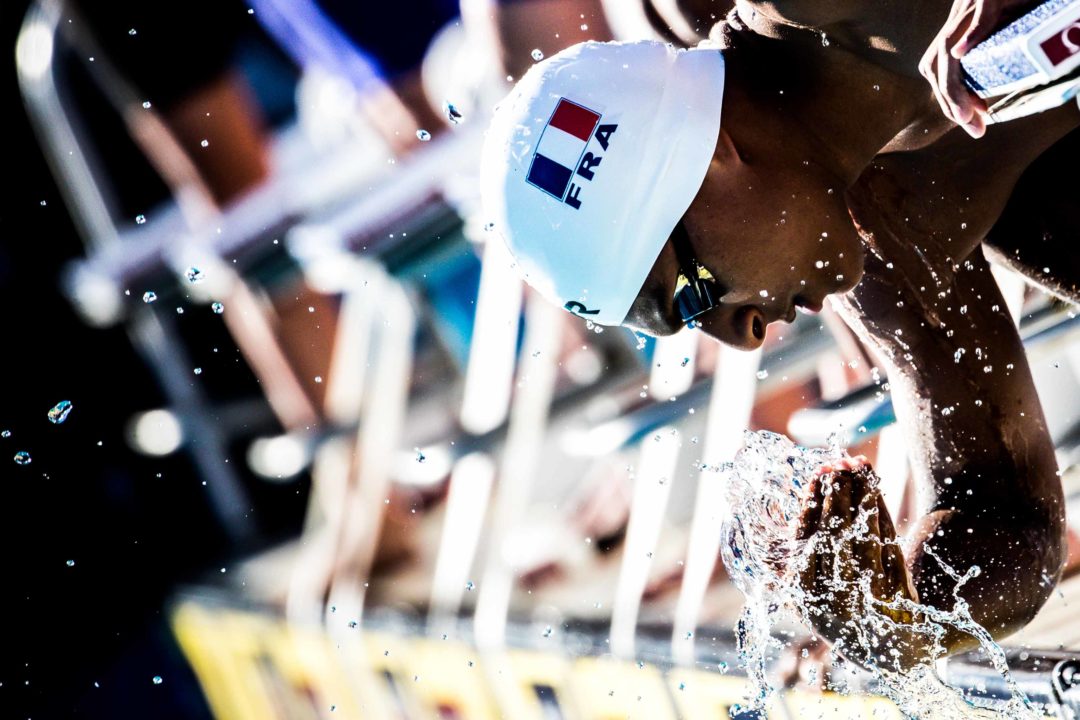 The future of France's backstroke battled tonight in the men's 100 back, as Yohann Ndoye Brouard went a 53.60 lifetime best tonight. Current photo via Jack Spitser/Spitser Photography

The future of France’s backstroke battled tonight in the men’s 100 back, as Yohann Ndoye Brouard followed up his 53.88 prelims swim with a 53.60 lifetime best tonight. Brouard won against Mewen Tomac, who’s a year below him; Tomac was second in 53.97, while Greek record-holder Apostolos Christou nabbed third (53.99).

Brouard improves upon his old best by .20, and he moves closer to eclipsing the #3 performer in French history, which is Tomac at 53.29. He now sits #9 in the world rankings this season, just .05 behind world record-holder Ryan Murphy’s 53.55 from the Pro Swim Series – San Antonio last month.

The men’s 400 free tonight in Nice ended in fireworks, as the top three finishers all hit 3:50’s. Hungarian teenager Gabor Zombori emerged victor, winning with a time of 3:50.09 ahead of Greece’s Konstantinos Englezakis (3:50.42) and Hungarian star Kristof Milak (3:50.71). France’s Marc-Antoine Olivier was a close fourth, posting a 3:51.05.

The 400 IM came down to a close finish, as Swiss record-holder Jeremy Desplanches just barely held off the charge from Apostolos Papastamos, born in 2001. Desplanches took the win at 4:15.26, just ahead of Papastamos, the former world junior record-holder, who was 4:15.81. Hungary’s Peter Bernek also dipped under 4:20, going 4:19.33.

In the women’s 100 fly, Greek record-holder Anna Ntountounaki dropped a big 57.86, rattling her own national record of 57.77 from 2018. That’s still a fantastic swim for her in January, well outside of the summer championship season, and she jumps to the #10 ranking internationally this season. 2003-born Frenchwoman Lilou Ressencourt broke a minute for second place, going 59.96.

Melanie Henique cracked 25 seconds in the 50 free, winning over countrymate Charlotte Bonnet, 24.90 to 25.18. Henique set the French record in this race in her 24.34 outing at the French Elite Nationals in December.

He did. He swam a little local meet last weekend just to score points for is club, but for all intents and purposes, as far as we know he’s still retired from serious competition like the Olympics.

Yes that’s right, I saw him swim the EuroMeet in Luxembourg in January 2020 where he went 50.8 in the 100 free. A few weeks later he announced he was done with his career. Such a talented swimmer, always did well for the French relays. Good to hear he still enjoys hopping in the pool for his local team.

I thought that their swimming was dead a while ago, but they have some nice talents (Brouard, Tomac, Grousset, Marchand). I don’t see any of them becoming medal contenders, but all of them have the potential to reach finals at world level. France might actually win 2 medals in Tokyo (Aubry in the 800 free and Manaudou in the 50 free), which is 2 medals more than i expected just a couple of years ago.

I think they could finish 4th or 5th in the 400 free relay, but unless at least 2 out of Brazil/USA/Italy/Russia mess up, i don’t see any chance for them to win a medal. In the medley relay they have no chance for a… Read more »

I think only your split for Brouard is realistic, especially the free split seems unlikely. Which french guy (if Metella doesn’t swim) is remotely capable of going 47 low? I think Grousset could split 47 high, but that’s probably about it. At the last world championships their best split was 47.84 by Metella and their 2nd best split was 48.25 by Mignon (flat start, which probably translates to around 47.7 flying start).

If you sum up best performer per stroke, you will get easily under 3:30.

A part from butterfly (where we struggle to have a guy under 51”), the other split are outstandingly covered: Italy will be a contender for a medal in the 4×100 medley

No, Italy won’t be a contender unless the US, GB or Russia mess up. Even Russia is clearly better than Italy when you look at the individual times. 4th place should be the best possible realistic result for Italy.

There are a lot of “ifs” for the 4x100medley but it does look like 7/8 teams can realistically go under 3:30 which is a big improvement vs previous years.

I only see Aubry as a potential medaler

French open water is pretty good at the moment