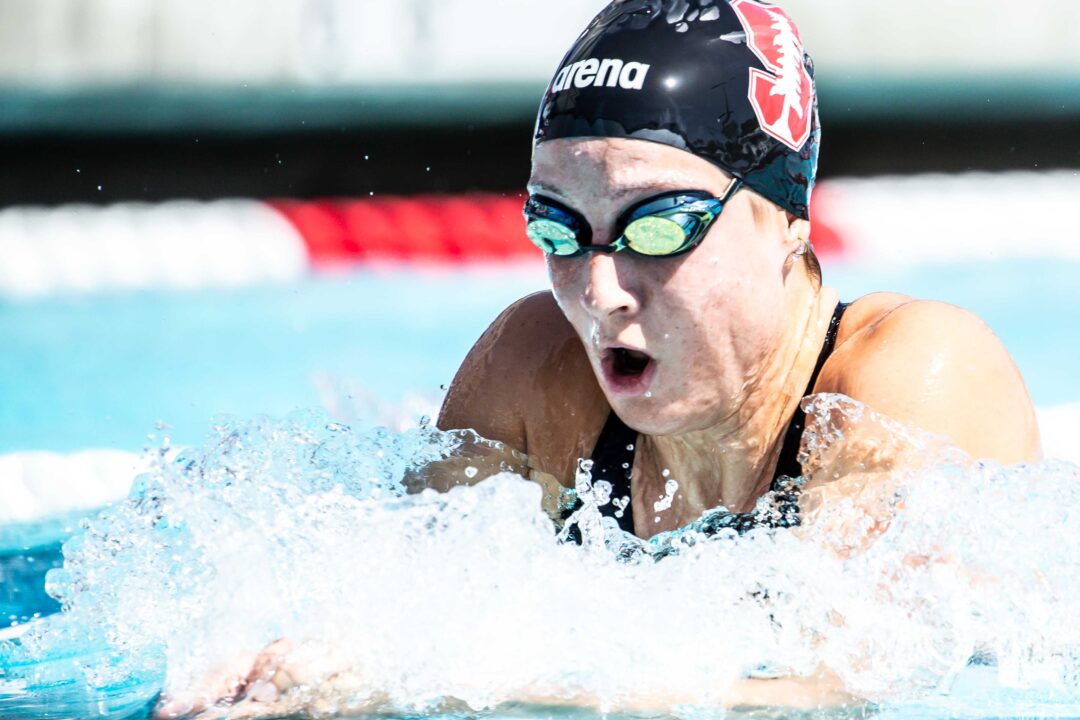 NCAA champion Brooke Forde will return to Stanford for one more season of NCAA eligibility while pursuing a masters degree. Archive photo via Jack Spitser/Spitser Photography

NCAA champion Brooke Forde will return to Stanford for one more season of NCAA eligibility while pursuing a masters degree.

Forde told SwimSwam this week that she’s been accepted to a one-year masters program through Stanford, and plans to continue swimming while working through that program.

Athletes have the opportunity for a fifth year of NCAA eligibility due to the coronavirus pandemic, which canceled the NCAA Championships in Forde’s junior year. She scored 20+ points in each of her three NCAA Championships appearances, including 43 points as a sophomore in 2019.

Forde’s return should be a major boost to Stanford next season. She was the team’s top individual scorer by a longshot, putting up 40 individual points. No other Stanford swimmer scored more than 11 individually. In three seasons, she was the #1 overall scorer nationwide in the high school graduating class of 2017, scoring 104 points. Next year, she’s likely to add 40+ to that total.

Stanford had a handful of key athlete defer their enrollment last year. Between fifth-years like Forde and gap-year freshmen like Regan Smith and Lillie Nordmann, Stanford should have some significant star power joining their roster after a disappointing 9th-place team finish in 2021.

sheeeeeesh! this news is bussin no cap

Sorry but imma be that guy…

Looks like she miscounted her laps, and is now swimming a fifth year!

I realize that everyone is focused on the Olympics, BUT next year, Stanford will have Reagan Smith, Taylor Ruck AND Brooke Forde, Plus many above average swimmers, so any early bets on the Women’s NCAA Championship? Wow!

Torri Huske will also be joining the team next season!

Ruck has got to be a big question mark at this point. Smith and Huske would be an extra 100+ points which really isn’t enough to win. Covid seems to have killed whatever they had going prior to 2020.

Covid killed their momentum for a year. Could be a chance that the slump goes into next year but if I were a gambling man I’d gamble on them being at least #2 at NCAA’s next year. Virginia will still be tough and I think they will need Ruck in relays in order to have a shot.

I’m waiting to see Ruck perform this summer before I worry about her. I’m not sure why people seem to be down on her. Covid was a tough year and lots of people didn’t compete that much. I’m not sure if there has been any news on her or if people just assume there’s something wrong because they haven’t seen her compete that… Read more »

I think they might be questioning if she will even return to Stanford, not her impact.

Ruck took online courses, so that she was included in the 17 Stanford Swimmers on the PAC-12 Academic honors list just published.

Still question is Ruck is even going back…its been 2 years for her.

Why wouldn’t she? She left to train for the Olympics. I couldn’t imagine her not wanting to finish her education and athletic career at Stanford.

One more season to compete, masters from one of the best universities in the world….I wouldn’t pass it up either

They can just go ahead and hand next year’s national trophy over to Stanford. That team next year is stacked! I’m excited to see what kind of times these relays put up.

What is she studying for her major?

Brooke Fords major is Human Biology and she was also an academic all-American in 2021 with that major. This commonly a favorite major among the Stanford pre-Med students – lots of math, chem, and of course biology. 🤓