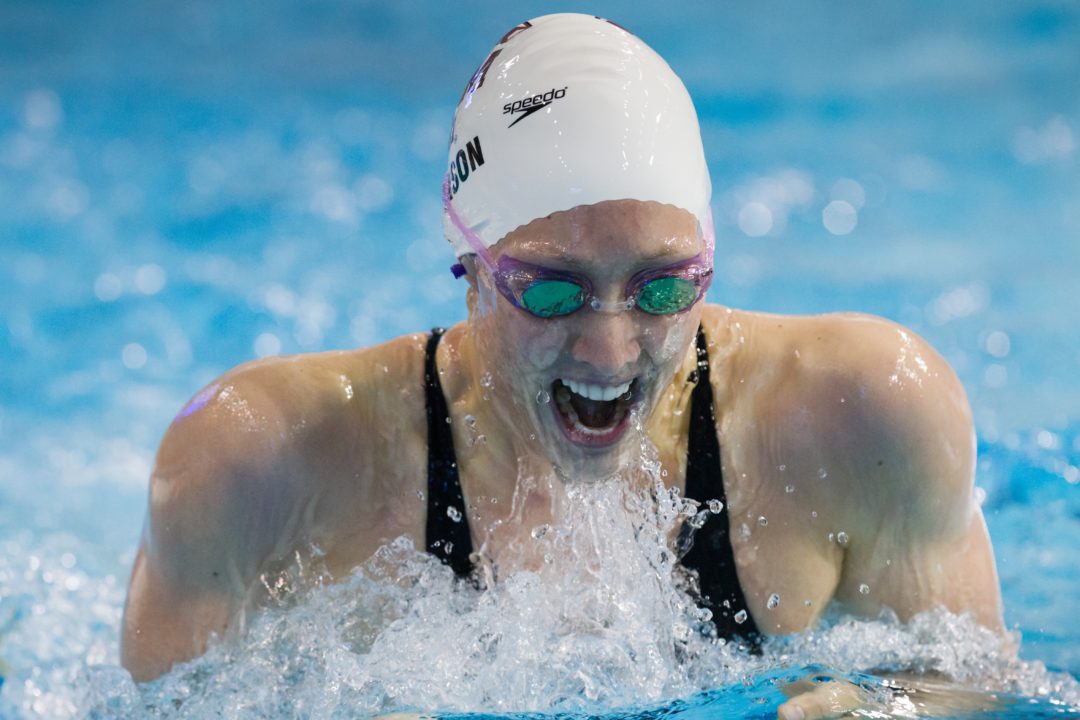 Breeja Larson might do something truly unbelievable this season in the 100 yard breaststroke. After making the Olympic team this summer, she has come out on fire this year. For the second time this season, the NCAA, American, and U.S. Open Record holder broke a minute: this time getting down to a 59.14, the first NCAA Automatic Qualifying time of the season.

For comparison, only two swimmers in the country were faster than that time all of last year, including a taper: USC’s Kasey Carlson and George Mason’s Ashley Danner. Breeja is swimming that time unrested. Presuming the Aggies keep the same training cycles as they did last year, Breeja could conceivably approach her NCAA Record of 57.71 at the midseason rest meet. Could she get under 57 seconds in the 100 breaststroke? I wouldn’t put money on it, but I wouldn’t bet against it either.

Larson’s 200 time of 2:10.31 is the 3rd-best time of the season, behind only two swims by counterparts at Cal and Texas also on Friday. Nobody would ever say that a 2:10.3 at this point of the season is anything less than an outstanding time, but what it does show is that she’s probably still training very hard, making her 100 time even more impressive.

A&M’s Cammile Adams is also having a great start to her year, with a 4:46.0 to win the 500 and a win in the 200 fly in 1:57.58. Those swims are important for different reasons: the 500 was the one race where she really struggled at NCAA’s last season, and the 200 fly is an event where she’s the favorite at this year’s NCAA Championships. She now ranks 4th in the country in that 200 fly.

In the 400 IM, an event where Adams nearly made the Olympic Team as well, she faced off against fellow Olympian Elizabeth Beisel as well as her teammate Sarah Henry: a World University Games qualifier who has been phenomenal since returning from injury.

Beisel has been unusually good early this season, and put up a 4:09.31 to win this race easily. Henry, though four seconds behind the Olympic silver medalist, still has to walk away very pleased with her 4:13.61 for 2nd, and Adams, at the end of a tough few hours of swimming, was 3rd in just 4:16.49. She hit on her first two swims, so should be able to brush off this third result.

The Aggie women also may have found the starting of a solution to their lack of sprinting depth: though sophomore Sammie Bosma was only a 23.6 in the 50 free individually, she anchored the Aggies’ 200 medley relay in a 22.8.

The men’s meet was dominated by the Gators, with the final score coming in at 197-98, with Florida exhibitioning the last three individual events (aside from a pair of event winners).

The best race of the night was probably the 200 fly, where British sophomore Dan Wallace from Florida squared off with Texas A&M’s Omar Enriquez, a Mexican returning from a redshirt year. Wallace ended up getting the win in 1:49.47, followed closely by Enriquez in 1:49.60. But the Aggie swimmer showed how important he’s going to be to this team this season, as he was closing like a freight train. Had the race gone another 25 yards, he probably would’ve caught Wallace. That sharpness of pace should come back as he gets back into the swing of yards racing.

In the shorter 100 fly, Florida’s Marcin Cieslak won in an outstanding early-season 49.11. His teammate Bradley DeBorde, a virtual unknown until very late last season, made a statement at this meet that he intends to be at the forefront all season long. He won the individual 50 free in a 20.22, anchored the Gators’ 200 medley relay in a 19.6, and swam a 43.9 on a rolling start on the 400 free relay. Lined up against what he was swimming at this point of last year (45-lows), it’s clear that he’s turned a corner and could even be a surprise National Championship contender.

Pretty impressive meet. I’m surprised Florida is swimming this fast right now as they did 4 straight days of doubles totaling roughly 15k a day plus weights leading into this meet. If they swapped out Cieslak for Rousseau, they’d have been a 2:57 high in the 400 free relay.

Speaking of Florida, is there any truth to the rumor that Andreina Pinto is now NCAA-eligible and will be joining the collegiate team?

LOL. Florida fan is so much fun.

If you don’t believe me about the practices, more than half of the team is on Twitter and a few of them post here.

The funny thing is not that we dont believe they did that, its that you dont think everybody else is doing that too!