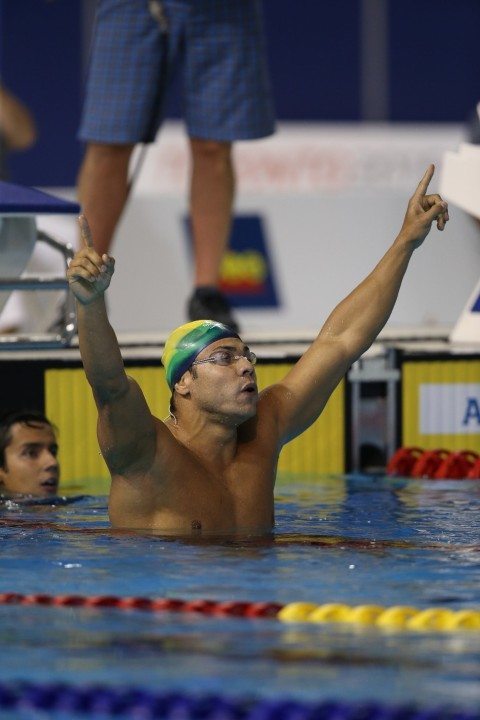 The men's 100 breast duo of Felipe Silva and Joao Gomes, who both could battle for a podium finish in Rio, got in a practice run at this meet. Silva worked on his back half speed in the race, charging to a quick 59.90. Current photo via Chris Tanouye

Several members of the Brazilian Olympic team swam in a tune up meet this past weekend, putting up strong results as we get closer to Rio.

The men’s 100 breast duo of Felipe Silva and Joao Gomes, who both could battle for a podium finish in Rio, got in a practice run in the event at this meet. Silva worked on his back half speed in the race, charging to a quick 59.90. Gomes, who swam a lifetime best 59.0 this season to rank among the top swimmers in the world, was 2nd behind him in 1:02.33.

Another Brazilian Pan Ams champion, Brandonn Almeida, swam the men’s 400 IM. Almeida was previously the Junior World Record in this event, and came close to reclaiming it this year with a 4:14.07 to qualify for Rio. At this meet, he was just a couple seconds off that with a 4:16.74. He also swam the 200 free, turning in a time of 1:53.40.

The men’s 50 free saw an interesting race between former Brazilian Olympian Gustavo Borges and his son, Luiz Borges. Borges was an international star for the Brazilians in the 1990s, having earned 4 Olympic medals from 1992 to 2000. It’s clear he still has some speed, as he swam a 24.96 at this meet to place 2nd behind Luiz, who won with a 24.37.