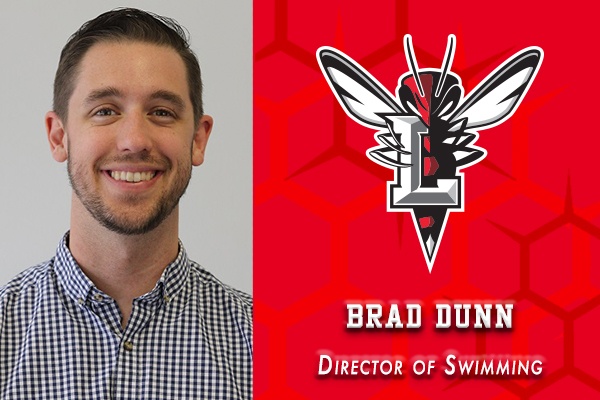 LYNCHBURG, Va. — University of Lynchburg and director of athletics Jon Waters are thrilled to announce the appointment of Brad Dunn as director of men’s and women’s swimming.

Dunn will oversee the reestablishment of the Hornets’ NCAA Division III swimming programs, which have been on hiatus since the 1970-71 academic year. Lynchburg will begin competition in the Old Dominion Athletic Conference in 2019-20.

“University of Lynchburg has all of the elements to grow an outstanding swimming program,” Dunn said. “The community, culture, and competitive athletic environment display the positive momentum of the university and communicate an eagerness to see swimming succeed.”

Dunn comes to Lynchburg from Southwestern University in Georgetown, Texas, where he was an assistant for the past year. Prior to Southwestern, he spent four seasons as an assistant at Rhodes College in Memphis, Tenn., where he helped the Lynx’s women’s team to its first-ever Southern Athletic Association title in 2015. Dunn and the Rhodes staff were named coaching staff of the year in 2014, 2015, and 2016.

A graduate of Virginia’s own University of Mary Washington, Dunn starred for the Eagles in the pool between 2007-11. He helped UMW to four Capital Athletic Conference championships and set league records in the 1,000- and 1,650-yard freestyle events. Two of his relay events also set conference records. Dunn was a selection on the CAC’s Silver Anniversary Team in 2015.

Coming home to Virginia was a cherry on top of the Lynchburg position, Dunn said.

“I am honored to return to my home state to reestablish a strong swimming culture at Lynchburg,” he said. “We are eager to build an ambitious swimming brand that will showcase talented student-athletes from Virginia and across the country. The support at Lynchburg is tremendous, and these are exciting times to be a Hornet!”

Dunn has connections to club swimming around the Commonwealth. In his high school years, he swam for Williamsburg Aquatic Club and longtime coach Harold Baker. After graduating from UMW, he stayed in the Northern Virginia working as an age group coach for national power Nation’s Capital Swim Club before moving into the collegiate coaching ranks.

“Brad understands what it takes to be a successful student-athlete and coach at the Division III level,” Waters said, “and we are excited to have someone with his background and experience join our Lynchburg family.”

The Williamsburg, Va., native holds a degree in Spanish with an economics minor from Mary Washington and a master’s in business administration from the University of Memphis.

He will assume his post at Lynchburg by the end of August.