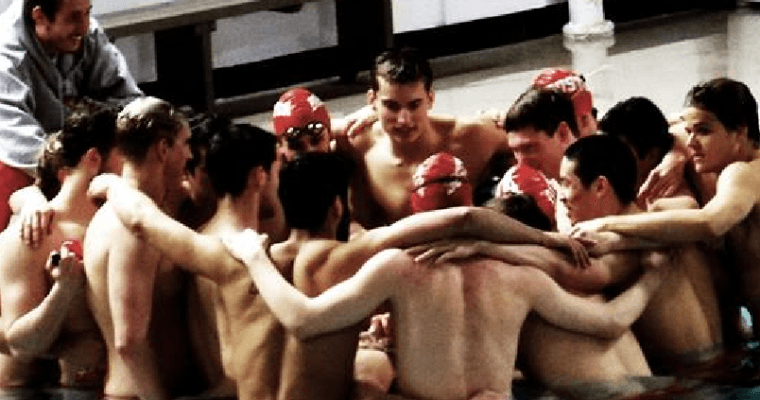 In a meeting on Tuesday morning on the pool deck, Athletic Director Drew Marrochello met with the team to inform them that their scholarships will be phased out. Current photo via Ryan Bach

Boston University Swimming and Diving is in a tough spot after learning that the Athletic Department has decided to eliminate all of the men’s scholarships and just slightly more than nine of the fourteen women’s scholarships in an effort to save money. The women will still have 4.9 scholarships for their team.

In a meeting on Tuesday morning on the pool deck, Athletic Director Drew Marrochello met with the team to inform them that their scholarships will be phased out. Although there is no indication the department will be cutting the team, many are still worried because of the similar situation the wrestling team was in a few years prior.

Boston University Athletics has acknowledged our questions but have not yet provided answers.

Both the men’s and women’s programs were fully funded prior to the Athletic Department’s announcement to the team this week. With the cost of attendance totaling over over $60,000 per year, eliminating nearly nineteen scholarships will save the department over $1,000,000 per year. The team was told that their current scholarships would be honored through their four years, but no new scholarships will be added.

Boston University was in a similar situation during the 2013-2014 school year when Athletic Director Mike Lynch eliminated the funding for the universities wrestling team and cut the program at the end of the season. This came just months after the International Olympic Committee voted to drop wrestling from its schedule for the 2020 games.

Kupke also told us that head swim coach Bill Smyth met with Lynch after the program had been cut to ask about the future of the swim team. According to Kupke, Coach Smyth was told that the swim programs would not be cut.

During the 2013-2014 school year, Lynch and Boston University received a ton of criticism from the student-athletes and members of the media. National media outlets such as the Boston Globe, USA Today, and ESPN picked up the story, along with smaller wrestling-focused media outlets, similar to SwimSwam within the swimming community. The wrestling program received a ton of support from around the country, but ultimately the program was still cut. Following that season, Lynch resigned from his role as the Director of Athletics. He never gave a reason for why he chose to resign from his role, but he did tell the media at the time that he did not yet know what the future held for him.

At the same time Lynch made the decision to cut the Wrestling program, the current Athletics Director Drew Marrochello was also on Lynch’s staff as the Deputy Director of Athletics. As the Deputy Director of Athletics, he oversaw all of the daily operations, it’s 24 varsity sports and $25 million budget. In addition, he had direct oversight of the business office and coordinated all of the revenue generation for the department.

Uh, Brad, BU is NOT in the ACC. It’s in the Patriot League, where no men’s teams have scholarships – and where none of the women’s teams are close to fully funded.

Steve, between Colgate, Bucknell, Lehigh, American, etc there are men’s scholarships. Not to mention between Army and Navy there is no tuition cost, (rightfully so) but still relevant.

there are no scholarships at american… not since early 2000s

You are incorrect when it comes to the men’s programs. None of those programs have any athletic scholarships whatsoever. The women’s teams do have some scholarship money, however, but none are close to fully funded.

@SteveW BU swam Bucknell this past weekend and they confirmed that they receive swimming scholarships. Not sure where you are getting your facts. I would check on Lehigh as well.

What a disgrace. This will doom the men’s swim team.
BU does NOT have a football team, volleyball team, wrestling team or baseball team.
How long before ice hockey is the only varsity sport on campus?

its about revenue not about the sport…revenue generating sports will always survive i.e. hockey at BU. Football at Alabama. Basketball at Uconn etc.

I swam at BU and worked with the athlete department as a student athlete. I was told by one staff member that the hockey team does not break even. It has a lot of costs that are fixed and even with good attendance it does not pull in money like football or basketball (many of which also don’t make money but that’s another story). Like Joel Lin commented on, this is about not cutting other teams that the department can’t touch like hockey and women’s sports.