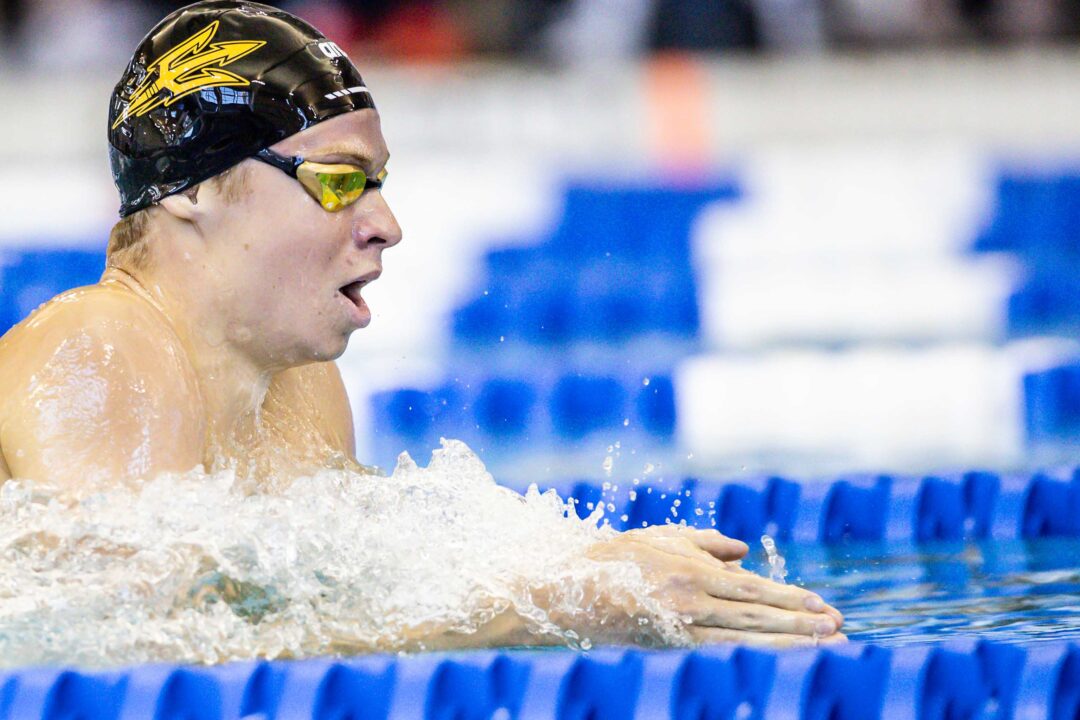 On Marchand, Bowman says that the French Phenom reminds him of Michael Phelps in 2003, giving his an anecdote from Leon's practice on Monday Current photo via Jack Spitser/Spitser Photography

On Saturday, we witnessed ASU’s Leon Marchand break the NCAA record in the 400 IM. Today, we spoke with ASU head coach Bob Bowman to get his thoughts on the matter. On Marchand, Bowman says that the French Phenom reminds him of Michael Phelps in 2003, giving his an anecdote from Leon’s practice on Monday. At the end of a 7500 threshold set, Leon looked so good that Bowman told him to let it rip and see what he could go on a 500 free at the end of the practice instead of swimming it threshold as written. Marchand swam 4:18, negative splitting it 2:10/2:08.

Bowman also explains why ASU suited up for its duals with Cal and Stanford, emphasizing that racing in technical suits is the best practice his athletes can get for this time in the season. Bowman also looks to the end of the season, saying last year the PAC-12 Championships were the ASU men’s real focus while this year, all eyes are on the NCAA Championships in March.

Does Bob likening Marchand to 03 Phelps (instead of 07 Phelps) imply he think Leon has much more time to drop? With the 200fly and 200breast being mutually exclusive in Paris 24, he’ll probably choose whichever they think he has a better shot at winning. But I struggle to think of what a 4rth event could be… I guess the only candidates are 200back and 200free, which seem like long shots for a medal at this point and they would risk tiring him out for golds later in the program.

Hmm I don’t think 04 Phelps would’ve taken a challenge (or outside medal possibility) for Thorpe/VDH over a likely gold if they were in conflict. I think he only did it because it was open on his schedule.

Likewise if Marchand was throwing down 2:05s in the breaststroke, I don’t think he’s throw away a shot at gold unless he thought he had a good chance to beat Milak

I think he was comparing them because they were both in incredible shape they could put up great times at any point during the season both in practice and in meets.

“I thought I was going slow”. How would you think that if you’re lapping people.

Bowman’s breakdown & takes on racing suited versus non suited was terrific. There are two competing philosophies on it & he seems to be on the middle ground (suited 2nd semester for NCAA, pros/internationals suited for pre-championship season rehearsal meets). Not sure the suits are a control variable versus volume & rest as factors: it’s a known known what the boost is to wearing a tech suit. But Bowman makes a good argument. Most important, he’s getting great results thus far & that speaks for itself.

With Marchand, Popovici and Milak, there is little room for Americans in Paris. Who could get an individual gold medal, if any?

and we could have some surprises on the 800
Hafnaoui and the Irish guy..

Not sure wiffen would be a surprise given that he had the fastest scm 1500 of the year by 4 secs and the fastest scm 800 by 2 secs. Will be interesting to see if he can convert to LCM, but no reason to think not, and he’s a young guy only getting better…

Hunter Armstrong has a shot in the 1 back. Dressel winning the 50 free is also most likely. Finke maybe a repeat in one of his titles too.

“most likely” for someone who isn’t currently swimming?

Marchand isn’t a lock for the 200 IM just yet, Shane Casas has a similar time

Lochte gonna have to rename his stroke clinics soon.

Shane didn’t do that in a world final, and Marchand loafed the first 50. Marchand is going 1:53 in Paris.

Any Word on dressel returning? 50 free who knows where guys like crooks liendo and caribe will be in 2024

And in the girls from Australia, Canada or the USA, who could get individual gold in Paris?

Those three cover IM, sprint-short distance free and fly. Funny how there’s more to swimming than what those three specialise in

Olympics are always a different ballgame. On paper it looks like you’d be right, but how many times have we seen an upset at the olympics.

Leon will probably be 22 come Paris
Phelps was 23 in Beijing
Spitz was 22 in Munich
He will be so fired up in his home country and he willbe well prepared.
He’s going to have to earn it, Foster and co will be prepared too.
May the best man win on that given day. Hope they will all remain healthy.

The Marchine was born May 2002 — so, yes, he’ll be a young 22 at the Paris Games.
He obviously will do both IMs and is the favorite. Serious question – what other events could he win in LCM?

He has a medal chance in either 200 fl or 200 br, but not both, since they are one after the other. Winning would be tough with Milak and ZSC around. France has outside chances to medal in the medley relay as well.

If Leon continues on this legendary trajectory where does that put Bowman on the all-time great coaches list?

If he gets an NCAA title and does well with Reagan and Marchand, probably top 3

This would be a good discussion on the SwimSwam breakdown (@Braden Keith Keith and @Coleman Hodges) — top 5 swim coaches of all time. Just off the top of my head, some contenders might be Eddie Reese, Bob Bowman, Doc Counsilman, Jon Urbanchek, Mark Schubert, Nort Thornton, David Marsh, Richard Quick, and Gregg Troy.

Would also be fun to hear a discussion about which (relatively) younger coaches might be able to sneak their way into the all-time great discussion (Durden, Meehan, Nesty, DeSorbo).

All time greats would have to include Peter Daland, Sherm Chavoor (Spitz’s coach and many others in 1960’s), George Haines. Also, international – Forbes Carlisle for one.

forbes is an aussy bra