Blueseventy Swim of the Week: Yale pulls off one of swimming’s elusive feats – the 1650 tie 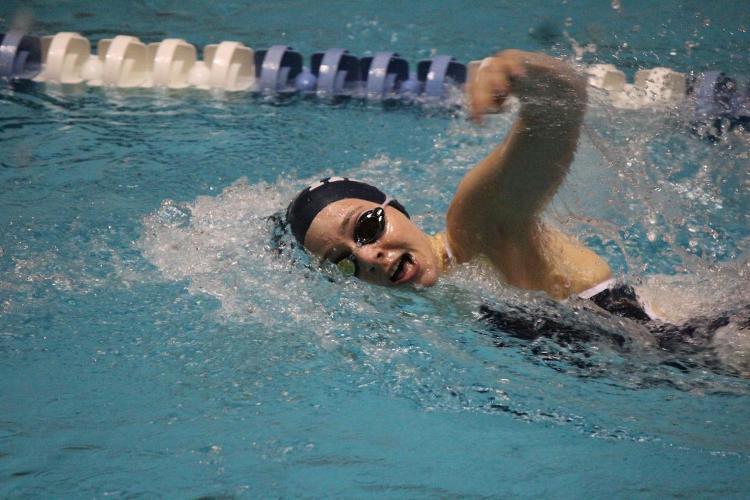 Yale's Cailley Silbert (pictured) and Eva Fabian battled for nearly 16 and a half minutes, ultimately tying for the Ivy League title in the 1650 freestyle. Archive photo via Yale Sports Publicity

An amazing week of college swimming saw maybe the best college conference Saturday of all-time, with conference races across the country coming down to the final day of swimming.

Saturday also saw one of the rarest feats in swimming: a tie for a conference championship – in the mile.

That’s impressive enough on its own, but the context of the race makes it even more exciting.

The Ivy League Women’s Swimming & Diving championships were drenched in drama all week long, with a back-and-forth three-way team battle running from the first event to the last.

After two days of action, Harvard led by just 9 over Yale, with Princeton only 10 back. The first event of day 3? The 1650 freestyle.

The final heat of that event saw three Harvard Crimson, three Yale Bulldogs and two Princeton Tigers in a slugfest of the meet’s top programs.

But it was Yale that rose to the occasion, with star junior Eva Fabian and breakout freshman Cailley Silbert going stroke for stroke in the front of the field.

Harvard’s Sherry Liu hung tough for a while, but the Bulldog duo started to drop her around the 1000-mark, leaving a showdown between two teammates.

Though the first and second place points were all-but-guaranteed by the 1300-mark, neither woman took her foot off the gas. Descending splits late into the race, Silbert suddenly took the lead for the first time at the 1600-turn.But Fabian fought back, outsplitting the freshman by exactly a tenth over the final 50, and the two hit the finish dead even.

One of the most memorable swims from a very dramatic Ivy League meet, the mile was a huge momentum and points boost to Yale, vaulting the Bulldogs into first place by 37 points over Harvard.

Unfortunately for Yale, the lead didn’t quite hold up – they barely beat back Harvard and Princeton event after event, heading into the final diving break with a 29-point lead, but the last two events saw that lead slip away as Princeton ultimately defended their Ivy League title.

Still, as much as high-level sports are about wins and losses, they’re also about the journey – the emotional highs and lows we go through on our way to the end result.

With that in mind, there was perhaps no higher high, and certainly no triumph so memorable, as that Yale mile 1-2.

You can read our full night 3 Ivy League coverage here.

Cailley just likes to share the glory. Last spring at NCSA Juniors she and Isabella Rongione tied for the win in the 1000. No joke.

Tied a team mate for the win in the 1500 at our club invitational one year. Kinda fun because I was way back (30m) at the 800. I decided eff it I’m winning this one…