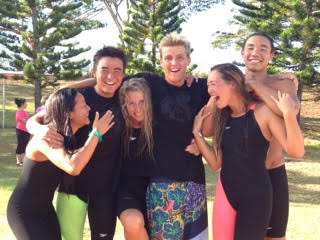 A bizarre occurrence highlighted the heat sheet at the 2015 Hawaiian Age Group Championships on the fourth day of competition as three different sets of siblings swam in the same lanes one heat apart. Current photo via Martha Petrides

A bizarre occurrence highlighted the heat sheet at the 2015 Hawaiian Age Group Championships on the fourth day of competition as three different sets of siblings swam in the same lanes one heat apart. 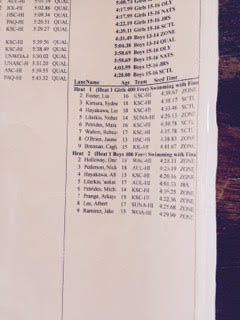 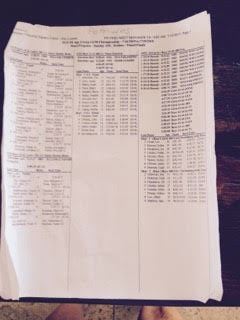 Spoiling the picture perfect moment was the fact that the three boys in the second heat didn’t finish in the exact same order as their sisters in the first heat.

In heat one, Nohea Lileikis touched first in 4:30.16. Lena Hayakawa finished second in 4:33.53, and Maia Petrides finished third in 4:34.23. Amazingly, because of their varying ages they each won their respective age group.

As for the boys, touching first was Nohea Lileikis in 4:05.47 followed by Petrides and Hayakawa in 4:20.74 and 4:21.90 respectively. Both Lileikis and Petrides won their respective age groups, and Hayakawa finished second in the boys 15-16 category.

Nice haha. That’s oddly satisfying. I remember like last summer or two summers ago all three Litherland triplets swam the 4 IM at junior nationals. Mic won the C final, Kevin won the B final, and then Jay had pulled the top seed coming out of prelims, but got beaten by gunner bentz. It was the goofiest thing, cause I’d never heard of them before. I was just sitting there watching the live feed going, hey that kid had the same last name as the other finals winner. And what, there’s another one in the A final… mind blown

I first saw the Litherlands at OT in 2012. I saw two of them walk by and thought… cool, twins… then 10 feet was the third… and after a quadruple take… my mind was blown.