Beyond The Lane Lines: ‘BRB, I Need To Go To Swim Practice’ 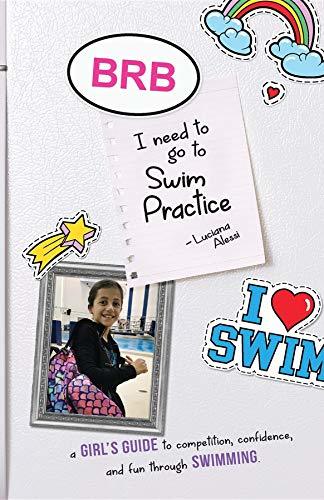 Baby news, generational Olympians and a 10-year-old swimming book author highlight the latest edition of 'Beyond the Lane Lines.' Current photo via Amazon.com

Just days after having been appointed Zimbabwe’s Minister of Sport, retired Olympian Kirsty Coventry announced that she and husband Tyrone Seward are expecting their first child. “We are going to be Parents in May 2019! What a week, what a blessing!,” is how the 35-year-old announced the news via social media. As  Zimbabwe’s most-decorated athlete, Coventry collected 7 Olympic medals during her long career, including back-to-back 200m backstroke gold medals at the 2004 and 2008 Games. She is also the current Chairperson of the IOC Athletes Commission.

Another retired Olympian has baby news, as open water athlete Keri-anne Payne of Great Britain announced the birth of her first child this week. The 30-year-old 10k Olympic silver medalist from Beijing and husband David Carry welcomed Josephine Jean Carry into the world on Tuesday, September 18th.  “She’s amazing and doing so well, we are totally besotted,” is how Payne described her new bundle of joy.

💜 Bring on the new adventure! @davidcarry and I are delighted to welcome little Josephine Jean Carry into the world on 18-09-18 she was a very healthy 8lbs 9oz. She’s amazing and doing so well, we are totally besotted 😍😍😍 pic.twitter.com/GPCzxY6Oj7

10-year-old Buffalo, New York native Lucy Alessi has taken her love for swimming to the written page. Alessi has published her first book entitled, “BRB I Need to go to Swim Practice: A girl’s guide to competition, confidence and fun through swimming”, a 47-page homage to her trials and triumphs as a member of two Western New York swim teams.

In what Alessi describes as ‘the greatest sport’, the young author says her book ‘helps kids develop good habits like listening to coaches, developing a skill, overcoming disappointment, developing confidence and having fun.’ The book is available for sale on Amazon.com.

After having been announced by the International Olympic Committee (IOC) as official cloud service provider for the 2020 Olympic Games, Chinese mega-company Alibaba has revealed a new cloud solution aimed at handling the intense demand of content production and delivery during the Games. Named Olympic Broadcasting Services (OBS) and launched through its cloud computing division, the system is designed to reduce time needed for broadcasters to set-up, test and commission their on-premise systems at the Games. (The Drum)

“We are very pleased that Alibaba Cloud has come up with this innovative and powerful approach to Olympic broadcasting. As the host broadcaster of the Olympic Games, we at OBS see ourselves as a leader in transforming the media industry,” said Yiannis Exarchos, Chief Cxecutive officer of OBS.

“Tokyo 2020 will be an opportunity for the International Olympic Committee to champion digital transformation in the media industry, as well as empowering broadcasters around the world with a cloud platform that delivers new possibilities for how the Games are enjoyed by fans around the world.” (The Drum)

As revelaed when the 2018 Youth Olympic Games roster for New Zealand was announced,  Buenos Aires-bound Gina Galloway is the granddaughter of 92-year old Ngaire Galloway, who is New Zealand’s oldest living Olympian. In 1948, Galloway was the only woman on the New Zealand Olympic Team, where she finished 11th in the 100 back in 1:19.0.

Young Galloway will carry on the backstroke tradition, something which the elder is looking forward to. “[Swimming’s] all changed a bit hasn’t it,” the Olympian stated. “The stroke itself has changed a lot. Gina’s lucky, she’s got killer instinct and she’s great competitor.”

32-year-old Aleksandra Gerasimenya of Belarus has welcomed a baby girl, her first child. The 3-time Olympic medalist and husband, swimmer Evegny Tsurkin, named the baby Sofia. Gerasimenya was the 2011 World Champion in the women’s 100m freestyle, tying Denmark’s Jeanette Ottesen. At the 2012 Olympics, the Belarusian came away with silvers in both the 50m and 100m freestyle, followed by a bronze in the 50m free at the 2016 Olympic Games in Rio.

Gerasimenya served a 2-year ban back in 2003 for having tested positive for norandrosterone.