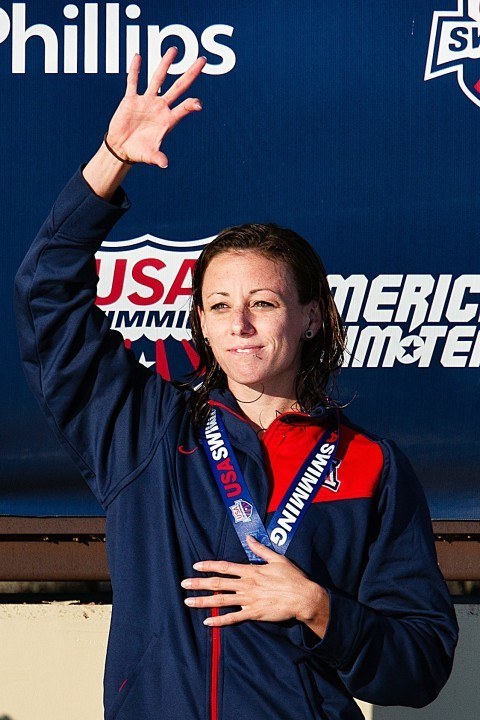 This past May, Ben Loorz was named head coach of the UNLV swimming & diving program following a year of interim coach Bobby... Archive photo via Tim Binning/TheSwimPictures.com

This past May, Ben Loorz was named head coach of the UNLV swimming & diving program following a year of interim coach Bobby Folan at the helm. Prior to Folan, Jim Reitz served as head coach for 35 years. Heading into his first season with UNLV, Loorz has named Lara Jackson, Patrick Ota, and Karissa Kruszewski to his coaching staff.

At least one of those names should be pretty familiar– Jackson, who swam for the University of Arizona, is one of the fastest sprint freestylers in American history. She is the former American record holder in both yards and long course meters– her SCY record was only just taken down this year after standing since 2009.

Ota comes to UNLV after serving as an assistant with Fresno State from 2011 to 2016, while Kruszewski was one of Loorz’s assistants at Cal State East Bay, where they both previously coached.

Read the full press release, courtesy of UNLV, below:

LAS VEGAS (UNLVRebels.com) – UNLV Swimming and Diving Head Coach Ben Loorz announced the newest coaching additions to the Rebel family on Wednesday, as Patrick Ota, Karissa Kruszewski and Lara Jackson will all be joining the swimming and diving program. Ota will serve as head assistant coach, while Kruszewski and Jackson will both be assistant coaches. They will join returning Head Diving Coach Derek Starks, in his fourth year with the Rebels, in making up Loorz’s first coaching staff as he took over at the helm of the program this past May.

Ota comes to UNLV from Fresno State, where he was the assistant coach and recruiting coordinator from 2011-16. While at Fresno State he helped the program post six individual school records, four relay school records, a Mountain West individual champion and an NCAA qualifier. Ota also coached a pair of Olympic Trial qualifiers during his five years with the Bulldogs.

His coaching career began in 2007 as the head assistant coach at Fresno Pacific, and oversaw a sprint group that featured nine individual national champions. The school won two national titles for the men and a runner-up finish for the women’s team during his four years with the school. During that time, he also served as the national coach for the Raisin Country Aquatics club team in Selma from 2008-10, before being promoted to head coach for 2010-11.

Ota swam collegiate at US Santa Barbara (2002-06), and was a seven-time Big West Champion while qualifying for the NCAA’s in the 100 back in 2006. That same year he was selected as the Big West Scholar-Athlete of the Year. Following his time at UCSB, Ota claimed the 50 and 100 back titles at the 2009 US Masters’ National Championships. He received his bachelor’s degree in film studies in 2006 from UCSB.

“Pat is one of the finest, most well-rounded young coaches in the Western U.S.,” said Loorz. “He is innovative, experienced at the highest level, and very familiar with the Mountain West and the UNLV program.  He is a proven coach, having trained athletes to the NCAA Championship meet and to U.S. Olympic Trials. Pat will be instrumental in effectively implementing our vision of being a consistent impact player at these meets.”

This will be Kruszewski’s second stint on a Loorz coaching staff, as she served as an assistant coach and recruiting coordinator for him at Cal State East Bay since May of 2015. She helped see the program record four new school records, a second-place finish at the PCSC Championships and record a total of 17 NCAA ‘B’ marks. Her roles with the team included coaching the long spring, mid-distance and IM groups, while also overseeing the team’s recruiting program.

Kruszewski was a three-year letterwinner for the University of Wisconsin, and was named to the Big Ten Academic All-Conference team all six semesters. She began her collegiate career at UC Irvine during the 2008-09 season and was named a scholar-athlete as well.  Kruszewski graduated from Wisconsin in 2013 with a bachelor’s degree in sociology.

“Karissa is passionate about coaching a university program that competes at the very highest level,” said Loorz. “She is a tireless recruiter, and very well-connected to what is going on in the swimming world.  I have worked with Karissa for over a year now and she continues to impress me with her drive and high expectations, both for herself and her athletes.”

Jackson was a two-time NCAA Individual Champion while swimming for Arizona from 2006-09. She earned 13 All-America honors in her four years and set eight NCAA, US Open and American records. Professional swimming followed, as she competed with Finis Inc for the next four years, during which she was the 2011 US National Champion in the 50 free, while also setting the Pan American record that same year. Most recently, she spent a year training with the Auburn University Pro Team while serving as a volunteer assistant coach for the Tigers during the 2014-15 season.

Jackson graduated from Arizona in 2011 with a bachelor’s degree in animal science.

“Lara is the best short-course American sprinter in history,“ said Loorz, as her American record in the 50 yard free stood for eight years until it was finally broken this past spring. “I have had the opportunity to work with Lara, and was immediately impressed with her keen technical mind and eye for detail. I am excited for our sprinters to be able to learn from her expertise. Her recent retirement from the professional ranks made this the perfect opportunity for her to enter the college coaching ranks.”

Starks is in his fourth year as diving coach for the Rebels.  “Of course we are pleased that Derek will remain on staff as the leader of our diving program,” said Loorz. “He is very involved with the diving community at multiple levels, and the success he is growing here in Las Vegas is grabbing attention nationwide.”

In the 2015 season, he coached Lucas James to three top-four finishes at the WAC Championships, including the conference title on the platform, which was the first conference title for the men’s team in any event since 1988. James would go on to place 14th at the NCAA Diving Zones, again one of the highest finishes in the past 28 years for the Rebels. The women meanwhile under Starks scored in three events at the MW Championships.