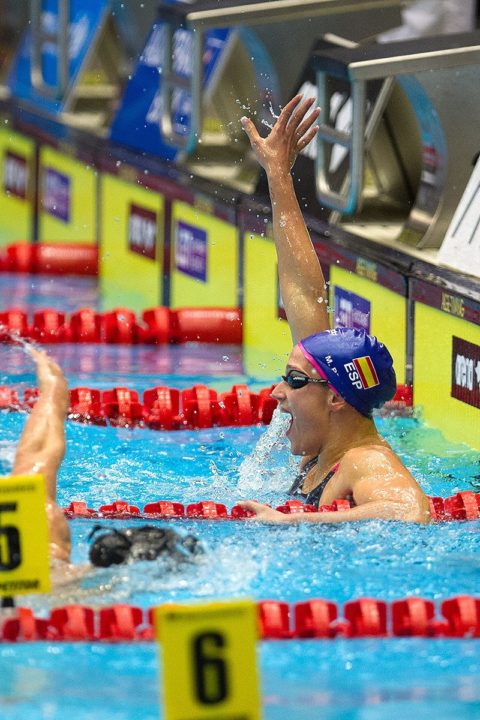 Mireia Belmonte posted the world fastest time in the 200 butterfly winning the event at the Spanish Championships in a time of 2:06.34... Current photo via courtesy of Jesper Nielsen | www.sttfoto.dk

Belmonte took on a beastly schedule at her nation’s Olympic Trials last weekend, a strategy which rendered her 4 Olympic A cuts.

Eduardo Solaeche-Gomez rocked a new Spanish National Record in the men’s 200m IM while competing on day 3 of his nation’s trials tonight.

Spain kicks off Trials season with their Open Nationals slated for this weekend, complete with a Belmonte-filled four days.

After being forced to miss both the 2015 Spanish Championships and 2015 World Championships Mireia Belmonte has returned to form putting up a strong performance on the first day of the Spanish National Championships in Barcelona. Belmonte, who is entered in the 200m butterfly, 200/400 IM and 400/800/1500m freestyle, took the women’s 200 butterfly in a time of 2:06.34, which places her atop of the world rankings.

Belmonte made her return to competition in October racing the 5 km at the Catalan Winter Cup. Before today she only showed up in the world’s top five in the 1500 freestyle after posting a 16:19.71 in December.

Belmonte also went on to win the women’s 800 freestyle posting a time of 8:27.94, which is under the FINA A standard of 8:33.97 and places her seventh in the world rankings. In a heart breaking swim Jimena Perez missed the A standard by one one-hundredths of a second finishing second in a time of 8:33.98.

Duane Da Rocha, who swum the 200 backstroke in London and won the event at the 2014 European Championships, miss the FINA A standard by four one-hundredths of a second touching in a time of 2:10.64.

The results of the men’s events on the first day of competition were extremely promising with four men qualifying for Rio, doubling the number of that represented Spain in 2012.

Although she did not qualify for Rio Fatima Gallardo set a new Spanish record in the women’s 50 freestyle posting a 25.43 beating the previous record of 25.49 set by Arceli Herraez in 2009.

Konrad Czerniak of Poland won the men’s 50 freestyle in a time of 21.95, which places him eighth in the world rankings.

Mireia looks better and better.
Cool.
I’m rooting for her to win the 200 fly gold in Rio.
She deserves an olympic gold.
It will be very hard with the young Chinese and the Japanese but she can do it.

Correction: Africa Zamorano Sanz was born in 1998 and her winning time today has been 2.09.96.