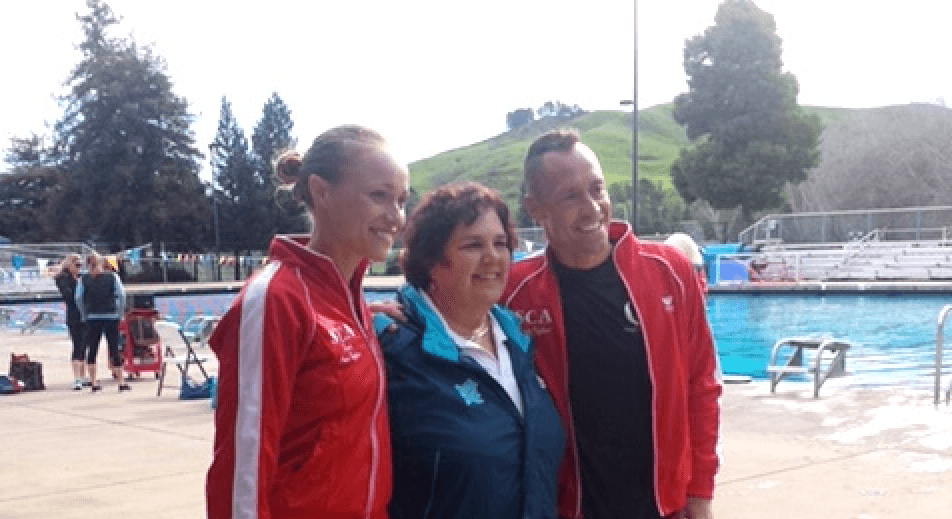 Bill May moved closer to history Tuesday as he advanced in his bid to compete at the 2015 FINA World Championships.

May, who once was barred from competing at the Olympics and other international events because of his gender, is an unofficial selection for the inaugural mixed duet at the World Championships in Kazan, Russia, this summer (July 24-Aug. 9).

May and 2008 Olympian Christina Jones took part in the first phase of USA Synchro’s Mixed Duet Trials in Moraga, Calif., and will participate in the second phase in Las Vegas later this year, when the mixed duet will be officially announced. Kristina Lum Underwood, a 2000 Olympian who was a four-time national duet champion with May, also will take part in phase two of the trials, which covers the free routine.

“Although it has been a while since I have competed, it felt very natural to be back in a competitive setting. We felt an incredibly warm and supportive welcome from the other athletes on the national team, coaches, officials, and USA Synchro as a whole,” May said.

“Kristina, Christina, and I are very fortunate to have incredible coaches that will drive us to be the best athletes we could possibly be and show the world that USA Synchro will be a powerhouse at the upcoming World Championships.”

May won 14 U.S. national championships and several international titles during his synchronized swimming career. A trailblazer in a predominantly all-woman sport, he became the first male to win a national title in the U.S. and was named USA Synchro’s Athlete of the Year in 1998 and 1999. He added numerous duet titles and won a silver medal with Kristina Lum at the Goodwill Games in 1998.

He is currently a synchronized-swimming performer in Cirque du Soleil’s “O” show on the Las Vegas Strip.

Jones, who also performs in Cirque du Soleil’s “O” show, competed at the 2008 Olympic Games in duet and team and represented the USA as a soloist for several years.

“Bill and I both had a very strong showing. I have to admit, I did get a bit nervous, but my nerves has always boosted my energy and helped me,” Jones said. “Bill, Kristina and I are all very excited to be back in the competitive world of synchronized swimming. I think that Bill and I were able to prove that we are working very hard. Everyone seemed very pleased with our performances, and we look forward to improving a little bit more each day.”

Lum Underwood is a synchronized swimmer and team captain in “Le Reve – The Dream,” an aquatic and aerial production show at Wynn Las Vegas. In addition to her four national duet titles with May, the pair won the silver medal at the 1998 Goodwill Games and several addition international titles. Lum Underwood, a member of the U.S. Synchronized Swimming Hall of Fame, was the soloist for the national team for two years.

USA Synchro organizes, participates in, and promotes a variety of competitive events each year. These events begin at the local level and continue in the following categories: Senior (15 & O), Junior (15-18), Junior Olympic (19 & U), Collegiate and Masters (20+).