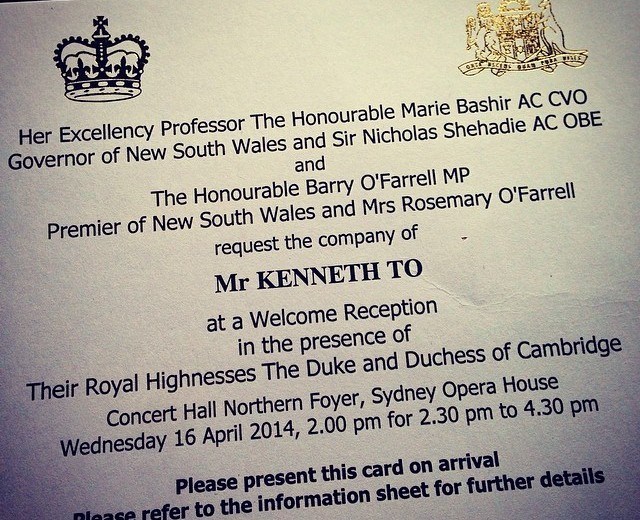 Alicia Coutts, Kenneth To, Bobby Hurley, Matthew Abood and Andrew Abood all attended a reception for the arrival of Prince William, Duchess Kate and their son Prince George...

When Prince William and Duchess Kate arrived in Sydney on Wednesday they attended a reception at the Opera House where they were greeted by a very select group of 361 guests, a group which included some of the countries top swimmers.

Multiple Olympic medalist Alicia Coutts, Kenneth To, Bobby Hurley, Matthew Abood and Andrew Abood were all in attendance, “It was an awesome experience to be invited to a function with them,” Hurley told SwimSwam.

“Unfortunately not all of us got to meet them. I saw Alicia having a long conversation with Prince William and Kenny spoke to Princess Kate for a few minutes about the 4 x 100 free relay in Glasgow! She said she will look out for him over there! Pretty cool….”

“It was pretty special,” To told SwimSwam.

“There were 20-30 distinguished guests who were scheduled to meet the royals, and after that they were free to walk around the area to meet more Australians for only about 20-30 minutes. Alicia and I were very lucky to have met them!”

Coutts shared a bit of her conversation with Prince William, telling The Telegraph, “I told him I’d been told I should sample Irn-Bru (a soft drink from Scotland). But he said that it’s over-rated and that I should try deep-fried Mars bars.”

In addition to the select number of people invited to the reception the royal couple was met by a crowd of 3,000 who gathered in front of the Opera House.

The royal couple along with their son, Prince George, will be spending 10-days touring Australia. The Governor of New South Wales, Marie Bashir, called their visit “historic and also joyful” event.