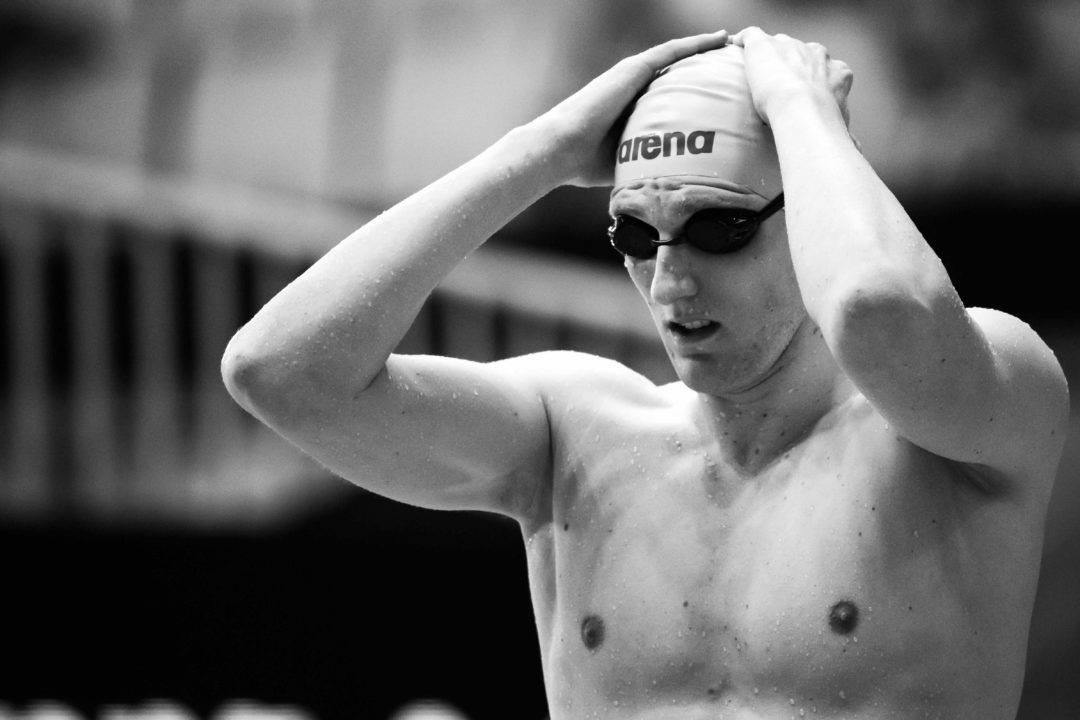 The Australian Olympic Committee is fighting to convince its athletes that podiums at the Tokyo 2020 Olympic Games are not the riight place for protests. Archive photo via Mike Lewis/Ola Vista Photography

The Australian Olympic Committee (AOC) has warned its athletes against using Olympic podiums as a location for protests in Tokyo next year.

According to the Daily Telegraph, in spite of Mack Horton receiving support from Swimming Australia to continue his podium protests, the AOC has taken a different tact.

“The Australian Olympic Committee respects the rights of athletes to hold convictions and to express those convictions, AOC CEO Matt Carroll said. “But the medal podium at the Olympic Games is not the place to express personal views on any matter regardless of their merit. The joy and significance of that moment should be respected by all and not be denied to any athlete. There are other forums where views can be expressed without negatively impacting on fellow athletes.”

In the past, the Court of Arbitration for Sport upheld a decision by the IOC to strip a medal from Swedish wrestler Ara Abrahamian in 2008 after protesting a refereeing decision.

The Telegraph also reports that Mack Horton was short-listed to become one of Coca Cola’s national ambassadors for the Tokyo 2020 Olympic Games. The Telegraph’s headline and editorialization appear to connect Coca Cola’s decision to choose another athlete (wheelchair basketball and tennis star Dylan Alcott) over Horton to his podium protest, but they never mention any source on connecting the two. The Telegraph did report that Coca-Cola says that not selecting Horton was unrelated to his podium protests.

Sun is being featured in Coca-Cola’s Olympic campaign in China.

Australian swimmer Mack Horton abstained from podium festivities and refused to take photos with Sun Yang when he took second to the Chinese star in the 400 free at Worlds. Sun is currently facing a Court of Arbitration for Sport hearing in September to decide his fate after a vial of his blood was allegedly intentionally smashed in the presence of a drug tester in September 2018. While Horton and Sun have a history that goes back to the Rio Olympics, when Horton called Sun a “drug cheat,” Great Britain’s Duncan Scott (who does not have such a history), followed suit, also refusing to shake hands and take pictures with Sun on the 200 free podium.

Maybe the AOC should warn WADA, CAS, and the Olympic Committee not to allow cheats into the Olympics, instead of victim blaming. I simply don’t understand how it is possible to allow cheats Efimova and Yang to compete. Watch Icarus.

‘Every sport/doping body is wrong and I, a clueless nobody in the internet, should decide who is a cheater and who gets to compete’

I think 2 positive drug tests by an official testing body and smashing blood vials with a hammer isn’t exactly “clueless”. Drug cheating is not a victimless crime. Do you not understand the hours of sacrifice competitive swimmers make to achieve the highest results. I can’t imagine the sick feeling of losing a World or Olympic Championship to a drug cheat.

What was the 2nd positive test?

The comment was about Efimova and Yang. Efimova was caught twice (2014 for DHEA, 2016 6x positive for Meldonium),

There was no 2nd positive test that we know of.

Efimova was the reference for two positive drug tests.

You need to read into details of the investigation on blood smashing. Just look into Wikipedia for details. Yang was cleared by FINA over the incident and he competed in a fair manner. There is no proof that Yang cheated. Media in “Anglo sphere” don’t report the details, and most people live in the “Anglo bubble” have no idea what they are talking about.

13
-3
Reply
remel can do anything
Reply to  dsp_man

FINA is not everything

Apparently one of the tests were not by official testing body

No, Mack Horton should decide who is a cheat. He is a hero and representative of anyone who live in an “anglo bubble” with exposure to only anglo media.

“The Telegraph did report that Coca-Cola says that not selecting Horton was unrelated to his podium protests.”

“Sun is being featured in Coca-Cola’s Olympic campaign in China.”

I understand telling them to avoid political protests as that can be a very slippery slope but I’m disappointed that they would tell athletes to avoid standing up for clean sport from a platform where their message could be heard loud and clear. Let’s focus on keeping cheaters out of Tokyo instead.

I agree. Standing up for clean sport is important in all ways. I think it gets slippery, as you rightly mention, because once you open that platform for political protest, what is the limit to what someone can do with that platform and how does someone set the limit? Why only clean sport, and not better distribution of FINA prize money, or other hot button mainstream political issues, the US presidency, animal rights, LGBTQ rights, etc. One swimmer protests for clean sport, the other against systemic racism or Trump’s presidency. In my view, it’s best to keep the protests away from that platform.

Standing up for drug-free sport is “political protest”??

The key point is standing up for drug-free for whom? Is it just against Sun or all of other athletes? If so they nobody would shake hands with Shayna Jack, who’s also from Australia and tested positive? Also is the podium really the best place to do a protest? It’s very selfish and a pure racism in the name of free speech. Even Sun had a positive result before, he did not in that very game, and everyone needs to respect the game.

Good point. It is no more a political protest than a Formula 1 driver protesting the use of banned engine technology in his opponents’ cars.

And if those protesting swimmers have ever participated in their national teams’ altitude training camps, the EPO they bludgeoned from of their kidneys makes their protests seem hypocritical. EPO is EPO, whether synthetic or from being choked in their sleep in an oxygen starved dorm.

But if they have never done altitude, they deserve our total support to protest, at least via the right channels.