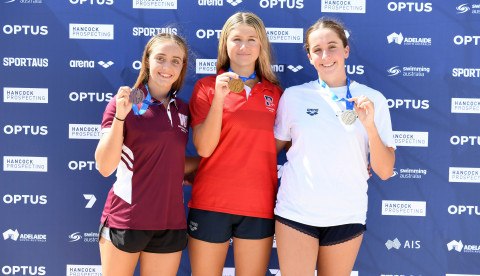 Swimming Australia is pleased to announce its four-athlete Junior Development team that will travel to the French Open Water Nationals in Brive la Gaillarde in May this year. Current photo via Swimming Australia

Swimming Australia is pleased to announce its four-athlete Junior Development team that will travel to the French Open Water Nationals in Brive la Gaillarde in May this year.

Following the conclusion of the 2019 Australian Open Water Swimming Championships in Adelaide, the team will consist of one boy and girl from the 18-19 year age group as well as the 16-17 year age category.

As the winner of the Boy’s 19-year-old 10km race, Perth City’s Reilly Kennedy has been named in the squad, while the gold medalist from the Boy’s 16-year-old 7.5km event, Miami’s Ruben Rees, also earned a spot on the team.

Open Water Performance Manager Greg Shaw said this was a great opportunity for our young swimmers to race against world-class athletes.

“The French are arguably the best open water swimmers in the world having won multiple medals at the Olympics, World Championships and World Junior Championships in the last four years,” Shaw said.

“These athletes will have the chance to train and race in France against some of the best which will be a wonderful learning opportunity and stepping stone for them as they look to build toward Paris in 2024.”

Meanwhile, Perth City’s Matt McGee and Miami’s Raelene Ryan have been selected as the coaches to accompany the team to France.

As confirmed on day one of the Championships, the top four placegetters in the Men’s 10km race – Nick Sloman (Noosa), Kai Edwards (TSS Aquatics), Hayden Cotter (Lawnton) and Bailey Armstrong (Kawana Waters – earned themselves a spot on the team that will travel to Doha for the first leg of the FINA Marathon Swim World Series. This race forms part of the qualification process for the FINA World Championships in Korea later this year.