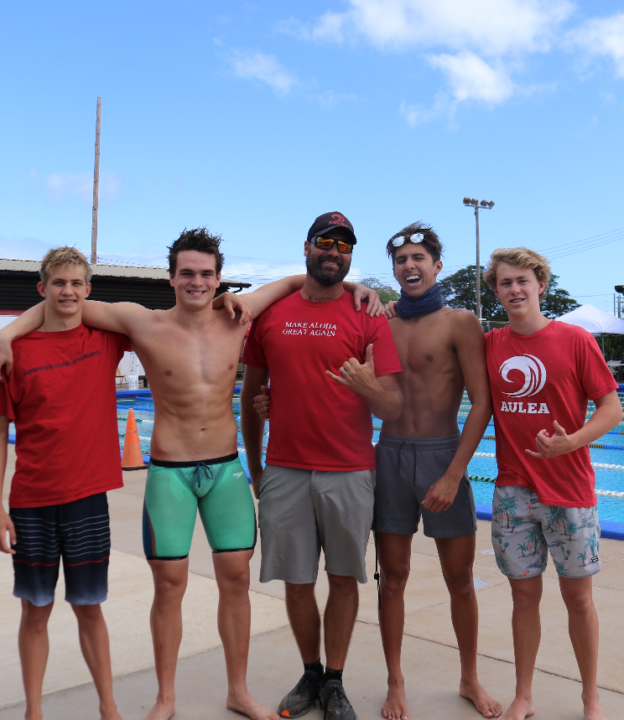 The boys 400 Medley Relay from Aulea set a new Hawaii record in the 17-18 age group. The team of Zach West, Tom Caps, James Lyon, and Jon Reiter swam to a time of 3:54.76. The quartet took almost 10 seconds off the previous record of 4:04.12 set by KSC in 2018. That relay consisted of Allen Hayakawa, Jaek Horner, Kanoa Sawai, and Noah Carlson.

Besides the new state record, Caps had another reason to celebrate. Coming into the meet, his best time in the 100 breaststroke was at 1:03.35, just .06 from the Olympic Trials Wave I cut. In the individual event he earned his first trials cut, swimming a 1:03.17 and breaking the 17-18 Hawaiian age group record in the process. Caps also dropped five seconds in the 200 breaststroke, posting a new best of 2:21.06 putting him just over three seconds from the Wave I cut of 2:17.89.

West had a significant swim in the 100 butterfly. Prior to the meet his best long course time was 1:00.15. He swam a 51.15 in the short course yards 100 fly a month ago at the ISCA Senior Meet indicating. This weekend he dropped well over two seconds to go 57.31.

The results overall for Aulea are positive as they have been out of their home pool since March of last year. During that time they have been using a host of other facilities and just returned to their home pool last week. Aulea swimmers Reiter and Alana Barthel will be looking to drop time next month to join Caps in Omaha. Reiter swam a 1:03.57 in the 100 breaststroke in March and needs to drop just .28 seconds for the Wave I cut. Barthel’s best chance is in the 100 backstroke. Her best time of 1:04.22 is less than two seconds off the Wave I cut of 1:02.69.

Yo, that Tom Caps guy has some big ass quads 👀

You can see his quad striations even through the suit 🥶

get the young man on a bike and see what he can do.

They do be kind of aesthetic, doe 💪🏼