“Athleticism” Is the New Buzz-Word in Swimming 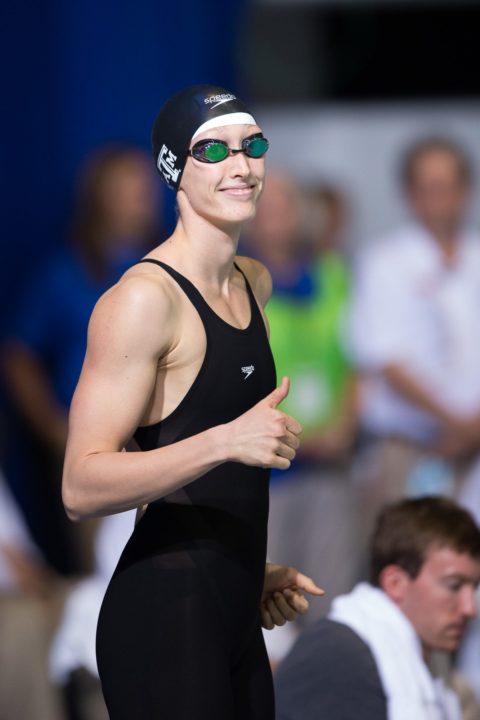 Swimming: welcome to the jungle.

It’s time to add a new word to our swimming vocabulary: “athleticism”.

No, we’re not trying to start some debate one “who is a better athlete: Michael Phelps or Lebron James.” We don’t mean that sort of athleticism.

It’s guaranteed to be one of the first 5 words out of the mouth of any college football or basketball recruiter or recruiting analyst.

And more-and-more, this is the kind of athleticism that’s becoming a primary subject of conversation in swimming. My guess is that this is partly caused by a generation growing up watching ESPN cover college football and basketball recruiting – the word feels more easily eloquated by the under-40 coaching crowd that those ESPN shows are geared toward.

Sure, swim coaches have been using this term for years. They just use it in sort of hushed tones, almost as a back-handed compliment, for the most part. “Yeah, that kid’s an athlete, he can swim a 50 free in 22 seconds cold-turkey.”

I’m hearing this come from more-and-more swim coaches, though, when talking about this new generation of super swimmers who could probably go pro in something else. Michael Andrew, who one season was perfect on extra points for his youth football team; Jackson Miller, who was a quarterback at his high school but is beginning his freshman year at Indiana as a sprint freestyler; Tim Duncan, who was on a path to the Olympics before diverting to become one of the greatest players in NBA history.

Until this latest spark of “athleticism” conversation, swimming was going to a dark place. It had become a spot where people inside of the sport didn’t see physical abilities as any concern for their swimming. Everything had become so focused on the mental part of the sport. “Swimmers are smarter,” “I’d like to see you swim 27 x 200 butterfly,” “If you think that a 10,000 meter practice is too hard, you’re obviously just not mentally tough enough to be a good swimmer.” The motto of the entire swimming community is “hard work beats talent when talent doesn’t work hard,” but when I hear it, it’s said with this tone as though “hard work will beat talent even if talent works hard,” which doesn’t make sense. These are the sorts of ideals that swimmers build their identities on.

Instead, we’re now seeing more kids like Dressel, who step up on the blocks in a practice and go 19.0 – faster than any high school swimmer ever has done. Kids like Allie Szekely, who runs cross country in the fall, and doesn’t have to dedicate 12 months a year to swimming to be the best ever. Swimmers like Breeja Larson, who pick up swimming, and three years later are the best in the world. Swimmers like Austin Temple, who dropped 6 seconds in his 100 long course meter breaststroke in a year to go 1:01.9 in long course before his senior year: an astonishing mark.  That’s “athleticism.”

And if in your head you just got the urge to leave an angry comment about how hard those kids work, then you, my friend, are who I’m talking to.

There are certainly athletes in swimming, and there has been for a long time. My impression (but maybe not your impression) is that we’ve always been afraid to talk about said “athleticism”. Until now. It comes up more-and-more in conversations that I have with coaches, about how swimming is luck that so-and-so didn’t play another sport, or that someone is just a “freak athlete” and the “sky is the limit”.

That doesn’t mean that the hard-workers have to go away. The swimmers who jerk themselves up with mental toughness have to go away. There’s always a chance for a moderately athletic swimmer to overtake a really athletic swimmer by working slightly harder. There’s no “getting lucky” or “calling the right play” in swimming, for the most part, and that’s not going to change any time soon.

It’s time for all of us to simply become comfortable with athleticism, however. Recognize that every swimmer doesn’t benefit from doing more yardage; every swimmer won’t benefit from tests of mental toughness; and that our sport is undergoing a drastic transformation. We can’t be afraid of the lack of control we have over natural athleticism. It’s a concept I’ve struggled with – coaching at a school where playing multiple sports is strongly encouraged, and having to realize that the kids coming in off of the football field in November can compete with the kids who got in the water in September.

And it’s worked. In my coaching, I’m no longer fighting the club teams for the attention of my athletes; instead, I’m cooperating with the volleyball coaches, and the cross country coaches, and my team is bigger and better than it’s ever been.

The future is here, and the good news is that it’s about to be a fun ride.

Couldn’t help but think “well yeah, obviously” throughout this whole thing. Kinda baffling that at some point this wasn’t just self-evident. (Because, I mean, at its core this article is “kids who are good at sports – also good at other sports.”)

And Michael Andrew kicking a bunch of extra points as a sign of athleticism? Get outta here with that weak sh*t.

not sure what this article is about. Another smack at swimming coaches who approach swimming differently from the author? Swimming coaches have talked openly– not in hushed tones– for years about talented, athletic kids.

These are the same people that think that weight training for swimmers is stupid, or breaking the body completely into overtraining in the hopes that two weeks of rest will make everything better.

As much as a lot of swimming people don’t want to admit it, excelling in this sport takes the same general physical attributes as any other competitive sport – its just manifested in different ways. Much like an Olympic weightlifter is build differently from an NBA player is built differently from a track sprinter, however they all display speed, strength and skill.