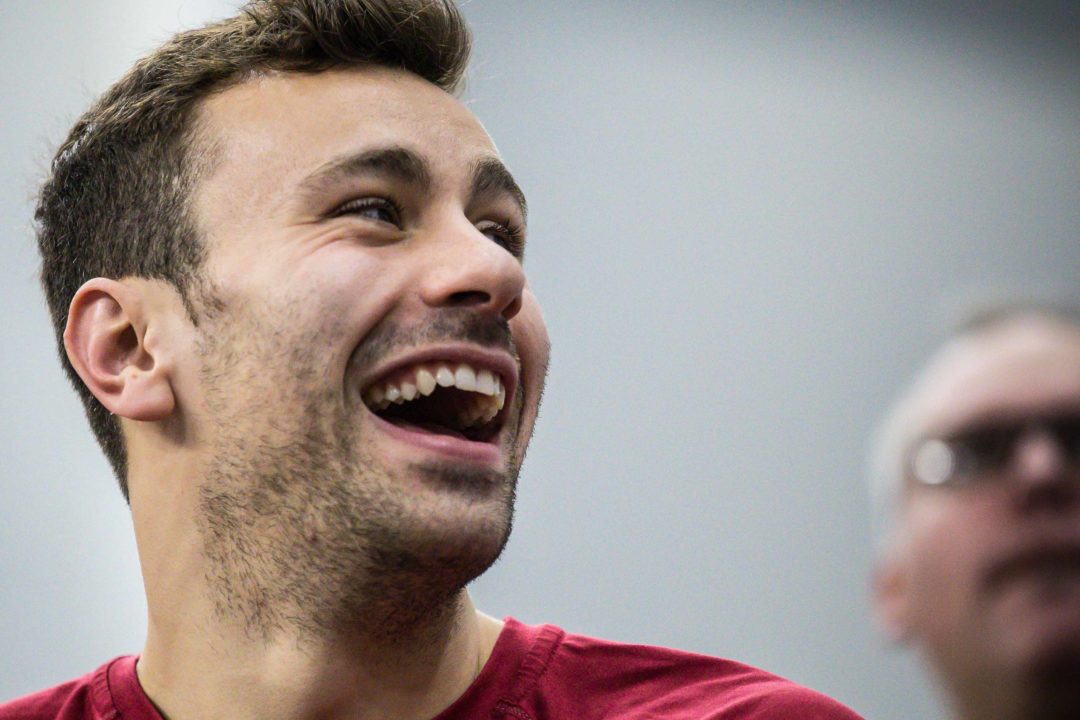 In addition to the main action at today's college tri-meet , Indiana alumni Zach Apple and Blake Pieroni exhibitioned a 200 free with a unique twist. Current photo via Jack Spitser/Spitser Photography

If you promise to do something kinda crazy, they will click…

Earlier this week, Indiana alumni and U.S. National Teams Zach Apple and Blake Pieroni made an effort to garner more followers on the Indiana Swimming & Diving Instagram by promising to attempt to swim the first half of a 200 free (LCM) in under 50 seconds if the Instagram account got 18,000 followers by Friday.

Swimmers are by nature something of a masochistic bunch, and apparently the promise of watching other swimmers suffer was too good to pass up. IU’s Instagram account had less than 15,000 followers earlier this week, but now has over 21,000 followers, presumably due to the duo’s promise of self-inflicted pain.

As men of their word, Apple and Pieroni dutifully exhibitioned the 200 free at the tri-meet Indiana is hosting this weekend, and you can see the results below.

According to IU’s post, Pieroni flipped in 49.8 and Apple in 49.9. For a little comparison, Paul Biedermann went out in 50.12 when he set the 200 free world record in 2009. Bidermann, of course, was wearing won the “super suits” that were eventually banned, and split 51.88 coming back, giving him an overall time of 1:42.00, a time that no one has come within a second of since.

Apple and Pieroni, sans supersuits, each had a much rougher go of it on their second 100. The video of that back half is almost exactly a minute long, and misses a few seconds at the beginning and end of the lap, but IU’s Instagram mentioned in the comments on their post that Apple went 1:06.1 on the back half and Pieroni went 1:08.1, giving Apple about a 1:56.0 and Pieroni a 1:57.9.

. Obviously that’s nowhere near either’s best times (1:45.93 for Pieroni and 1:46.56 for Apple), but reasonably close enough to each swimmer’s in-season times that it’s clear the second half was more than just an easy cool down.

The madlads actually did it.

49s to the feet is a super impressive split, only 2 guys swam 49s in the actual 100 free in Greensboro last night. Kudos for making good on the bet

he is darn good at it

This is just painful 😖