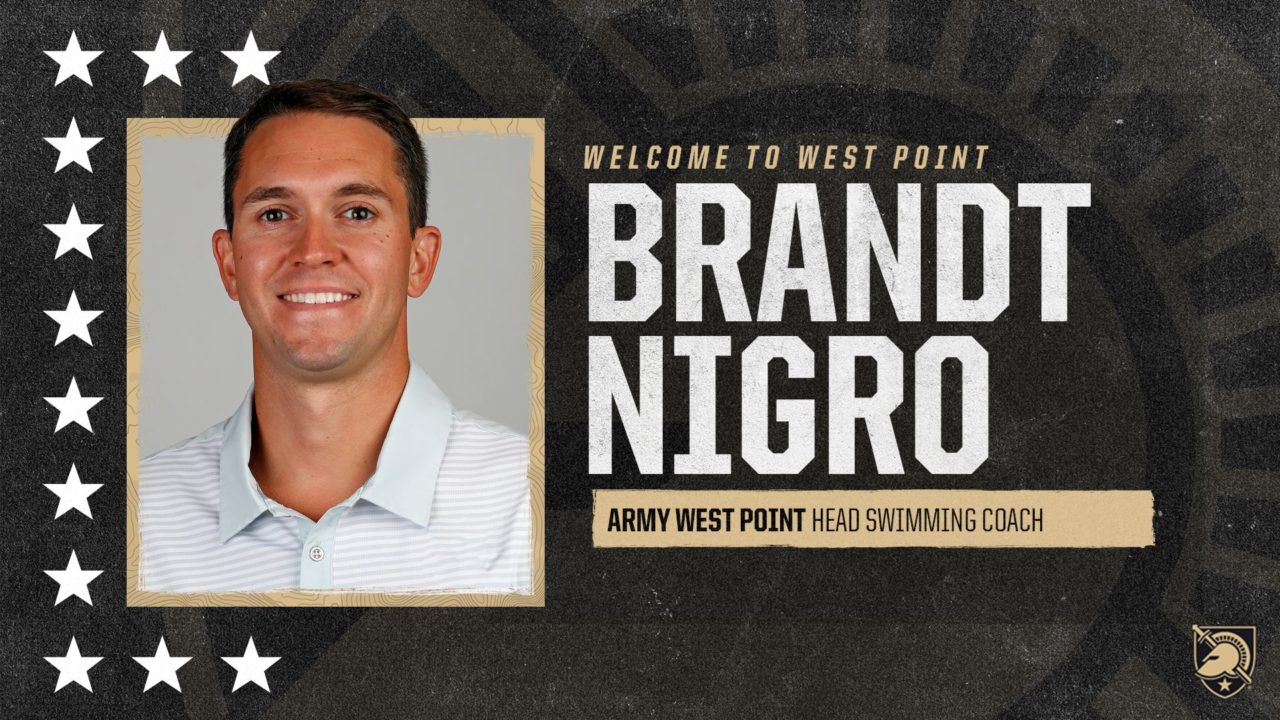 The Connecticut native Brandt also spent time at Marshall, UMBC and Wesleyan in various coaching capacities prior to his latest stint at NC State. Stock photo via West Point Athletics

NC State assistant of two years Brandt Nigro will take over at the helm of the Army West Point men’s and women’s swimming programs, the school announced Wednesday.

Brandt replaces former head coach Mickey Wender, who stepped down after 13 years in June. Last season, Wender led the Black Knights to team runner-up finishes for both the men’s and women’s programs at the 2019 Patriot League Championships and ECAC Championships. He was recently hired as head swim and triathlon coach at Colorado Mesa University.

“We are thrilled to have Brandt taking over our swimming programs,” Director of Athletics Mike Buddie said. “Everyone we spoke to about Brandt had great things to say about his work ethic, character and that he is a rising star in the sport. I am looking forward to following our cadet-athletes’ success under his leadership.”

While in Raleigh, Nigro primarily coached the sprint free and stroke groups, as well as assisted in recruiting, according to the announcement. The Wolfpack men won fifth-straight ACC title in 2019 and the women made it an NC State sweep on the year with their own championship. With Nigro on board, the men finished fourth at the NCAA Championships in 2018 and 2019, and the women took seventh in 2019 and 18th in 2018.

Prior to NC State, Brandt served as an assistant at Marshall and UMBC. At Marshall, Brandt coached Sirena Rowe to the 2017 NCAA Championships and 2017 Conference USA Freshman of the Year honors; she was the first Marshall swimmer to qualify for the NCAA Championships since 2005, and then transferred to NC State prior to Nigro’s hiring. Nigro helped guide the UMBC men’s and women’s teams to back-to-back conference championships in his two seasons with the program and was a part of the 2015-16 CCSA Men’s Coaching Staff of the Year and the 2014-15 America East Women’s Coaching Staff of the Year.

While in Baltimore, Nigro also served as the head senior coach of the Retriever Aquatic Club. The Bristol, Connecticut began his collegiate coaching career as a volunteer assistant at Wesleyan University.

Nigro himself swam for the College of Charleston and was a member of the 2003 Southern States Conference Championship team. He graduated in 2005 with a B.A. in Political Science, then got his M.S. and Sixth-Year Certificate in school psychology from the University of Hartford in 2009. While still in Connecticut, he worked as a state and nationally-certified school psychologist.

Down votes by UNC fans.

Nah, upvotes by UNC fans happy to have another good coach leave Raleigh. Hire them all!

NC State is becoming the swimming version of Alabama football. All of the assistant coaches are getting picked up elsewhere. I wonder when Bobby will be convinced to leave.

As an NC State fan, I’m hoping the university is taking care of Guntoro! He’s been with the program from the beginning and doing a good job with the sprinters. We need him to stay in town alongside coach Holloway!

Bobby’s wife is about to have their first baby so unless the unlikely N.C. State athletic apartment under a new AD in Boo is ponying up some kind of dollars they probably don’t have for an assistant swimming coach (ala the swim equivalent of Clemson football) then Bobby has to entertain the offers to more than double his salary and take care of his family. As Braden always makes clear, family comes first. Head swimming coach trumps assistant swimming coach 99% of the time…unless it is Stanford where the 10x cost of living versus Raleigh keeps Braden and anyone not from Hawaii away.

Yeah Brandt! Awesome coach, awesome guy. He cares a lot about his swimmers and is truly one of a kind. West Point is lucky to have him