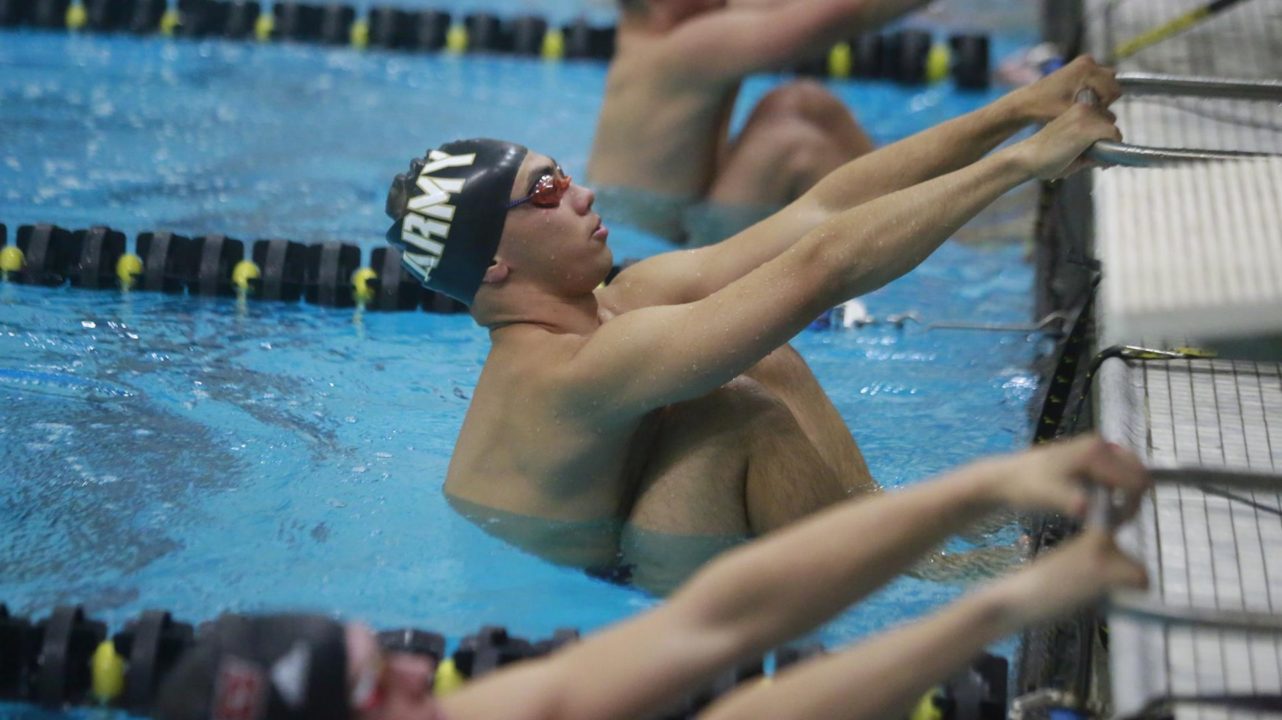 Army vs. Columbia (men only)

WEST POINT, N.Y. – Thanks to strong performances across the board, the Army West Point swimming & diving team secured a 174-126 win over Columbia on Friday night at Crandall Pool.

The Cadets built their lead early in the night, posting first-place finishes in four of the opening five events. After claiming back-to-back victories in the 200 Medley Relay and 1000 Free, the trio of Tanner Falls, Sean Dwyer and George Glover VII boosted Army’s advantage with a sweep of the 200 Free.

Army and Columbia traded wins over the next few events, with Evan Zhang coming up with a dominant victory in the 100 Breast after out-touching the second-place Lion by 1.69 seconds.

The Black Knights then used back-to-back first-place finishes to re-distance themselves from their visitors, as Owen Harlow paced the field in the 50 Free and Falls added his second victory of the night in the 100 Free while additionally helping Harlow and William Rankin sweep the event.

On the boards, the Black Knights were led by Daniel Alaimo, who captured second-place in both the 1- and 3-meter dives. He out-scored the third place Lion by nearly 20 points on each board.

Down the stretch, Army took four of the final six events to extend its margin of victory. After Zhang and Evan Yoo grabbed the first two spots in the 200 Breast, Tansill added his second win of the night in the 500 Free. The Cadets then finished the meet in dominant fashion, sweeping the last individual event of the night thanks to Kevin Lin, Yoo and Sam Wesley before taking home the 400 Free Relay.

Coach’s Corner
“We talked all week about this meet and the level of competition Columbia would bring with them both in the pool and on the boards. We knew they’ve dominated the rivalry over the last few meetings and that this meet was a big opportunity for us. Very proud of our men tonight, this was our most consistent meet from start to finish. We’ve struggled over the years to jump on top of teams from the opening relay but tonight that relay got the job done and set the tone. We had many in-season bests and our race details were much improved from last week. Tomorrow we are back to training and are going to get after it in practice… Only three and a half weeks to conference and there’s still work to be done.” – Head Coach Brandt Nigro

“We haven’t been that hyped in a long time. We came in, we knew that they were going to be tough to beat and it feels really good.” – Freshman Owen Harlow #GoArmy 🇺🇸 pic.twitter.com/83J01eEUXf

What’s Next
Army will now prepare to take on Lehigh in a Patriot League clash on Friday, Jan. 28. The meet against the Mountain Hawks, which is set for a 5 p.m. start, will serve as the program’s Firstie night. Nigro and his staff will honor the 11-member senior class as part of the night’s festivities.

“Jonathan returned today in absolute top form,” Head Dive Coach Scott Donie said in recognition of the feat. “His consistent hard work and attention to detail is quite evident in these performances. All the men should be very proud and we are looking forward to competing again, tomorrow, in our home pool.”