Arkansas Wins Against Kansas in Last Dual Meet of the Season 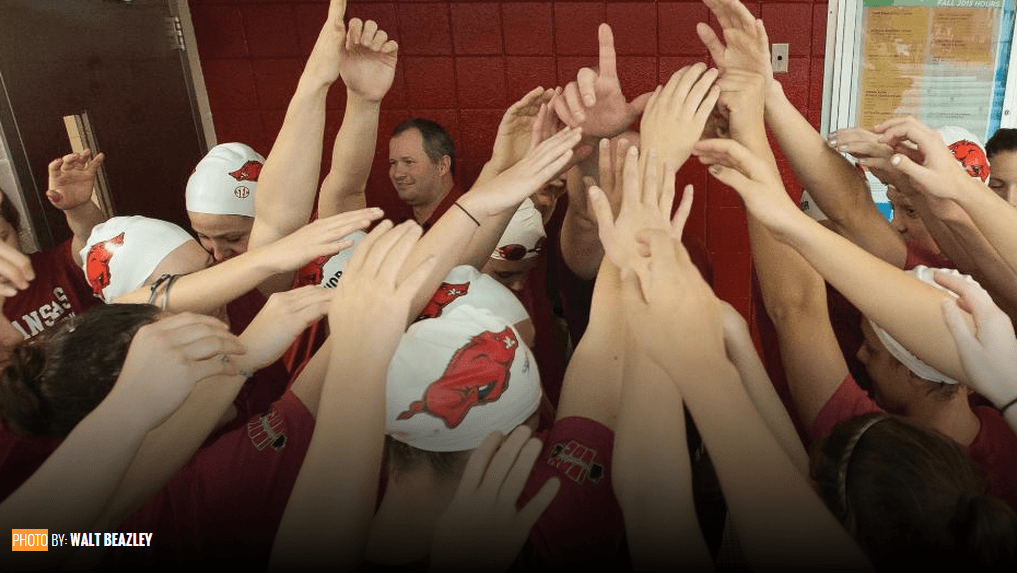 Arkansas closed out the regular season with their 10th win in a row against Kansas. Archive photo via Walt Beazley

The Navy women’s swimming and diving team posted wins in 12 of 15 events to defeat Richmond, 152-113, Friday afternoon at Lejeune Hall in Annapolis.

Arkansas cruised past Kansas in the Razorbacks’ last meet of the regular season, extending their win streak against the Jayhawks to 10. The Razorbacks were behind going into the first break, but won 9 out of the last 10 events to extend to a 60 point lead by the end of the meet.

A pair of Arkansas distance swimmers, Ayumi Macias and Peyton Palsha, were in a tight race for the entire 1000, with Palsha remaining within a half second ahead of Macias for most of the race until the last 50, when Macias outsplit Palsha 28.75 to 29.41. Macias finished in 10:09.27, while Palsha touched in 10:09.33.

Nicole (Aimee) Gillis swept the diving events, posting scores of 312.23 and 353.93 on the 1 and 3 meter respectively to win by a combined 128.56 points between both events. Gillis is ranked 6th and 4th in SEC the 1 meter and 3 meter respecitively.

FAYETTEVILLE, Ark. – Winning nine of the last 10 events of Friday night’s meet against Kansas, the Arkansas swimming and diving team defeated the Jayhawks 180-120 to extend its winning streak over Kansas to 10 straight meetings.

After recording a second-place finish in the 200 medley relay to start the night’s meet, Arkansas recorded its first event win in the first individual event, as sophomore Ayumi Macias claimed the 1000 freestyle title, touching in 10:09.27, followed by freshman Peyton Palsha, who touched second in 10:09.33.

In the 200 free, junior Annah Carney was Arkansas’ only podium finish in the event with a third-place showing in 1:52.77. Arkansas followed that performance with two podium finishes in the 100 backstroke, as senior Chloe Hannam finished second in 56.96 and freshman Michaela Degnan was third in 57.66.

Junior Madison Strathman claimed the second event win for Arkansas, as she touched in 1:03.43 in the 100 breaststroke, while junior Sydney Angell finished third in 1:05.87.

The Razorbacks would win each of the next seven events to extend their lead to 152-112.

On the boards, junior Nicole Gillis claimed both titles on the one-meter and three-meter, including setting a personal-best on the 3m with a score of 353.93, outscoring her competition by 85.58 points. On the one-meter, she scored a 312.23, outscoring the field by 42.98 points.

The Razorbacks claimed their fifth straight event win with a victory by Hannam in the 200 back in 1:59.46. Strathman would continue Arkansas’ streak with a win in the 200 breast in a time of 2:17.31, as Angell recorded a podium finish with a third-place showing in 2:19.96.

As the regular season comes to a close, the Razorbacks will turn their attention to the SEC Championships that will take place in College Station, Texas, from February 13 to February 17.

LAWRENCE, Kan. – A strong start Friday night inside Robinson Natatorium propelled the Kansas swimming and diving team to a strong finish, but it wasn’t enough, as the Jayhawks fell to Arkansas, 180-120, in dual-meet fashion.

Having won just one event a year ago in Fayetteville, Kansas showed a renewed spirit winning four of the first eight events, swimming even with Arkansas to the first break.

That fast start pushed the Jayhawks to their strongest finish against the Razorbacks since 2011, when they finished within 40 points, 170-130.

“We swam better than our expectations today,” junior Haley Bishop said. “It was a real confidence booster. We are further along right now than we were at this point last year, and it will help us along as we swim toward the Big 12 Championships.”

Kansas claimed first in the 200-yard medley relay to ignite that fast start. The foursome of freshman Manon Manning, sophomore Haley Downey, Bishop and freshman Lauryn Parrish posted the team’s second-fastest time of the season at 1:43.36 – 55-hundreths of a second faster than Arkansas’ ‘A’ squad.

Parrish then followed suit in the 200-yard freestyle where she swam the second-fastest time of her career at 1:50.89 to win by over a second to teammate and sophomore Jenny Nusbaum (1:51.98).

Manning carried over her momentum into the 100-yard backstroke where she was 65-hundreths of a second off pool-record pace turning in a time of 54.78.

Bishop rounded out the four first-place finishes to start the meet with a time of 2:01.43 in the 200-yard butterfly.

“We started really well today,” head coach Clark Campbell said. “But you could tell in the second half of the meet, we were pretty tired. We raced really well, but our fatigue showed. I am really excited, however, because in a month, we won’t be as tired, and that comes right in time for the Big 12 Championships – we should be swimming pretty quick.”

After the break, the Jayhawks found themselves in a tight race, before Arkansas began to slip away. The Razorbacks won seven of the final eight events to claim the victory.

Kansas’ lone victory down the stretch came in the 100-yard fly when Bishop blew past they field by exactly one second, finishing with a time of 55.44.

The Jayhawks are back in action Feb. 2-3, when they travel to Ames, Iowa, for a two-day dual meet against Iowa State.