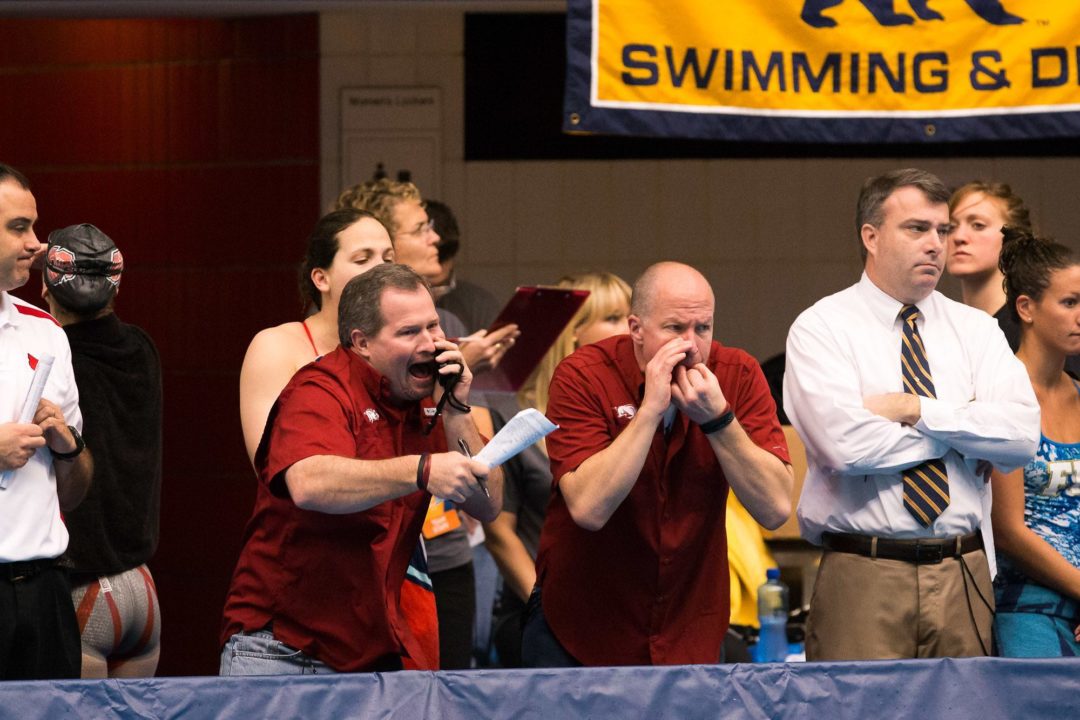 The University of Arkansas women’s swimming and diving team improved their record to 3-0 by defeating the University of Nebraska Cornhuskers at home, 205-95. Archive photo via Tim Binning/TheSwimPictures.com

Canyons Aquatic Club’s Charles Morici will swim for the University of Michigan in the class of 2024.

After starting the season off with wins on the road, the University of Arkansas Razorbacks women’s swimming and diving team captured one at home by defeating the visiting University of Nebraska Cornhuskers 205-95.

The Arkansas women beat the Huskers with strength and depth: the Razorbacks won nearly every event (Nebraska took the 200 fly and 1-meter diving) and scored heavily in second- and third-place finishes as well.

The 200 fly belonged to Nebraska’s Natalie Morris from beginning to end. Morris turned in her fastest time of the season in 2:04.11 and held off a fourth-50 surge by second-place finisher Katie Kearbey of Arkansas, whose 2:04.69 landed her in second ahead of teammate Audrey Golbek (2:07.64).

Arkansas women swept the next two events. Lauren Jordan posted her second victory of the day in the 200 back with 2:03.50; Julia Kucherich and Sarah Easterling both swam season bests (2:05.44 and 2:05.89, respectively) to round off the podium.

Anna Mayfield took her second event of the contest with a solid 4:53.64 in the 500 free. Fellow Razorback Nicole Menzel touched second in 5:00.92. The Huskers’ Bailey Pons was just behind in third with a season-best time of 5:03.56.

In the 3-meter dive, Arkansas senior Kesha Naylor turned in her best performance of the year and earned a zone qualification with her winning score of 291.00. Naylor just edged out 1-meter champ Anna Filipcic of Nebraska, who finished in second with 289.88. Filipcic’s teammate Payton Michaud came in third.

Razorbacks were first and second in the 200 IM: Aubrey Golbek (2:08.18) and Julia Kucherich (2:08.82) fought it out with Nebraska’s Natalie Morris (2:08.93) to see who could get to the wall first. Morris had the fastest fly and breast legs and actually took over second place at the 150 mark, but in the end she was touched out by the women from Fayetteville.

The meet closed with an Arkansas win in the 200 free relay. The foursome of Nina Drolc, Susanna White, Madeline Monroe, and Shelby Cox took first in 1:33.51, a second ahead of Nebraska’s Alexandra Bilunas, Bria Deveaux, Shannon Guy and Taryn Collura (1:34.66).

The Arkansas women’s swimming and diving team is now 3-0 overall, 1-0 in conference play. Next up for the Razorbacks will be a dual meet at Missouri State on November 9.

Nebraska’s record is 0-1-1 overall. The Huskers take on the Iowa Hawkeyes and the South Dakota State Jackrabbits in a double dual meet at home on November 15 at the Devaney Natatorium.