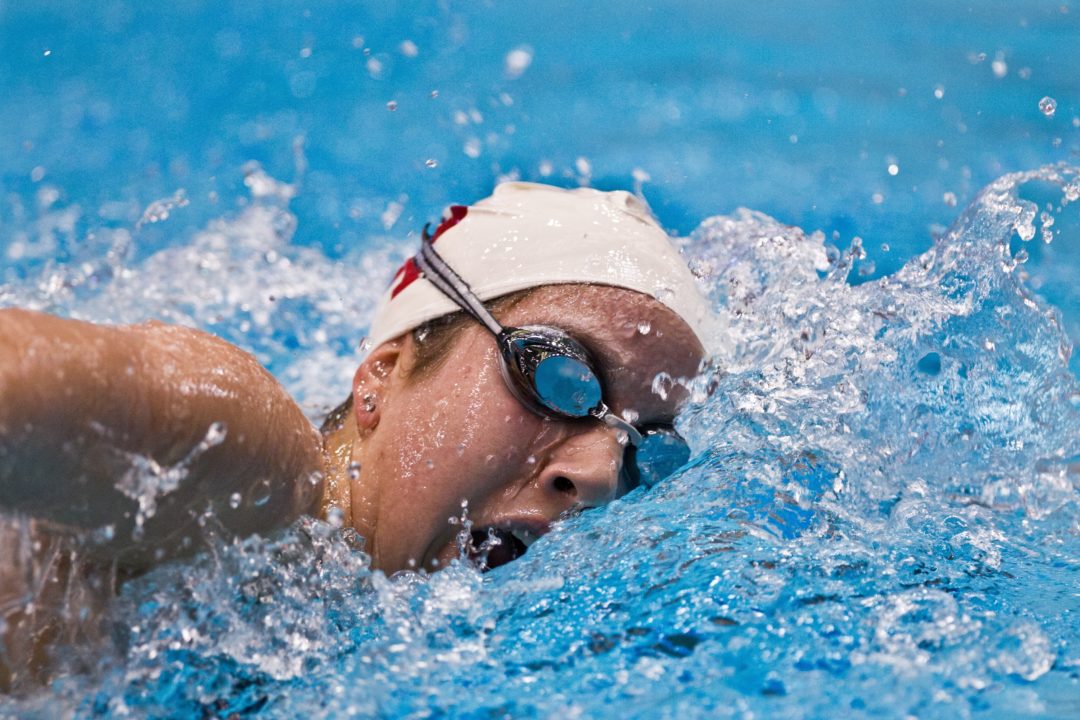 Lauren Jordan, above, is a newcomer at Arkansas, and she's been one of the many beneficiaries of the Hogs' record-breaking rise this season. (File Photo Courtesy: ©Tim binning/TheSwimPictures.com)

It’s time for a SwimSwam tradition: catchup Tuesday, where we go back and catch up on recaps of the previous weekend’s top collegiate dual meets.

The Arkansas Razorbacks claimed a full 16-event sweep and a huge 219-81 victory over the Kansas Jayhawks. The victory in itself was not a huge surprise or all that significant, as Kansas is in a down year after some significant losses the last two seasons and the Razorbacks are having a great season.

What was notable about this win, however, is that it is the culmination of a wildly-successful regular season for the Razorbacks. Their new coach Sean Schimmel was separated from his job at Maryland when they cut the program, but the Terrapins’ loss was Arkansas’ game. Before he even brought in a single recruit of his own, and with the need to hit the ground running as he took over this new program at a university that culturally is vastly different than he was used to, he led the program to a 10-1 regular season record. That breaks the school’s all-time record for the most regular season dual meet wins.

In fairness to history, the Razorbacks had a relatively easy schedule this season, especially given the talent and depth of the SEC. Their only loss was a season-opener to Georgia, though even that result was a respectable 187-113 result without exhibitions.

As for this meet, the Razorbacks got a good performance from their old standby of excellence: the distance group. Sophomore transfer Lauren Jordan (from Indiana) broke the Kansas Pool Record in the 1000 free with a 9:57.31. That’s the best time of her college career and 7 seconds faster than she was at this same time last year. Arkansas went 1-2-3 in this race, though All-American Chelsea Franklin’s 10:14 in third place wasn’t as encouraging as Jordan’s swim

Though they had a blowout win, the Razorbacks looked like a team that hasn’t started resting much for the upcoming SEC Championships that comes in three weeks. Susanna White swept the sprints in 23.8/51.4; Shanna Lim won the 100 back in 56.3 and the 100 fly in 56.4; but none of those times are close to how good we saw this squad be mid-year.

Arkansas’ regular season is done, while Kansas still has a two-day dual with Iowa State this coming weekend.

There has been a dramatic shift from west to midwest/east in the last 10-15 years.
Who remembers the days when the Irvine Novaquatics, Mission Viejo Nadadores, and many other Cali teams dominated the swimming scene?

No disrespect to Schimmel but its hard to give him all the credit for Arkansas’ season as he inherited a very strong team. They returned almost everyone from last year’s team and added significant newcomers such as Lim (a former NCAA qualifier at Idaho), Jordan (an NCAA qualifier from Indiana), and Mayfield. They also picked up a stud sprinter from Slovenia. They knew that this year’s team would be a strong one even before Schimmel arrived at Arkansas…Your article makes it appear that Arkansas was a bad team to begin with however they have been consistently ranked in or around the Top 25 for the last 5 years…

Yeah, but Wouldn’t it be nice if they had a men’s team!!! Thanks Frank Broyles.